So I’m googling “Creepy Horror Games” because I have a love for horror games and I came across these games. I didn’t read any reviews about it or watched any gameplays because I wanted to experience it for myself. Ummmmm, these games are like the definition of weird. I wouldn’t say it’s scary, even though I almost had a heart attack at one point, but it is creepy looking. The fact that they used My Little Pony also made it unsettling. It looked pretty harmless……..THEN the creepy stuff happened. There are a few of these Luna Games. The first Luna Game was made mostly to prank brownies (A male fan of the series My Little Pony). For a while, they thought this game was disguised as a virus. Let’s take a look at each game!

So you start out on a platform level, playing as Luna. The only things you can do are jump and move around. After a few seconds into the game, the screen turns into an image of Pinkie Pie Zalgofied. 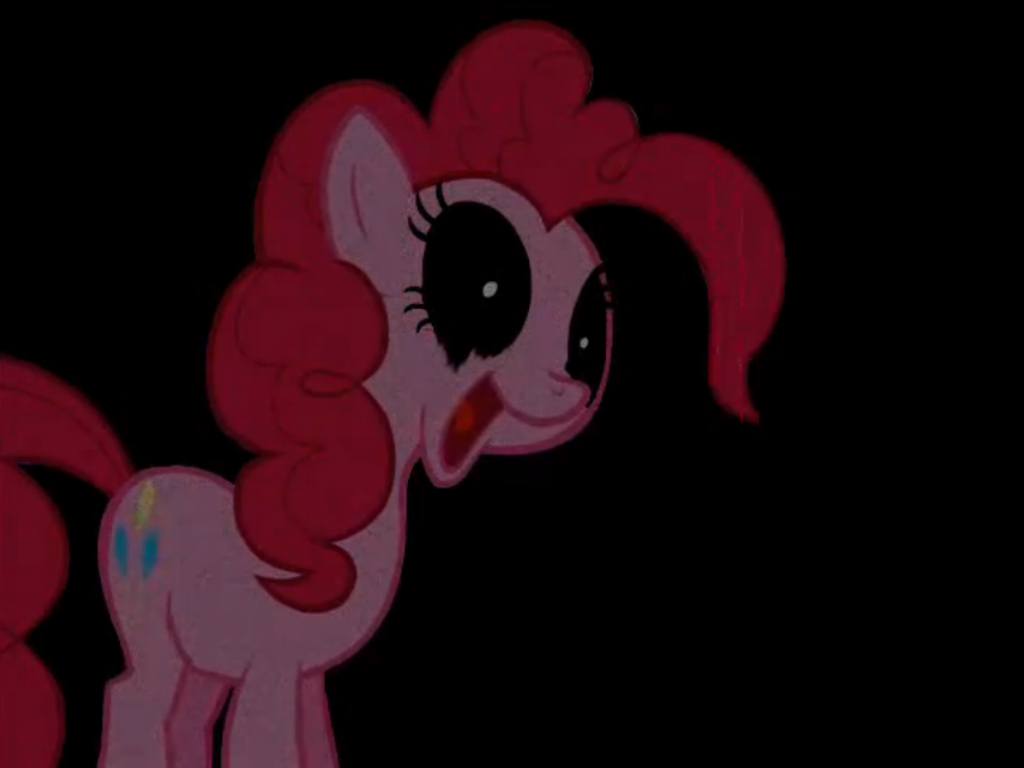 A creepy ass song starts to play, and get this……you can’t escape from the game. IT WON’T CLOSE! I just thought my computer was frozen or something. Then I see my mouse pointer won’t move either. Since this game is made for a windows computer, the only way of closing it was using the Task Manager. If you don’t close it right away, it’ll close by itself after a while.

Here’s an even more creepy part. when you look at where you saved the game, there are pictures and text documents that say ‘The End is Neigh’. It was a pain in the butt deleting them all.

This game starts out the same as the previous one but with slightly improved graphics. So you make your way through the level and cracks start to form in the ground. They start getting bigger until they cover the entire ground area. The screen suddenly cuts to a creepy picture of Pinkamena and then it cuts back to the game. Now the game is tinted with a red color and you start to move very slowly. You walk forward until you reach this big gap in the ground. It looks like the only you can do is fall down into it.

While you’re falling, the screen fades to black and a “You Died” screen appears. Again, you are unable to close the game until it closes by itself. The good thing is, this game doesn’t put unnecessary files on your computer. 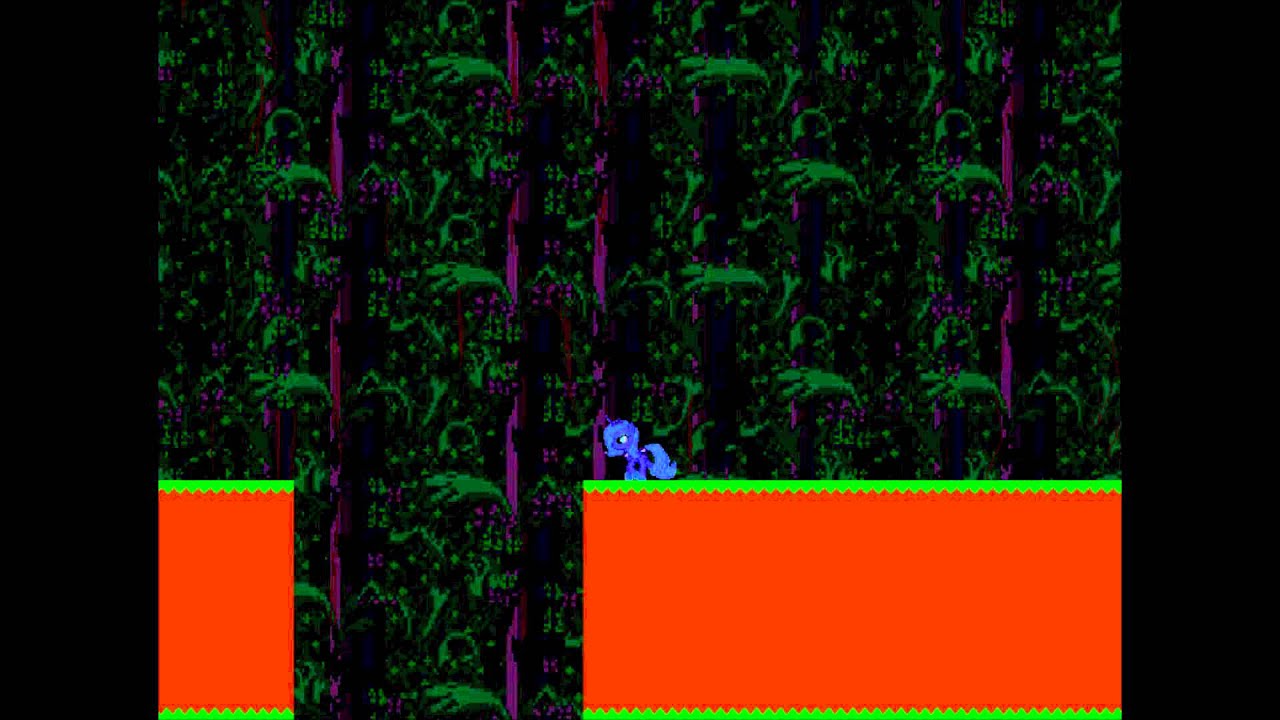 So once again you’re walking on a platform but this time there’s a forest in the background. An annoying, cheerful song is playing while you make your way through the level. After a while, the screen gets darker and music becomes distorted. Finally, the music breaks off. Sooner or later, you come across a big gap in the ground. When you jump over it, a distorted voice yells “COME OUT” at you. The stage continuously loops and forces you to fall down the gap. Another creepy picture of the ponies pop out at you and then fades back to normal. You see Luna lying on the ground dismembered with blood everywhere. She opens her eye and the screen shows a closeup of her face and the game closes. Um, so far these games are creeping me out and confusing me at the same time. 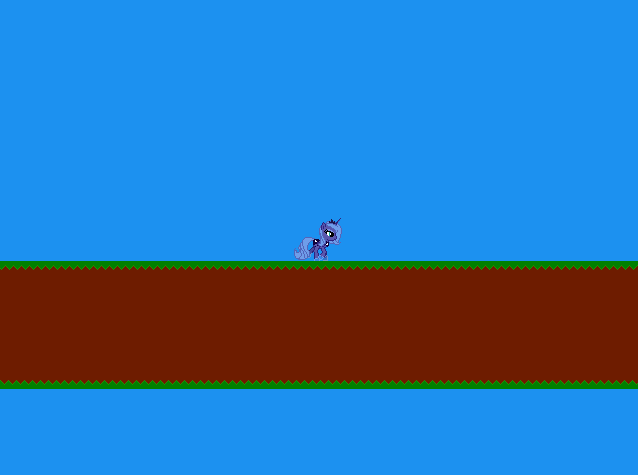 Same thing as before. You’re Luna, on a simple platform, but this time the background is a blue sky. More annoying, cheerful music is playing. The only place you can go is off a cliff????? OK! After you jump off, you hear a splat sound and the screen turns to black. 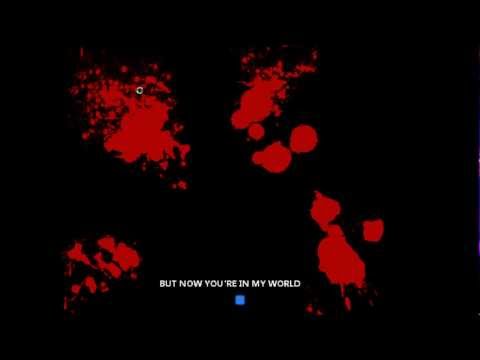 Text saying “You’ve met with a terrible fate, haven’t you?” appears on the screen and then the game closes. So game over???? I tried opening the game again but it didn’t work. Then the game opens itself. The words “It didn’t have to turn out like this…” appear on the screen. Then is says “You didn’t have to die…” Then the screen is filled with blood splatter and shows the text “BUT NOW YOU’RE IN MY WORLD”. 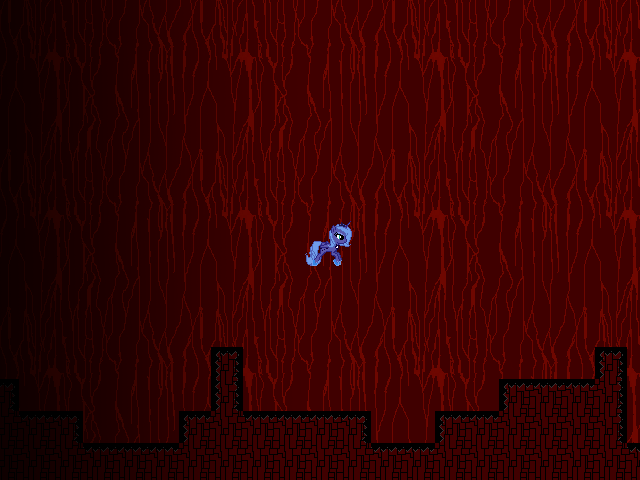 Then Luna is in a new setting and is falling down from the corner of the screen and hits the ground. The whole setting is in red. Now you have to sprint and avoid obstacles while being chased by the darkness. This part was actually creepy to me. It started to feel more like a game. You jump off the ground into darkness below and you are sent to the next stage in the game. This is where it gets really weird. 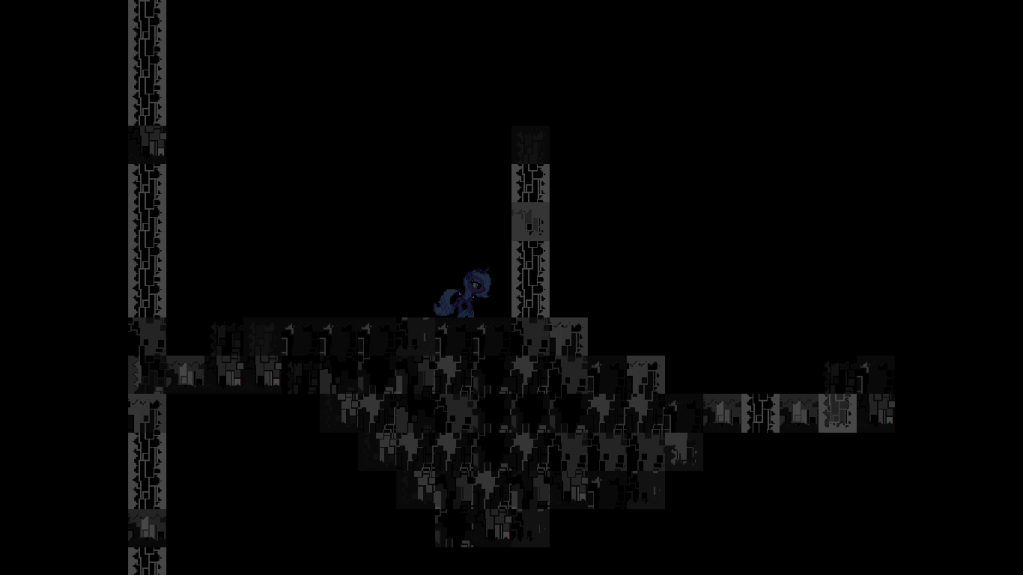 You’re now in some weird, bugged looking 8-bit world. As you continue to make your way through the stage, there is a big wall blocking your way. You have no choice but to go on higher ground. As you go higher, the screen gets darker. When you finally find your way around, you come face to face with Pinkie. She disappears and the screen goes black. You hear the sound of a heartbeat and a picture of Pinkamena fades in. It cuts to a creepy picture of her and back to the original. The game closes itself. If you try to reopen this game, it says “Your fate is already sealed.” So you can’t play this game again unless you delete a file the game created somewhere in your computer’s hard drive. Honestly, that’s pretty awesome.

You’re Luna but in a different setting this time. You start in Princess Celestia’s castle. She tells you to go out and make some friends. You make your way to a grassy area. All the ponies are there for you to talk to and have their own problems that you can help with. You then have to collect 50 items. This was the most stressful thing I’ve ever went through since 12th grade math. After you collect the 49th item, you have to find the 50th one, which is in black and white. When you collect it, the music stops. You continue on and the ground disappears. The screen fades to black and a picture of Nightmare Moon appears. The screen goes back to normal. The ponies tell you that Pinkie Pie is looking for you. When you find her, she tells you that she wants to throw you another party.

When the screen fades back in, you’re standing alone with Pinkie Pie with a red sky behind you. The words ‘B… But… Why…?’ are at the bottom of the screen and her head slides off the rest of her body. Then the game shuts off. Just when you think the nightmare is over, a creepy picture of Pinkamena appears with text that says “This Isn’t Over”. Then the game closes itself. If you try to reopen the game, it says “The past cannot be changed” and doesn’t open. This game is different from all the others. You still start off as Luna and you are walking on grass with the happy music playing in the background AGAIN! While walking, you come across a cliff and jump off. Do you die? No! You land safely on the ground. While walking, Luna becomes tired and walks slowly while the text “I’m really tired” shows over her head. She lays down and says “I’ll just rest for a moment…” The screen fades to black and fades into this white background with only a black line as the ground. You see this 8-bit cube in the air. When you touch it, the ground disappears. Luckily, you don’t fall. The ground and sky starts to build itself while you’re walking. Suddenly, the floor disappears and you fall into this stage that kind of looks like hell.

You get chased by this dark shadow that eats you and sends you back to the original map. Luna wakes up from her nap and see shadows of all her pony friends. When you walk back to the left, you are greeted by this dark blue looking pony and the screens goes black. You are then transported into this map where the background is black and the ground starts to crack and disappear below you. You fall and hear a splat as the screen goes dark. Then you wake up to all your pony friends and realizes it was all a dream.

Then for a split second Pinkamena face changes and the game closes. WORST ENDING EVER!!! I was really hoping for something more gruesome but that’s just me.

Well, there you have it folks. The Luna Games. I recommend trying it out. It isn’t fun but it is an interesting experience. Just so you know, it is not a virus and your computer won’t be in any harm when you play these games. The first Luna Game does save pictures and text documents on your computer so I suggest you save that game file in its own folder instead of on your desktop. It will save you the time of having to find and delete all the files. This game is also for Windows but I’m sure if you have a Mac there are ways of making it work. What I like about these games are its ability to stop control of your computer of a while. That’s pretty scary! The coding for this game was brilliant. What do you think? 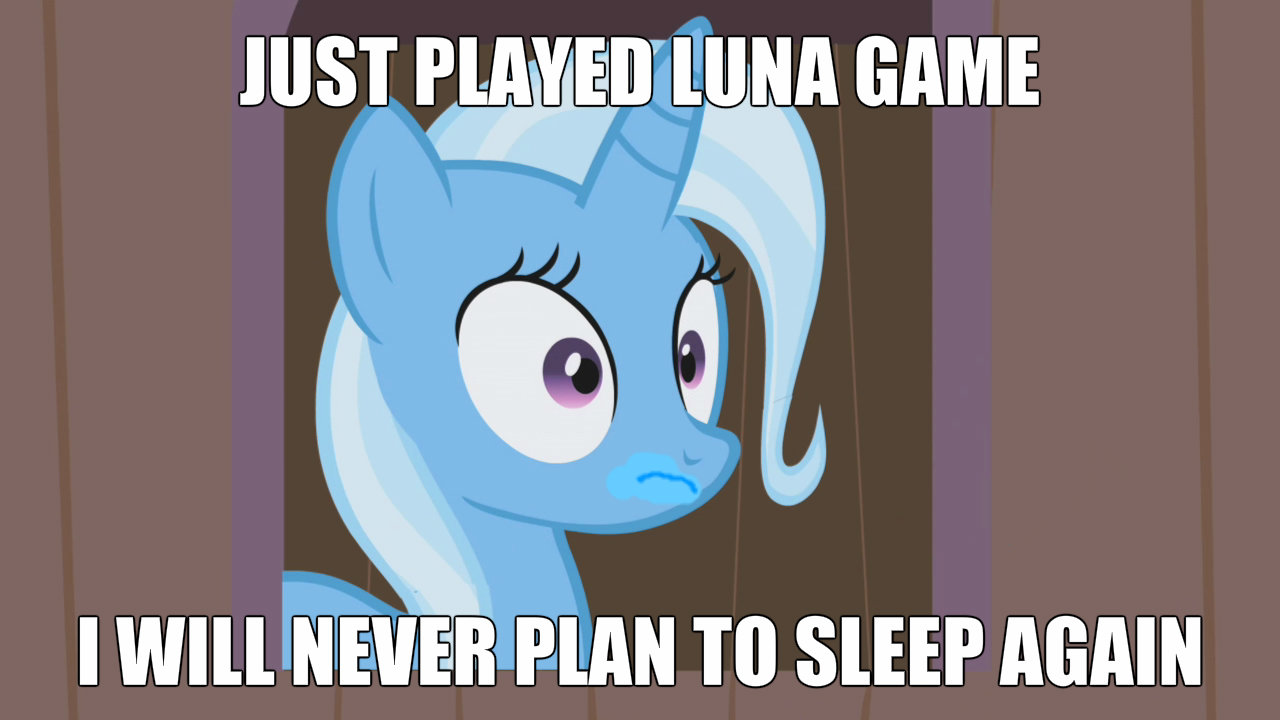