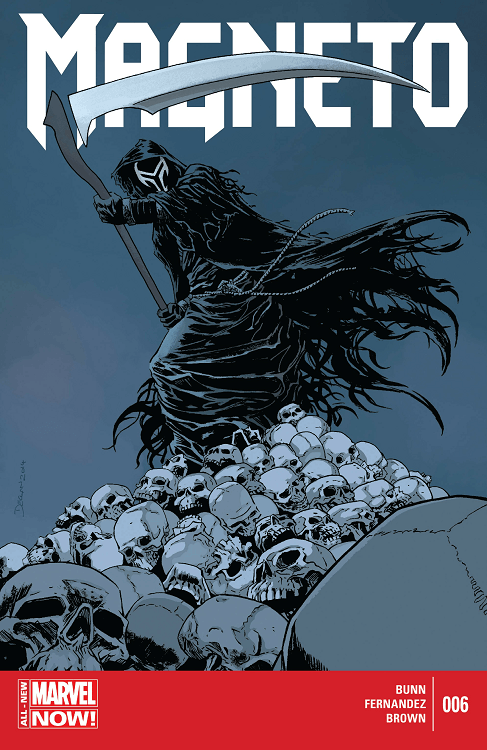 I don’t hold any psychology degrees, but I would imagine one of the many things that separates a sociopath from a psychopath is the ability to craft a well honed plan and execute it. Which isn’t to say that Magneto isn’t without his justifications or motivations, it just means that he’s a monster with justifications and motivations. And it’s pretty awesome to watch. Bunn hasn’t recreated Magneto as much as shown the fine details on an anti-hero / villain we are already pretty familiar with. While this book (and Magneto’s whole existence) has been about showing no mercy to those that would harm mutants, the nuance of him dealing with the Marauders are mutants themselves…sorta, brings another level of complexity to Magneto’s thinking. He is still ruthless. He is still unyielding. But at least he has a plan.

There are two things I loved about this issue and the Magneto book overall. For one, it doesn’t shy away from the fact that Magneto has and always will be a genius. Some versions of Magneto often sideline his intelligence the way previous writers of Storm sideline that she is a brawler or a thief. But in this book, Magneto is always the smartest guy in the room and its refreshing to see him work through those motions compared to just using his ability to manipulate metal to bull-rush his way through every situation. Second, I love how Bunn has shown that Magneto is very self aware of the monsters he emulates. In issue #2, we were shown the parallels and lesson that Magneto learned from a SS officer that executed his friend. In this issue, we see Magneto using the tools of Mister Sinister for his own devices, even while acknowledging how vile the original design was. That isn’t by accident and its fascinating to watch.

If you have been following these reviews, then you know how big a fan I am of this book and this last issue only reinforces that. There seems to be a face to the evil that Magneto is fighting against now and no shortage of brutality that Magneto is willing to use against it.