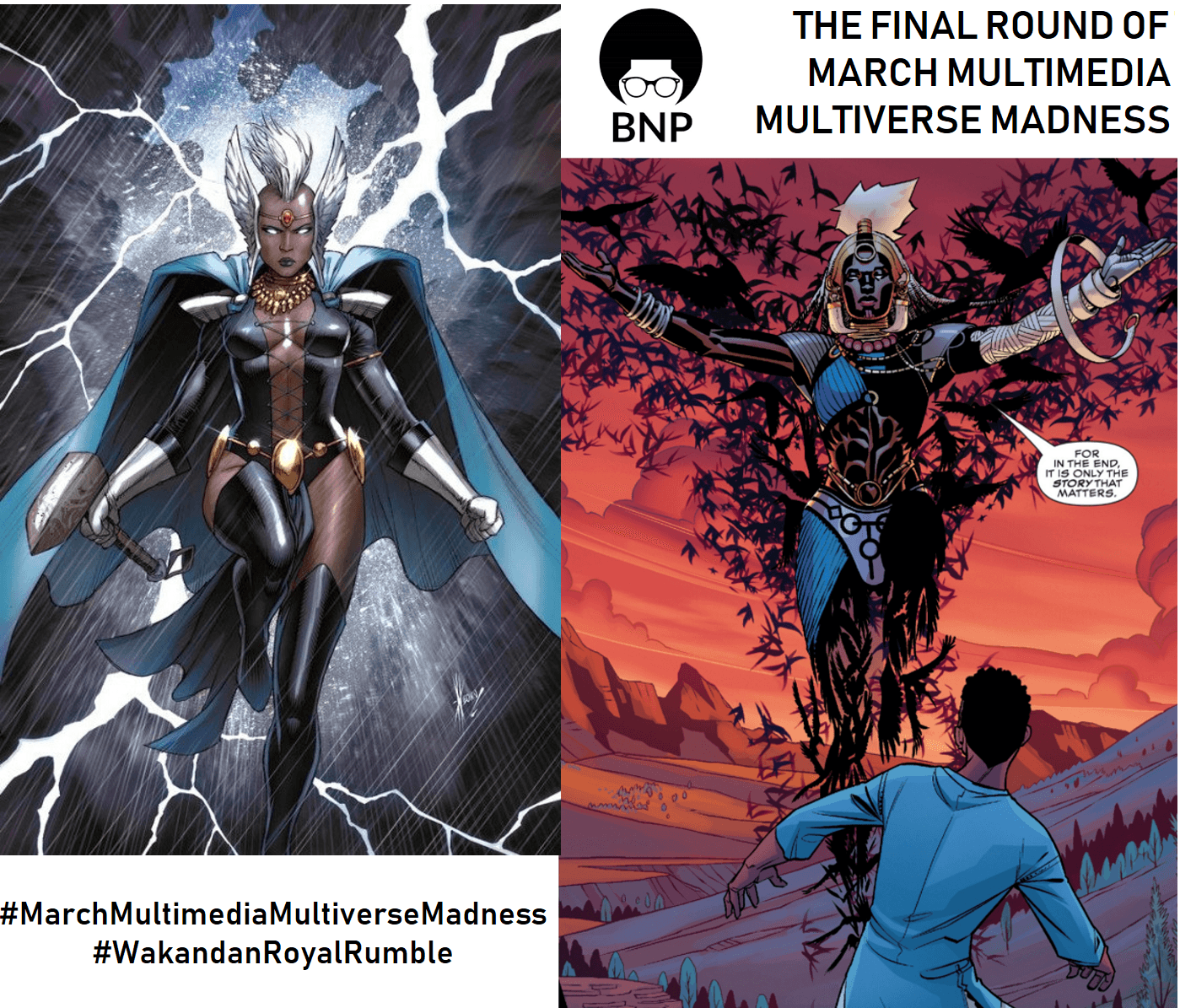 It’s all been leading to this. The #MarchMultimediaMultiverseMadness Tournament has come down to a #WakandanRoyalRumble. It’s Storm versus Shuri, so let’s get right to it. 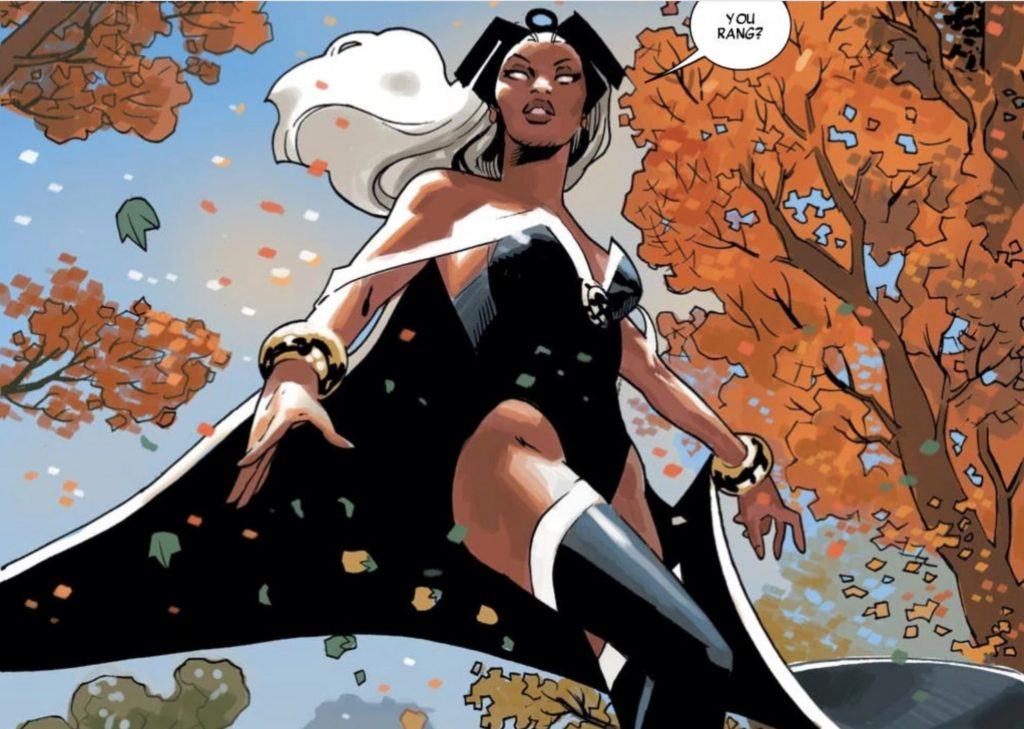 Storm, as transcribed by Ja-Quan: Shuri, my girl, I finally have an opponent worth my time. I finally feel like my talents are being truly tested, and for that I thank you. But don’t get it twisted, you still bout to get this Meteorologist overtime, weather warrior work. You still bout to catch these started from Flea Bottom of Kenya, now we Omega level mutant hands.

Shuri has insane reflexes, speed, durability and healing. I respect it. In Griot final form, Shuri can perform some next level feats like transform into a flock of birds or change her physical body into stone. Storm will have to dig into her extensive list of abilities to do away with her fellow African princess. Storm bout to reach in her bag of fade delivering skills, including her most savagely powerful lightning, wind, water, and physiological attacks to deliver the young ting to the Wakandan morgue and ancestral plane.

First off, Shuri better calm down with that flock of birds move cuz Storm isn’t relegated to one single lighting strike. My girl will conjure up 200 if need be. PLEASE try and flex that giant bird transformation so that thing can get swept up in a category 5 hurricane. I don’t care how massive that crow is, 175+ mph winds will send that creature into the thermosphere, freezing that pile of feathers like turkey the week before Thanksgiving.

And Shuri’s attacked-by-Medusa stone transformation? Man, I wish she would. Storm would raise the water level on Shuri and freeze her into a block of solid ice. Bodied. Storm’s fight with #1 seed, Avatar Korra, already proved how proficient my girl is with Physics. The Nobel Chemistry game, tho! Storm will gladly accept that rock form and hit Shuri with a lethal level of acid rain like she’s never seen in Wakanda.

We talkin offense?! We talkin Harden one on one? Curry from half court? LeBron in the paint? What we talkin bout! Maaannnn, Storm will transform her body into mist that makes her nearly invisible. But real recognize real. Storm knows Shuri’s enhanced senses allow her to see on the ultraviolet, infrared, and electromagnetic spectrum so she’s not relying on that. It is just a tactic to feel her out before she ends this battle and cripples Shuri with a flick of the wrist! Hate it has to be one of the the brightest minds in the entire Marvel universe, but Storm is ready to stop the flow of oxygen to her brain, leaving her in a comatose state.

The only unpredictable aspect of this battle is Shuri’s mastery of technology and ingenuity. Unfortunately for her, any tech that Shuri tries to whip out will be flash frozen before she can say March Madness! I’ll leave this one up to the fans, but Bast knows who the OG is and who the eventual victor will be. Keep leveling up Shuri, and maybe one day you can kick it with the Goddess. 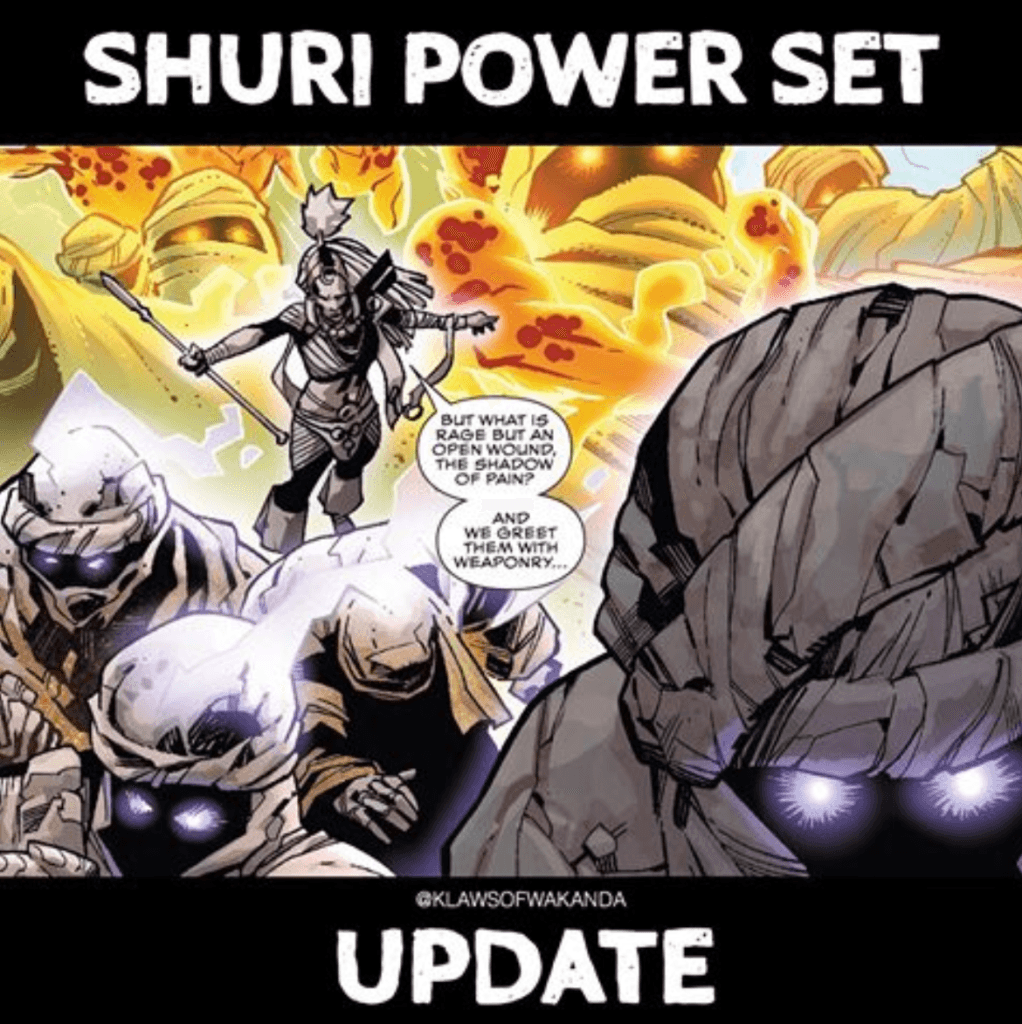 Shuri as transcribed by Lorenzo: This really hurts seeing Shuri having to go toe-to-toe with her ex sister-in-law…but she gotta bring the whole Wakandan spirit squad this time.

Storm is a walking weather channel, but there’s one thing that throws her off her game: claustrophobia.

Storm loses control of her powers if she feels too closed in (hence the divorce). Griot’s got a couple of tricks up her sleeve to take the weather witch down. Griot has the ability to transform into a flock of birds. All Shuri has to do is take flight and surround Storm in a sea of gulls, and she’ll be more shook than raw chicken in a seasoning bag.

Storm could use her lightning powers, but she’s not going to shock herself. Shuri finds an opening and transforms into her human form with rock hard skin (electricity WHERE). With that Shuri can pull Storm down to earth, where her legion of undead Wakandan warriors will drag Storm six feet under.

Shuri will be the mountain that breaks up this Storm. Today’s forecast: cloudy with a chance of DAT WERK.

Storm vs Shuri in an all out battle. Who takes the championship for having the best hands?!