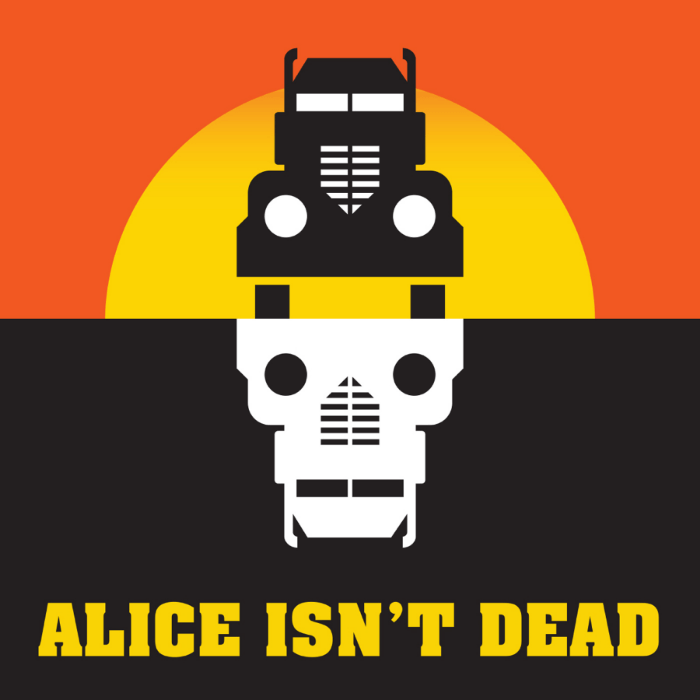 Warning: MAJOR spoilers for the podcast Alice Isn’t Dead. Seriously, if you aren’t caught up on this amazing series I suggest you wait.

So I’m on my way home from work and fighting tears as Keisha (who has just found out that the organization she thought was protecting her from bloodthirsty serial killers is actually all a ruse by the US government), desperately attempts to escape Watcher (who insists on psychologically mangling Keisha before physically doing so), when all of a sudden I realize it: I don’t want Alice and Keisha to get back together.

Don’t get me wrong, it feels like a bizarre conclusion to come to after two seasons of a show literally named for the protagonist’s last shred of hope through a dismal existence plagued by mysterious monstrous beings and inexplicable occurrences. In fact, I’m such a fan of this series that this isn’t even the first time I’ve written about how inspiring listening to another queer (very probably Black) woman struggle with and survive mental illness, heartbreak, and loneliness can be. And yet, here we are at another season finale with Alice ex machina busting in to the rescue and something feels… wrong.


[divider type=”space_thin”]
The realization starts with the nagging question that the episode gets its title from: Why am I still alive? At first, Keisha thinks it must be because there is a role Bay and Creek has chosen for her (very similar to the role Alice’s disappearance forced her into). Then Watcher coerces her into thinking it’s simply an accident that has been allowed by her killer’s own whims. Then finally it seems to be because Keisha herself fights back and refuses to submit to the will imposed on her by others. Except this moment never gets to happen, not really. The answer becomes Alice the moment she steps in and it feels like an insultingly easy conclusion to Keisha’s character arc.

Maybe it’s because I went through my own painful break-up of sorts recently that Alice seems so undeserving of this spotlight. To be clear, I was the Alice. I made a choice that I thought was in everyone’s best interest but instead hurt people very dear to me because it turned out to be selfish and self-serving. Alice is no different. While the truth may be that at the beginning of the series Keisha simply didn’t have the capacity that she does now to comprehend (much less survive) the terror and slaughter brought about by the Thistle Men, Alice still chose to sacrifice the relationship she promised a lifetime commitment to without the input of her partner. Even if Alice thought she was protecting her wife, she chose to undertake two responsibilities that she had to know were incompatible regardless of which came first. It hardly seems fair for Keisha to endure all of this emotional trauma only for Alice to swoop in and acquire her dependency all over again without really earning it. “I was wrong, I’m sorry,” Alice pleads weakly at the end of the episode. “Will you come with me?” As if, given the fatal circumstances, Keisha has a choice.

Don’t get me wrong, I understand the impulse to grab for the representation of a happy ending in a world where queer folks are treated just as dispensable in reality as fiction, if not worse. But I think it’s just as valuable to force your characters to solve their interpersonal problems as mature adults despite the cruel facade of war they’re being subjected to. What I think listeners deserve is more of the difficult grappling with identity and the necessary growth that comes with triumph. Alice doesn’t get to just apologize for the irreparable damage she’s caused and continue on her mission, she needs to really make time to explain herself and attempt to make things right. And then realize if Keisha doesn’t take her back, if she doesn’t forgive her, she has every right to. Because that’s a consequence of hurting someone, even if you love them. You don’t always get a chance to ride off into the sunset together. Sometimes the relationship doesn’t recover.

I’m not saying I want to see anyone punished; I think this series has more than enough proven how wicked the world can be. I do, however, want to learn from Keisha and Alice what I still struggle so hard to manifest in the real world. I want to see Keisha develop even further into a person who, if not completely confident in her own abilities, at least is comfortable in engaging with her fears on her own. Whose reasons for action and living are not wrapped up in one person. I want to see how Alice demonstrates healthy atonement. How she shifts through guilt and longing and finds a way to define herself beyond the life-altering decision she’s made. Because Alice isn’t dead and neither is Keisha. They both still have the agency to be the best selves they can be and in turn teach us how to do the same. That’s why I don’t want Alice and Keisha to get back together right now. Not yet. It should be a choice that’s earned.

You can download Alice Isn’t Dead today on your favorite podcast service.