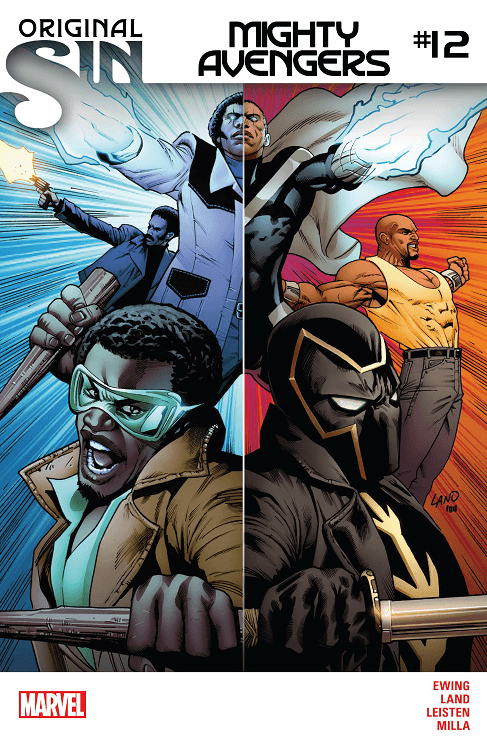 Ewing is the comic book equivalent of Royce Da’ 5’9 to me. Some of you won’t get that rap reference but all I am saying is he is out here doing that work and more folk need to be up on the genius he is producing. We get another look back at the beginning foundation of the first group to call themselves the Mighty Avengers as Jim Lucas [Luke (Carl) Cage’s Father] talks about their encounter with the death walkers. Ewing is great at letting everyone in the group shine and say what you will about Greg Land…but the man can draw some pretty spot on action scenes folks. Amongst the action we get the focus upon Jim Cage discovering there are things in the world, be it mystical, superpowers, or things that get crunk in the night that are beyond a cop’s pay grade so to speak.

Jim confesses to Luke how he felt powerless when the showdown with the Death Walkers occurred, that feeling is one Luke brought back to Jim’s front door upon getting involved in heroics as well.

This scene is really the big draw for this issue man. This is some father son bonding we haven’t seen in comic books done to this degree of excellence (imo)…ESPECIALLY BETWEEN BLACK MEN! (RUN THAT LINE BACK AGAIN. YALL DON’T HEAR ME THO) WE GOT THE SOUL OF BLACK FOLK BONDING IN THESE PAGES B! WE MADE IT YALL!! I can’t help but feel like Al Ewing be pouring one out for Dwayne McDuffie The Stillmatic POC Gawd while writing these issues, talking bout “We eaten now Dwayne….We Eaten baby”.

My only complaint is that I wish there was more than one encounter that brought this originals together. The way it is described is as this one time happenstance. I was really hoping that they would have been a team that had been called together a couple more times. Still, I really can’t express how good Mighty Avengers is. This book is for the grown folk man. This a grown folk ass book with perfectly executed humor, story pacing, character development, and results.

This is the Avengers books I been waiting for and been needing for the longest.