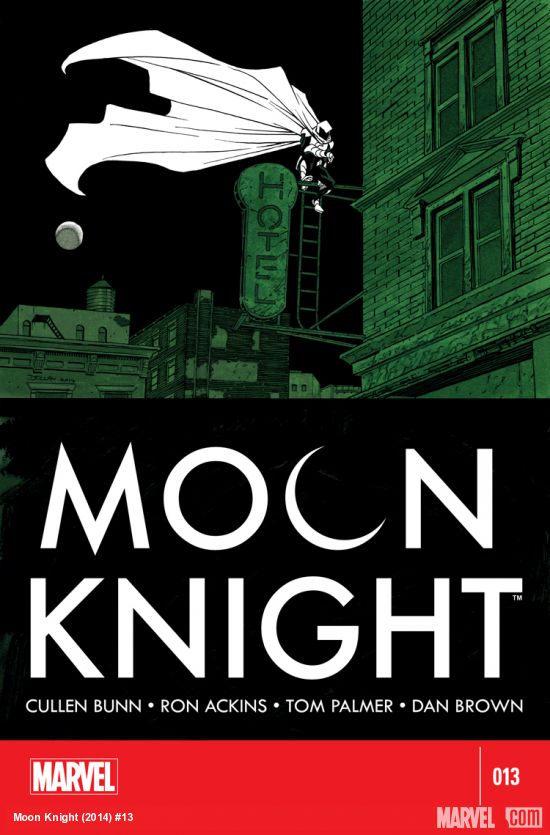 We got a new creative team of Cullen Bunn and Ron Ackins jumping onto Moon Knight this month. This is the second change over but the team still kept the case by case format that Warren Ellis kicked off at the start of the series. I prefer this format because it’s what separates Moon Knight from other books and is just refreshing to see a whole story fleshed out in single issue instead of a spanning too long in five to six-part arcs. This issue we go Ghostbusters as Marc Spector finds his new place of operations infested with ghosts that seem to be going through a tough time. They’re all disappearing due to some force and it now falls on Moon Knight to find out the reason. Apparently Spector doesn’t like fucking with ghosts which is odd considering he is the agent of an Egyptian deity that talks to him from beyond the grave. Khonshu delivers a great line in reminding Spector that though he may be uneasy with ghosts it is his duty to protect the travelers of the night.

The story serves as a good transition to the new direction Moon Knight will be taking. We see him in action busting down an operation that harnesses ghosts for energy. It’s a straight forward issue where we see Moon Knight beating up this gang with relative ease. Ackins art is different from Greg Smallwood (obviously) in that the character of Spector looks a tad bit younger (and like Daniel Craig). The characters physical detail don’t look as smooth and come off a bit jagged, however he totally nails the dark tone of the book. The background is exquisite and dreary as Moon Knight should be, especially after what we saw happen to him last issue. Ackins’ setting a tone of brooding in the surrounding art of the book which I can fuck with.

Bunn is just hitting the ground with this issue so it’s too early to tell what path we are going to see him have Marc Spector travel. I am optimistic about this new team though as we have seen with this issue’s creative take on ghosts being harvested by people, that there are some out of the box villains and people that we’ll be seeing Spector take on this time around.