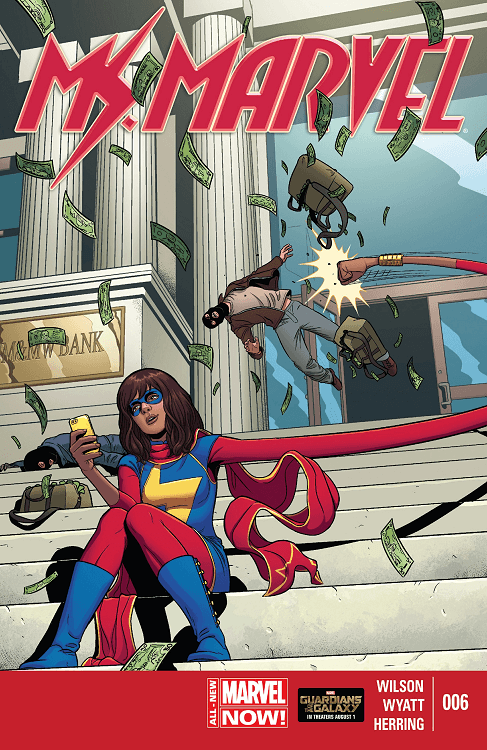 So, as I mentioned in a previous review, it’s no secret that the Black Nerd Problems crew is basically head over heels in love with G. Willow Wilson’s masterpiece of a book, Ms. Marvel. This is the kind of book where any given page could practically the wallpaper for our mission statement. Brown girls kicking ass, breaking stereotypes and conquering their insecurities? How could a title like this get any better? Oh, wait. I know how! They could give us a team up with a top tier character!

Issue 6 picks up with Kamala Khan as a mostly realized, established hero stumbling onto strange things afoot compliments of her first nemesis, The Inventor. As she dives into danger “embiggened” fists first, she bites off a little more than she can chew and gets a helping hand from none other than Wolverine. Because apparently Jersey is the ONLY place left in fictional America where Wolverine hasn’t stabbed someone yet. I guess with “Three Months to Live”, he’s getting that bucket list out of the way while he can. I could easily go all day with the oversaturation jokes about Marvel’s money magnet mutant, but this turns out to be a fantastic team up between the most unlikely pair. Wolverine is fully immersed into Wilson’s stylishly comedic, sometimes Scott Pilgrim-esque world without diluting his character or making him seem hokey.

It’s also big that Marvel isn’t keeping Kamala in her own little corner of the Marvel Universe where she can be swept under the rug into obscurity. Wilson is being given plenty of room to make it known that this isn’t a “fly by night” thing. This Ms. Marvel is here and hopefully she’s made to matter and get more involved the way young Nova is starting to. This week also marks the passing of the artwork torch to Jacob Wyatt who is definitely allowing the look of the book to undergo an organic evolution. He maintain some of the whimsical feel that Adrian Alphona kicked the book off with while streamlining the aesthetic enough that he can play around with a teaspoon of traditional styles, allowing our new hero to look cool running into danger, giving her superhero poses while still adhering to her realistic body type, keeping it clear that she’s a normal teenager at heart.

Bottom Line: Great choice of artist, fun team-up, consistently strong writing…. If you still haven’t jumped on the bandwagon and embraced one of the best comics on the shelves right now, this is a great dive-in point. 9.5 out of 10