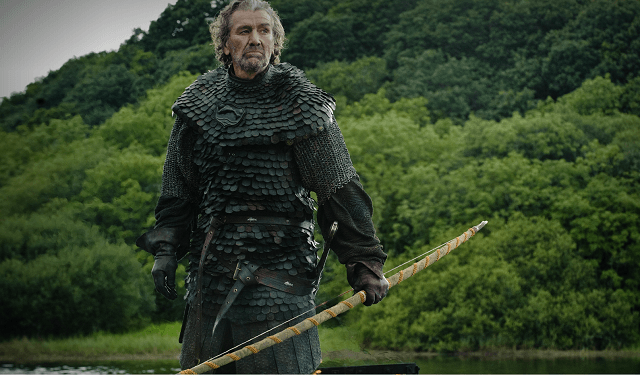 So, I felt a little bad that almost all my favorite scenes were from the first season, even though Season two or four might be my favorite from Thrones. Another scene I can’t really use, but that is definitely in my Top 5, is the one between Theon and Yara Greyjoy when she comes to Winterfell to convince him to abandon the castle and save his own life, but I’ve talked about that in another column. But yo, are there really a shortage of great Game of Thrones scenes?

As a bonus I offer you the opening scene of “Walk of Punishment” and the funeral of Hoster Tully, Catelyn Stark’s father. We never knew Hoster and he was a dying man when the series begins, so the real significance is showing the rest of House Tully and their hierarchy. Like most houses, the line of power is pre-determined by lineage, not by aptitude or ability. Since Hoster was the Lord of House Tully, his death leaves his only son, Edmure (the youngest of Lysa and Catelyn) to become the new Lord, but this scene shows how woefully unprepared he is to inherit that title.

In what could and should have been a somber moment with the Lord of the House Tully floating into the sea in a ready-made funeral pyre, all Edmure needs to do is fire a flaming arrow to set his father ablaze and usher him to the next world Viking style. Instead, the over-confident and headstrong Edmure repeatedly gives funeral rights to the sea itself and not Hoster, as his arrows continuously miss. It gets to the point where the gallery is laughing at the new Lord, and yet Hoster’s body seems destined to ride out into the sea, rotting for an eternity or until some large sea creature comes to the surface. With one arrow left, The Man, the Myth, The Legend, The Blackfish, Brynden Tully steps up to the plate, shoves his nephew out of the way and finishes the job of honoring his brother. Brynden checks the wind, then lets that arrow fly. He knows it’s good as soon as it leaves the bow like Seth Curry when shoots a 3 and runs back down court before it splashes the net. It’s simultaneously fun and serious which gives insight into the personalities, strengths and weaknesses of the Tully men early, well before the dreaded “Rains of Castamere” episode when all those elements are on display.