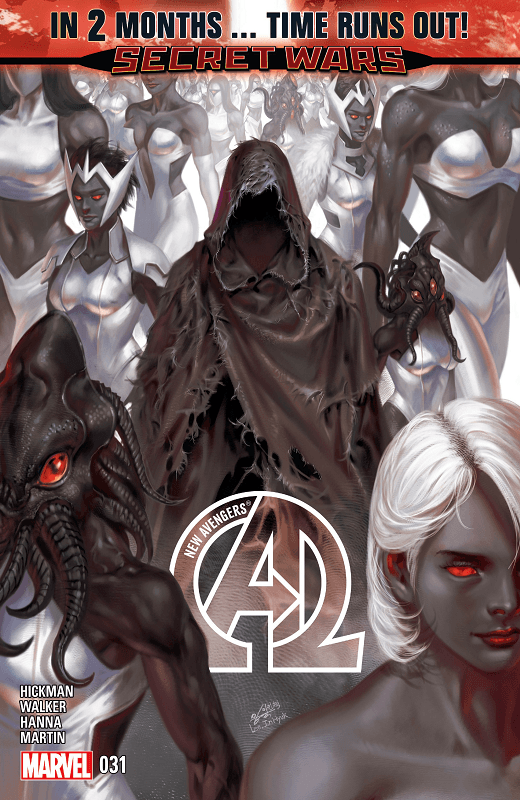 Ok, wow, DID NOT see that coming. Jeez, Hickman is really good at this, the long game that is. This issue centers around Doctor Strange as he leads the Black Priests into the Library of the Worlds, which is fiercely protected by the Black Swans. While this does take the action away from the Illuminati and Avengers/S.H.I.E.L.D., it was a strong issue as we got to see another fabled faction in action and combat. And yo, the Black Swans are no fucking joke. We’re also reminded that the Black Swan we’re familiar with, isn’t actually a Black Swan, but was just adopted by them. She also may have lied about any manner of things, especially the supposed destruction of the Library of the Worlds. Doctor Strange bites off more than he can chew as it plunges the other Black Priests into peril and he, as usual, is forced to face the consequences alone as he’s given over to the “mercy” of Rabum Alal, The Great Destroyer.

***SPOILER ALERT***
Did you know that Doctor Doom was muthafuckin Rabum Alal??? Because I did not. EVERYTHING changes in the last pages of this issue as Doom has been a little busy building himself up as a god (with the help of Molecule Man). Don’t know how he pulled it off yet, but he’s positioned himself to be a huge part of the big fight coming with the very beings that have already killed one type of god.

A surprising and good issue featuring Doctor Strange and his new faction with a huge revelation that begins the work of tying all these loose plot threads together.