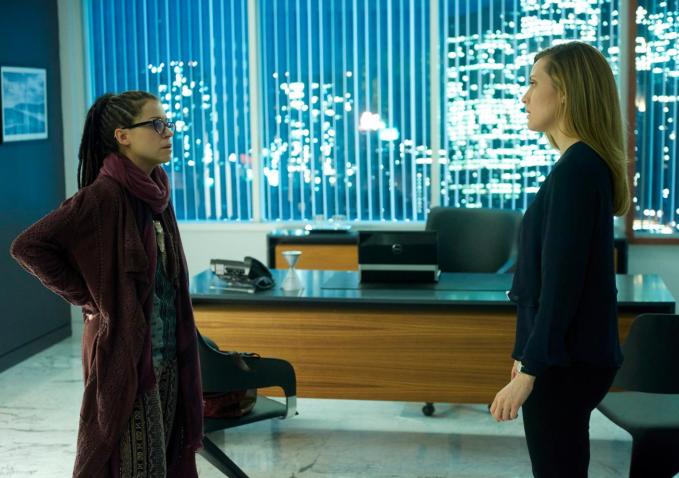 Welcome to the show Krystal! How the hell they find another character for Tatiana to play that’s still completely different from the others? She’s like a mix of Sarah and Alison, if Alison had kept dating “Jage” and Sarah prioritized push-up bras over hoodies. She also talks, a lot. Like she just telling random ass people about two dudes that tried to assault her and killed her friend. I’ve never had a manicure before, but I assume that’s not the type of shit that comes up in casual conversation. So Den Mother is still alive…rejoice…she look like she spent the day with Floyd Mayweather, but she’s, ya know, here. She’s in the cantina asking after the Sestras, but ol girl ain’t giving up the goods. Still, Den Mother is there with Judas from the Agency and he tells her that they have a mole inside of Leda.

Delphine meets up with the doctor to tell him that Krystal won’t be an issue since she’s wrote her own adventure for rationalizing their attack on her. She keeps banging the drum to get rid of 40% Rachel though because she believes she’s still a threat.

Cosima and Sarah are Skype-ing and I was kind of surprised because Cosima ain’t getting mad because the hospital wi-fi sucks. Because she ain’t at the hospital. Your girl up in her boo’s pad, self medicating and acting like vaginal bleeding is some shit that goes away like hiccups. Sarah finally asks her where she’s at and Cosima hits her with YOU DON’T KNOW MY LIFE…sestra.

Cosima at the bae’s house in corpse pose while Emma Frost feeling her aura and shit. Man, who the hell she think she is, Katara?

Rachel and Scott are playing Legends of Catar or some shit while Delphine come in and gotta resist the urge to straight strangle Rachel on the spot. Not out of hate, but because she saw the posting for her position on the HR website and wants to take out the biggest threat to her position.

Rachel will cooperate, but she wants out of DYAD. She proposes using Krystal’s ID to cross the border. To convince them, she reads an excerpt from Duncan’s book that alludes to an organizational connection with the Castor Fuckboys.

Sarah is desperate to get that book and find a cure for Cosima, so she’s down with this plan to snatch up Krystal’s ID and make this thing happen for Rachel. Mrs. S, who has done enough shady shit to know better, warns them that this might be a set up for the wu, but Sarah ain’t trying to hear it. Felix doesn’t like the plan either, but you know how ride or die foster siblings get down, so he gets roped in too.

At the lab, Scott didn’t get the memo that it’s bring your barely a week old relationship boo to top secret hidden way from the public work, day. Ok, we’re pretty sure this illness is affecting Cosima’s cognitive functions too because this shit is absurd. I don’t care how good Emma Frost looks in a hat. And when she’s snooping in the lab, the first book she goes for is the Dune code book? Come on man. Delphine finally shows up and is like…I know you ain’t let a telepath up in our secret lab…

Donnie is teaching Helena how to cook that good yak, but Helena is more concerned with teaching Donnie some Ukrainian sex positions that haven’t made it across the Atlantic yet.

Donnie defuses the 1-sided sexual tension by going into some stand-up routine before leaving. He confronts Alison about Jason kissing CosimAlison from last episode and how that shit needs to be nipped in the bud. Gracie shows up for her first day at work and sees Helena in the back for the first time since she killed her pops. Still, Helena says she can be aunt to the kid they still have coming.

Sarah and Felix are outside Krystal’s place of employment and they’re setting up the con. Sarah is trying to coach Felix on how to run the game, but let’s not act like they been running the streets together this long without Felix being up on the Three Card Molly game. Felix turns that reverse Bond shit on quick. That dude when from Fee to Pharaoh in a hurry.

Scott comes home to his apartment which was designed by Mortal Kombat to find Bladerunner Rudy at his crib. He knows about the book and the code.

Pharaoh ain’t been in the spot for ten minutes and Krystal has told him everything about these Castor fucks already. He is straight up in pre-pipe mode, flirting with Krystal (which is weird as fuck considering how long we’ve seen these two actors being brother and sister on this show). Mr. Steal Your Clone goes to the back room and finds Krystal’s stuff. But she’s also been getting her Sherlock on about the dudes that tried to abduct her. Pharaoh bounces out of there, but not before trying to throw some reassurance at Krystal before he leaves.

Cosima finds out that’s she’s backsliding on the health and into Delphine’s grasp. Literally. But that little reunion is broken up when Scott calls and drops the secret about the book.

Alison and Jason are up in Bubbles having a conversation about the kiss they didn’t have/had. Jason kisses Alison again, but she tells him that No means No (x as many clones as necessary).

Delphine now knows about the book and she is FED UP. Scott lets her also know that they’ve been working with Rachel on the code and Delphine looks like she could go God of War on everyone in the room. Cosima sends Sarah and the crew the copy of the book they told Delphine didn’t exist. Mr. S doesn’t agree with this, but Sarah makes the call to go ahead. They put the plan in motion to extract Rachel.

Scott gets one of his clan members to aid in the escape and these dudes part by doing a forearm-shake. Yo, if you ever catch me in these streets forearm-shaking with someone, I need you to whisper “The Cake is a Lie” in my ear to break the trance. Apparently, I was in too deep.

Cosima’s big diversion was to give Delphine her two weeks notice. But I’m sayin, it’s not like Cosima been doing a lot of “work” lately anyway.

Jason responds to Alison’s text for a little rendezvous, but guess what, that’s just her insecure and possessive husband sending the text on the set up. But you know what, this is why the dog is never supposed to catch the car it’s chasing, because after Donnie exposes the facade, what the fuck was the plan moving forward? Did he think he was going to nut up in front of his drug running boss and tell him to go kick rocks? Naw b, sometimes you gotta make shit a teachable moment…with a broken eye socket and a concussion.

Rachel arrives at Mrs. S’ spot. They are making her translate the whole book before she can get her hands on the IDs.

Cosima and Delphine are going through it, yo. Delphine tries to warn her that something might be off with Shay, but it really gets down to these two still being attached to one another. Delphine, almost, sorta, may be, but probably not, feels sorry for how things are going down when she tells Cosima that she should’ve trusted her.

Rachel is decoding and looking mad tempted with that pencil in her hand when DYAD busts in the front door. Seriously though, how many people have kicked in Mrs. S’ door at this point. Might be time to look for some new real estate or at least kick in for some more deadbolts and impenetrable hinges. They are about to snatch up Rachel when she goes into a seizure and starts wildin’ out on the floor.

Delphine is pissed when they get back because she thought Rachel could be moved without harm.

Well she could, they just didn’t let Delphine know that shit. Doc comes down to tell Delphine that “Rachel” is bleeding into her dome and may never recover. So…it’s safe to say that Delphine has had it. She accepts Cosima’s resignation, then types up, spell checks and submits Scott’s resignation with no help from him at all. She also drops that black ops file on Shay to Cosima like…here’s some light reading on that White Walker you shacked up with. Now get the fuck outta here.

Sarah and crew put it together from the partially decoded message that they gotta go to the source for more answers on this Castor/Leda shit. Which means back home to the UK. And Rachel…Rachel is goooood, well, as good as you can be while rehabing how to use half of your body again. She’s already out of the country and getting tightened up while Doctor is watching over Krystal in a coma. Damn Krystal, that’s fuckin rough, sestra. Helena better not find out about this shit or DYAD gonna look like the Fall of Rome.