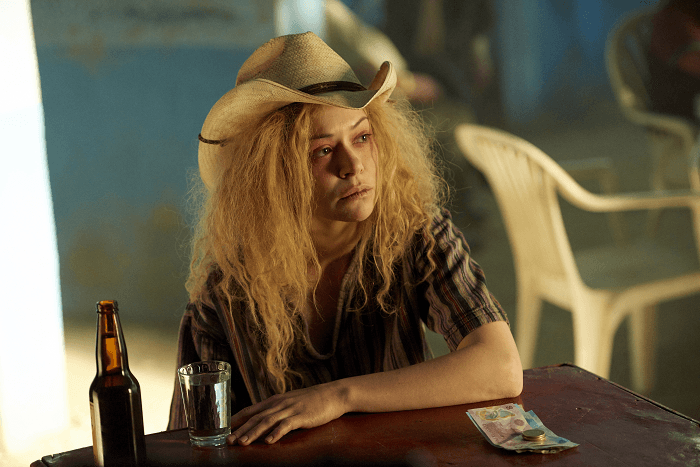 Yo, we finally out of that gotdamn compound, but Helena and Sarah are still in Mexico. Which ain’t all bad, considering that Helena skill set includes beating dudes at dominos for winnings so that they can eat. They’re waiting on one of Mrs. S’ people to come extract them, but Helena is like, yeah, that’s cool and all, but I’m still rocking S to sleep for the long goodnight when I see her. Turns out, the reason the extraction was taking longer is because Mrs. S didn’t send one of her people, she came herself.

Maaaaan, I hope Treadstone spent that extra training on hand to hand combat for Mrs. S, cuz Helena is really not about this bullshit. S. is trying to explain that she made a calculated decision to give her up, but Helena hears is blah blah blah betrayal blah blah blah bitches gonna die tonight blah blah blah. The woman running the catina tells Sarah that this shit might take a while and that she can take a shower while her sestra and adopted mother work shit out…but I don’t know how she just ups and leaves knowing there’s a possibility that only one of them might still be breathing when she gets back.

Alison is practicing her speech while Donnie is doing the monitoring work on her, but ya know, not behind her back this time. Donnie and Jason gotta take 30K to some less than nice people after they get Alison’s mom to sign over her store for their drug front. You know man, just another day in suburbia.

They get to Bubbles, her mom’s store and it’s ironic because that doesn’t exactly explain her personality. Ok, Alison’s mom is basically if Nurse Ratchet got out of healthcare and opened her own bath and bodyworks. Her charm be scaring small children yo. She waffles on signing over the store to Alison and her husband Mr. Chubbs, but to top it off, she got an elect Marci poster on the wall. Alison looking at her like, “I’ve killed before…I’ll kill again.”

Shay and Cosima LAID UP and comfortable while Shay drives a toy car up Cosima’s thigh. I don’t even have an appropriate joke for that…just curious where the miniature car came from…there’s a knock on the door and that shit is not opportunity. Shay answers and it’s Delphine, looking like she just got done starting in a WNBA All-Star game. But why is Delphine like two feet taller than Shay, doooooeeee? Delphine straight looking at her like “I’m gonna talk slow little woman so the words are clear by the time the travel all the way down to you.”

Delphine: I know who you are too heifer[/quote_simple]

Shay tells Delphine what she’s doing isn’t cool and Delphine tells Shay to mind her business and get some sun for once. Cosima ain’t happy about 6’4″ ex-boo coming to her new-boo’s crib but it’s safe to say that Delphine ran out of fucks to give on that subject. They need Cosima to piss in a cup like she on parole or some shit and she’s a little apprehensive about that. And all the while, Shay the Pale Rider heard every word of their conversation.

Jage pulls up and starts the nostalgia tour with Alison again and Donnie is getting fed up. He gets in the car with Jage and they go off toward the deal. Inside the high school where the event is going down, OF COURSE Felix is Alison’s campaign manager. After Marci tells them she’s got the Tea Party vote cuz they don’t take kindly to queers round these parts, Alison gets a call from her mom saying “that her heart is exploding.” Which I call bullshit on because it’s likely she had that thing replaced with a lithium battery in the 70s.

Donnie and Jage are making the drop and of course Donnie drops the ball, let that shit roll down a hill and get ran over by a bus. The money ain’t there because Donnie picked up the envelope for the campaign stuff instead. Jage gotta go get the money while Donnie stays there counting his fingers and reminiscing on the good old days when he always had 10.

Down in Mexico, Helena finishes her meal, which means she got her strength up and is ready for the murdering. Mrs. S, ain’t really about that fight to the death life. Helena start giving her the Mayweather treatment (in or outside of the ring, doesn’t really make a difference at this point) and Mrs. S hits her back on reflex. She’s immediately regretful about it and scoops Helena up like fam.

Alison’s mom is having a panic attack or, more accurately hosting the “me show.” She doesn’t want to sign over the store to Alison and Mr. Chubbs…who we learned took Alison’s name in marriage. Sounds legit.

Cosima shows up to get Alison’s pee, but Alison ain’t there and of course, she’s supposed to be doing a photo op in 5 minutes. Felix convinces Cosima to play along until Alison gets back. Which means, cover up the dreads, lose the glasses and the nose ring, sexless bangs, and a completely artificial smile.

At the lab, its fair to say that Scott is getting tired of the Cosima drama, but Delphine rolls in Rachel, so it at least won’t be a boring afternoon. Scott and Rachel making smoke signals and shit behind Delphine the Tall’s back so that they can be alone to discuss the symbols and the book.

Alison shows back up to the shit show that is now her campaign as blind CosimAlison is doing her photo op looking like she left her Midol Complete at home. Jage comes up in the spot and tells Alison that you can’t pay for 30K worth of pills with her pretty face on flyers and that they might find pieces of Donnie all over Canada if they don’t get this shit taken care of. Alison’s mom shows up to tell her that her Dad isn’t really her dad (no shit) but Alison can’t be bothered with that right now because they might be sawing things off her husband as they speak. She leaves Jage with mom while she grabs the money.

The speeches are about to start, but Alison gotta take the money to the parking lot, which means that CosimAlison has to deliver her speech if Alison doesn’t get back in time.

The money finally came through, so Donnie gets to keep his nose…of course he probably needs a new set of pants and will forever have a fear of paper cutters.

After Marci’s speech which really could have been lifted from CPAC, blind CosimAlison has to deliver Alison’s speech…except she can’t read it…cuz she’s blind. Look, I know we keeping up appearances and all that, but they really couldn’t say that Alison’s sometimes needs reading glasses? This of course causes CosimAlison to go off script, including this gem…

Alison finally comes back and her and CosimAlison switch off-stage. Of course, that leaves CosimAlison to wander the halls by herself, who runs into Jage. He talked Alison’s mom into selling the store, but also sold himself on the idea that she should be pushing up on Alison again. Well, this ain’t Alison, it’s CosimAlison and lets just say, its probably been a long time (if ever) that Cosima kissed a dude. And that makes her want to go pee.

Sarah comes back from the shower in the back to see that Mr. S has some brusies, but at least she still got most of her blood inside of her and Helena is outside thinking it over.

Alison is giving the Families First speech and finally making some headway in her campaign that doesn’t include pharmaceutical drugs. It gets a standing ovation and Marci is thinking she gonna have to make a call to the Koch Brothers to make shit shit right again.

Alison and Cosima are discussing the complications with DYAD when Alison’s Sith Mother comes in with the signed paperwork for Bubbles. Then mom start talking about she might need to move on from Donnie and somehow THIS prompts Alison to reveal Cosima as her clone.

Which is like saying I was so annoyed with my boss at work that I told them I was cheating on my taxes. Like…Alison’s decision making be on some Stark of Winterfell shit sometimes.

Of course, since Alison’s mom is so clueless and neurotic, she just thinks that they came from the same sperm bank and that the dreads make Cosima half black. I…I…just can’t with that shit man. I mean, in the Race Draft I would definitely spend a late round pick on Cosima, but lets not get crazy here. This ain’t how you make up for the lack of Black folks on the show, fam.

In the lab, Scott and Rachel are discussing the secret language that Rachel knows, but Scott’s like, but he didn’t leave it for your punkass, now did he? She can decode it, but she’ll only tell it to Sarah.

Meanwhile, Cosima telling half truths to Sophie, but that’s interrupted because she starts bleeding out in the tub. So, Cosima is having the worst day possible. Her ex boo crashed her new boo’s home, she had to pretend to be running for office in Alison’s stead (while blind), she didn’t even get the pee, and then we end the night with vaginal bleeding. Things are as bad as they ever been, fam.