There I was minding my own damn business, ogling all the brilliant goodies that small-business owners, craft makers, and artists had come to show off at the GeekCraft Expo in Milwaukee this past May when I came across PopMuertos. All my favorite characters from Studio Ghibli, Pokemon, and Disney films were out in full glory, stylized in Day of the Dead fusion designs. It was a beautiful sight. I walked away with a unique Vaporeon sticker for my sister and a No Face print for myself, because I must keep up appearances for the Ghibli trash that I am.

I knew I’d be blessed if I could be granted a more in-depth look of what the artist had in mind when he created these masterpieces. I was incredibly lucky to be given the opportunity to interview him. Seriously, what FANTASTIC answers. I was so happy reading through Aaron’s take on socio-political connections within his art how folx can challenge and celebrate one another through said art. I could just wiggle like a Sudowoodo, this interview made me smile. Please enjoy!

Black Nerd Problems: What can you tell us about yourself? Where did you grow up, when did you get into art, who or what inspired you?

Pop Muertos: A little about me? Sure! I’m a guy who’s trying to balance doing good, putting out positive creative work, family life, and fun. What that looks like in practice is working a 9-5, trying to ramp up my art business, spending enough quality time with my wife and my pup pups, and trying to make the world a better place through organization and community work.

I was born and raised in Milwaukee, WI, (some might know it as “90 minutes north of Chicago,” but I love it), and I’ve been drawing ever since I can remember. As a kid, I lived next to my Grandma, my tias and tios, and cousins and I was very fortunate to have a family that encouraged and celebrated creativity in me and all my cousins. They are all so talented, too, so I learned a lot! Maybe it was the older cousins that inspired me to draw, back then, I’m not sure. Lately, I enjoy the thought of bringing something into existence that has never been before. It’s kinda cool, the process of imagining something… then it enters the physical world because of me and only me. Out of everyone who has ever existed, this thing now is real because I was here. Same can be said about any art form – dancing, singing, writing. It proves you’re here. It adds to our world. It’s great.

Same can be said about any art form – dancing, singing, writing. It proves you’re here. It adds to our world. It’s great.

As for PopMuertos, there’s this ridiculous Pokemon named Ludicolo. It’s kinda Mexican, kinda racist, with the description “although this Pokemon has lots of work to do, it’s often found sleeping and dancing,” or something like that. He wears a sombrero and a poncho, so I thought, you know what? I’ve grown up around all these colors and patterns. Let’s mix it up a bit. What started with that single mashup turned into hundreds of characters, and a few original muertos here and there utilizing a stylized sugar skull motif. 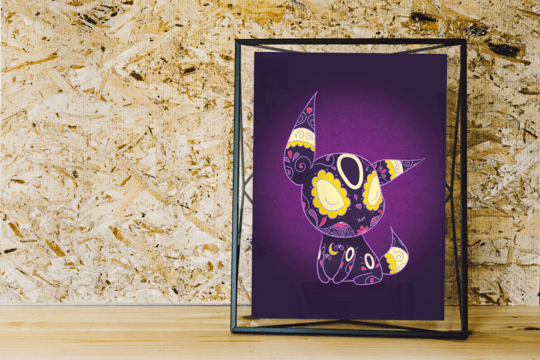 BNP: What is your process like when creating your pieces? Do you fly by the seat of your pants or do you make a pro and con list when deciding what character you want to create in your style?

Pop Muertos: Sometimes I know exactly what I’m going to draw- what pose, what colors, what expression and all that. Those times are rare. Usually, I start thinking about it that morning. (Oh, I do this all live on stream.) So the morning before the livestream, I’m trying to come up with something, or asking people on Instagram or Twitter. I’ve also got a list of requests that I get from people at shows. I draw what I love and it’s seldom based on any pros and cons. I might draw something around the time of a movie release, but it’s always something I enjoy. For an inside joke, one time, I drew Brendan Fraser from The 1999 The Mummy Movie starring Brendan Fraser and Rachel Weisz (shout out to my friends who I see at PNW shows).

BNP: What does your art reflect about your personality?

BNP: Do you incorporate any social or political messages within your art?

Pop Muertos: Great question! While that side of my life is very important to me, it’s not at the forefront of PopMuertos. My art is influenced by the colors, patterns, and culture I grew up with, being Chicano, being Mexican-American, and I don’t separate myself from past or modern history. Considering the state of our world, and our political climate I feel that ignoring politics is one way we’ve gotten to this point, and continuing to avoid talking to each other and sharing struggles is a definite way to stay here. Since everything in our lives is controlled by politics, (healthcare, pay, schools, housing, art funding), sometimes on stream I’ll talk about these issues through the lens of creativity, and becoming who we are meant to be.

My art is influenced by the colors, patterns, and culture I grew up with, being Chicano, being Mexican-American…

We look at geniuses, phenoms, and the all-time great artists. Think about how many people have super powers like them, but can’t grow their talent because they are working three jobs to survive. We think about what talents are denied or lives cut short because an easily treatable ailment goes untreated. Or they’re a victim of the for-profit prison pipeline. These issues are not the focus of my project by any stretch, but when they do come up it’s a good way to begin a discussion on “what our world could be.” What we all could be. I’m just a guy who draws cute things – what have I got to lose in talking to people?

BNP: What two fantasy, anime, or comic book characters would you like to see go toe-to-toe in an all-out battle?

Pop Muertos: HERE WE GO! Totoro vs Snorlax. Battle of the Behemoths. You’ve never seen anything like it! Which one falls asleep first?! Will the Snorlax hyperbeam be too much for Totoro to overcome? Will Totoro be able to tag-in Chibi and Chu Totoro and win with the power of friendship? It’s anyone’s match. Tune in next time!

I’m Aaron and I do a #SugarSkull illustration series!

See more of the artist on his website here.