Last year, Netflix added all six seasons of A Different World (ADW), the spin-off of The Cosby Show. It was designed to star Lisa Bonet in her role of Denise Huxtable, the sometimes wayward and unfocused daughter from the Huxtable family as she attended college at a fictional Historically Black College/University (HBCU). The show, however, morphed into something much more than that.

Before I douse you all in my journey in media and blackness as an adolescent, let’s do some math first (I promise this won’t hurt). I’m currently thirty five years old. The first episode of A Different World was titled “Reconcilable Differences” and it aired on September 24th, 1987, just before my 8th birthday. And just at this moment, I realized how much TV I watched as a young kid. I was raised on The Cosby Show (and training in secret at night to Public Enemy that I got from the older kids in the neighborhood, but that’s another column altogether). I somehow remember having a big crush on Lisa Bonet (1. Who didn’t? and 2. “having” probably indicates past tense as in no longer… but I have no further comment on that) and the fact that she was going to have a show featured on her was pretty amazing to my not-really-knowing-anything-about-girls-except-I-liked-how-they-looked adolescent self. Well, Lisa Bonet, true to form, lasted all of one season of the show, but that turned out to be the best thing for it as it was able to reshape itself into more of an ensemble show. At the time, I didn’t know or comprehend any of this, but what was not lost on me was that I was watching a funny show that had beautiful black people everywhere. Let’s not pretend like that was insignificant. I watched A Different World as a kid and I’m sure I revisited it many times as a teenager and young adult. But with it coming to Netflix, it’s the first time, as an adult, that I can sit and digest what this show was, how it affected me and why it’s so damn important. Here are five observations from binging a large amount of A Different World over a weekend, as a full grown man.

The Game Is The Same, Just Got More Fierce Do you understand that if a show that followed students at an HBCU where the whole point of the show wasn’t about some scandal or treachery or murder, but instead about black college students growing up and experiencing college debuted on a major network in 2015, the Year of our Lord, it would seem like some unfathomable venture? [quote_right]but what was not lost on me was that I was watching a funny show that had beautiful black people everywhere. [/quote_right]Are there “Black sitcoms” on Network TV today? Well, there’s one, but we’ll get back to that. But it would be different than anything on TV right now. But that show, did in fact exist almost thirty years ago. People can always talk about The Cosby Show and its impact and they’re not wrong, but it was the outlier. It was called that because Bill Cosby was already huge and an entertainment commodity that willed that show into being. Bill’s name is all over ADW, but there was no established star frontlining the cast of that show. Jasmine Guy, Kadeem Hardison, Cree Summers… they were all relatively unknowns in big TV circles before this show and Lisa Bonet doesn’t equate to Bill Cosby as someone that could drag them into popularity. The closest that a show came to A Different World for it’s heft and relevance has to be Fresh Prince of Bel-Air, but sometimes the sheer hyperbolic entity that was Will Smith could be a distraction from what the show was capable of. Add to the fact that it was about a wealthy Black family that rarely went head on with the construct of whiteness and racial bias (save a few “impact” episodes) except when it was a punchline (like everything about Carlton or the elitism of Hilary that was almost exclusively showcased as classism).

The show had to be good to last that long and THEY had to be good. When you hear people my age wax poetically when it comes to predominantly Black TV shows at the behest of shows like Empire, it’s because we remember a time where Black folks were on a major network and none of them were being investigated for murder. I don’t watch shows like Empire because I’m generally not interested, but I’m not one of the people calling for its disbandment either. Is it “necessary” television? Ehhhh. I do think Empire is still important and I’m glad that Black people can create iconic characters (like Taraji P. Henson’s “Cookie”). But if you aren’t of the generation of Black kids that grew up seeing smart and witty and successful Black folk go to college, graduate, lead happy lives and still be Black as all hell, then you gotta understand where we’re coming from when we get nostalgic.

Dwayne Cleophus Wayne is the Real MVP for Black Nerds

Season 1 of ADW you have to discount a bit because Dwayne was written like a Terminator sent from the future with only one mission: Not to protect John Carter, but to obtain Denise Huxtable. Once Denise was gone (or Dwayne got the hint), his character settled into a more balanced and nuanced character. His affection was then more directed towards Whitley of course, but overall Dwayne became a character that existed in the real world with his own storylines and motivations. I didn’t realize it until just recently, but I was Dwayne Wayne, fam. Or at least, I wanted to be. Dwayne was smart (brilliant actually), funny, hopeful, optimistic, sweet, awkward and eventually charismatic. He was also a horny college kid at an HBCU (we’ll come back to that too). Dwayne was relatable for a young Black man like myself in all the ways that young Black men on TV in those days were not. Somehow, Steve Urkel is still some aesthetic symbol for the nerdy Black guy. Fuck Steve Urkel. Steve was the punchline, Dwayne delivered them.

Steve was a cartoon that hijacked a Black family sitcom because ABC figured out how to sell T-shirts and suspenders. Dwayne was the moral center for a positive show about Black folk figuring out adulthood. Unlike the Cosby Show which would throw in a Martin Luther King Jr. speech at the end of an episode for Black History Month, A Different World handled social issues head on, often putting Dwayne at the middle of them (like the “Cat’s in the Cradle” where Dwayne ends up in jail for fighting a racist who keyed a slur onto his car or the “Honeymoon in LA: Part 1” episode where Dwayne is arrested during the riots after the Rodney King verdict). And of course, one of the top 5 Black men on TV moments of all time, when he crashed Whitley’s wedding. I’d go on, but I’m still raw about that scene…

And that Atmosphere Be So Black

ADW is the Blackest show to ever air on a major network. If you equate Blackness with ratchetness or how many insults a character can hurl a minute or how many people a character put their gun on or being poor (no offense Good Times, still love you though) then fuck you very much. Doesn’t mean there aren’t real contenders like Living Single, Girlfriends, 227 and maybe even Martin, but I still put A Different World in the catbird seat. ADW is the Blackest show because it celebrated Blackness in ways no other show really has. These are young Black adults trying to be successful, flanked by wise Black elders just living their life in an unflinching Black way. If there’s a knock on A Different World, you could say that it is a privileged perspective because it focuses on characters that are mostly of means at an institution for higher learning. They did address some of that later with additions to the cast and their backstory (Jada Pinkett, before the Smith, comes to mind). But discrediting a show because it’s focused on students getting college degrees is a critique I’m sure any of the folks involved would welcome.

The Black royalty on ADW is monumental as well. Gladys Knight, Patty Labelle, Diahann Carroll, Lou Myers and if you want to go there, Tupac Shakur; all were either semi-regulars or cameos. At times, it was like Harlem Nights the TV show. Now, as a cisgender, heterosexual Black man who has overdosed on Black Girl Magic a time or three, I won’t pretend that my viewing experience and lens is dominant or default. But I personally have no idea how as a pre-teenager (around seasons 5 and 6) how I held it together watching so many beautiful Black people on screen consistently. When Cree Summers showed up some years later on Fresh Prince of Bel-Air, I thought, Hey, that was like crush number 4 from ADW (in retrospect, 4 is far too low of a ranking for Cree on any criteria). Also, in season 2, there’s a step show. You’re welcome Black America.

[quote_right]Somehow, Steve Urkel is still some aesthetic symbol for the nerdy Black guy. Fuck Steve Urkel. Steve was the punchline, Dwayne delivered them.[/quote_right]As I mentioned before in talking about the greatness that was Dwayne Wayne, ADW went head up on social issues. A lot. Lest we think that a show with a predominantly Black cast only dealt with racism, some of the most memorable episodes dealt with other really hard to talk about topics. The “No Means No” episode title speaks for itself. The episode about Domestic Violence. The Black Bourgeoisie (a constant with Whitley’s character, but a more serious topic in the later seasons). The episode where they broke down a lot of the false stereotypes about HIV and in turn, chipped away at the taboos that dog women’s sexuality. They covered alcohol and drug abuse, as well. ADW was a comedy, but it was a comedy rooted in the very real world and didn’t shy away from the real world challenges for young people making their way through the world.

Bill Cosby created A Different World (though Debbie Allen is largely credited with its success). He has limited writing credits early on for the series. These things are true. But it’s not his show and definitely doesn’t showcase a man with over a dozen rape allegations as a loving and nurturing father of five. If you’ve read this far and your complaint is that you don’t believe Bill Cosby ever did anything wrong, let me save you valuable bandwidth and time: I don’t care that you feel that way. 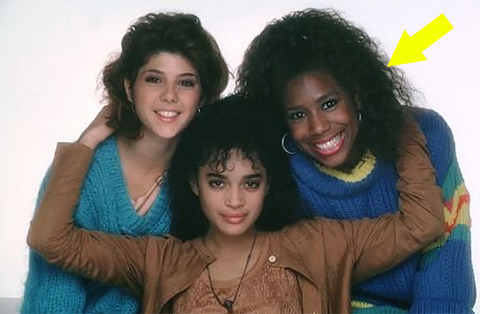 The point is, for ALL the problematic stuff that Bill Cosby has been in the afterglow of The Cosby Show, watching ADW that simply has his name on it is a lot less problematic than watching the show with him in all his vanity. Looking back, The Cosby Show was the building of a monolith that might have waterlogged and decaying plywood on the inside. A Different World feels like the streetwise kid that drove around the drug dealer, inherited some of the blood money and then built a legit business that gave kids in the hood gainful employment. I can live with that.