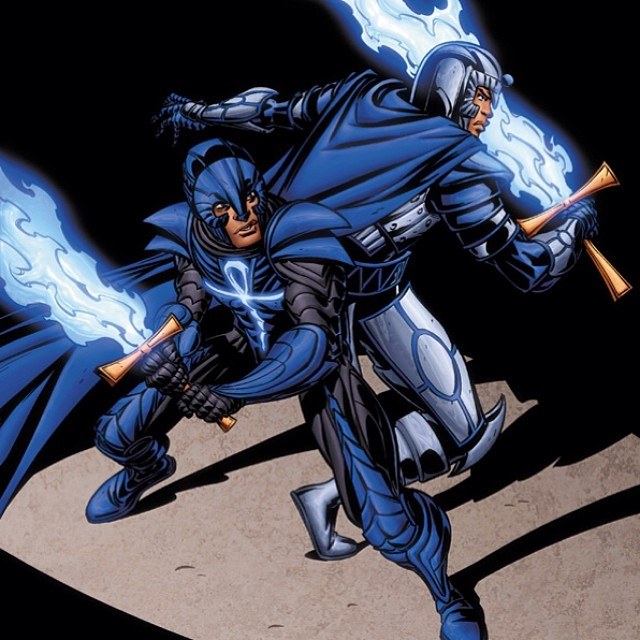 I was lucky enough to get my hands on a Preview copy of Legend of the Mantamaji, Book Three, and it wraps up the origin story of our hero, Elijah Alexander, nicely. I’m going to avoid giving too much away in this Preview: The suspense of what happens is really well drawn, and key to the fun. If you want to it all to be a surprise, just know that Book Three doesn’t disappoint.

This is a graphic novel series that sets out to create a new Black superhero mythos and succeeds. It does so with a balance of good vs. evil, and enough grey area to keep the reader guessing. The art team of Brandon Palas (artist), Andrew Dalhouse (colorist), and Deron Bennett (letterer) do a good job, turning in a high-quality look and feel that is unique but also easy to follow. There are plenty of male and female characters, with the Mantamaji and their Sanctuant sisters working well together as the male/female halves of the universe. That is one of the key things I like about the series: that it doesn’t just have a female side-kick, but female allies that have their own different powers and purposes. In a work that wants to build heroes, this one gives us heroines too, ones that aren’t cookie cutter, or watered down. This is a fun graphic novel that is suitable for readers 10 and up.

As you expect, Elijah collects the last ounces of power that will make him able to stand up to Sirach as he learns the final lesson:

[divider type=”space_thin”]
Syndey plays a significant role too, initially as a typical girlfriend hostage. But that quickly changes and she comes into her own. This is one woman who feels more at home with a gun in her hand. A big one: With Sydney holding it down, Elijah pursues Sirach to stop him from completing his plan. It takes all of Elijah’s power, plus a few tricks he learned from Noah, for them to have any hope of winning. It is a great climactic battle, befitting of all of the epic build-up. It ends with plenty of room for a comeback by Sirach, but thankfully without any of the angst that these origin stories sometimes carry with them.

Once the dust settles, Syndey and Elijah are reconciled, bringing back together one handsome couple. Book Three closes with a lead-in to future books. The Mantamaji and the Sanctuants are on the scene to stay.

Book Three is officially available on February 11. But you can go to the Legend of the Mantamaji website and order it digitally today.

With the close of Book Three, Eric Dean Seaton is already at work on his next project – a live action short of the action. Seaton’s background is in movies and television, so this is sure to be a high-quality production. I look forward to being able to preview that before it hits the streets sometime soon.