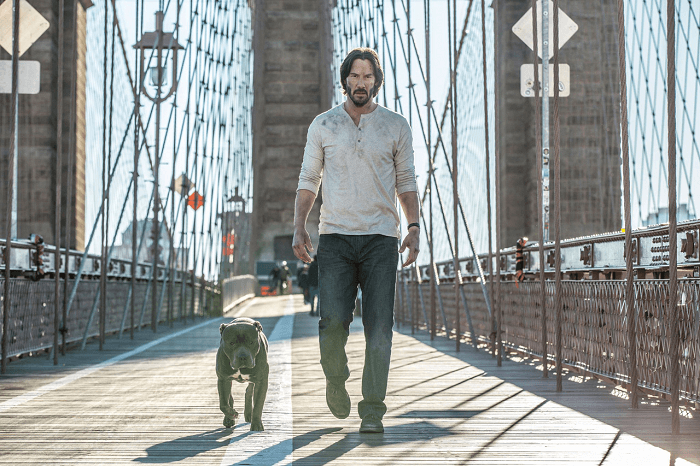 I can’t imagine there’s a person that saw John Wick, liked the movie enough that they wanted to see the sequel and expected John Wick: Chapter 2 to be anything but more of the same. As someone that really dug the first movie, this is not a bad thing. The core parts from the first movie are intact: Keanu Reaves in the titular role is the unstoppable killing machine, the acting is still pretty wooden, and there is an endless supply of gun toting dudes that are just waiting to get double tapped to the dome by Wick. But even if this is a continuation of the first movie, it wouldn’t be fair to categorize it as a clone. The ante is definitely up this time around, as John, once again is thrust out of his un-retirement, this time not for vengeance, but for a job he doesn’t want to do but is left with little choice. Whereas the story from the first movie was pretty straight forward once the action started (dude gets wronged, dude decides to kill that wronged him and each and every person that would hinder that goal). This time around, there’s much more murkiness about how John gets back on his murder game again, and then, the fallout from each decision he makes just compounds the situation further until we run out of film.

Make no mistake, the film is completely built hyperbole applied to a realistic world. John Wick is not disqualified from being a superhero because he kills people, but basically because he can’t fly. Other than that, he basically possesses superhero capabilities in his perception, reflexes, and ability to never, ever, ever miss an open shot. But the myth building that is John Wick and this sequel are part of what makes the movies so enjoyable. You hear about a legend from everyone, everyone knows the legends, and then, for two hours, you get to see the legend in action. The opening of the movie sets the tone for the rest of the movie as John apparently, just wants to get his car back, but that involves murdering or severely crippling about three dozen men to do it. What I enjoyed about, well let’s just say it, the killing in the first film is that the gunplay and choreography seems to be an extension of John Wicks’ body. In John Wick: Chapter 2, there is even more melee combat and car scenes than the first, both of which are visceral, with the car being used as a tool of combat much like the guns have been. There’s also quite a bit of sprinkled humor throughout, which, a movie that lets the protagonist kill what must be about 200 people during the film, surely needs.

Perhaps my favorite aspect of John Wick is the world it exists in. You could say the death merchants, protected hotels, tailors that will customize your suit with reinforced body armor on your Italian two-button are part of a seedy underworld. But there is nothing underground about these folks living multi-million dollar lifestyles. There is an appreciation to detail and what a network this intricate and professional could look like when we watch John arm himself for battle. In cuffed trousers. That also includes the supporting characters. Some returning like Ian McShane, the Manager of course. But also the inclusion of Common, who seems to be just about John Wick’s equal in ability (which was sorely needed) and Laurence Fishburne, a former “maintenance man” like John who has taken his operation in a different direction. They all add a layer of depth to a pretty cool and far off world.

Nobody in John Wick is going to win any acting awards and for some the exponential body count might becoming numbing, but it is a movie that is so aware and flourishes in its own style, while never drowning in it. Regardless of how Keanu sounds when he’s not killing someone, he looks great while he is doing exactly that. The choreography is fluid and never static. The set pieces look spectacular. Even in the midst of John taking out two dozen men at a time, there always seems to be a unique death en route that makes you sit back and say, “I did not see that coming.”

John Wick: Chapter 2 fulfills the promise of a sequel to a movie with high octane action with a slightly more evolved plot that doesn’t bog down what you really came here for. To watch John get his gun off. And he does it. Again. And again. And again. Considering how the movie ends, I’m sure we’ll see even more of that in the future.