It’s time for Ro and Mo’s Fantastic Convention Review! Kicking ass and cosplaying in the DMV (and anywhere where they have a McDonald’s in close proximity)!

Another year, another Katsucon: This year’s National Harbor convention proved itself to be one of the best conventions in the States. It brought thousands of eager fans and talented cosplayers from all over. I was unbelievably excited to attend such a magnificent event, and to my delight, so were my fellow nerds.

All aspects of Katsucon, from my experience, was smooth, pleasant, and downright fun. The staff was helpful and the panels were HILARIOUS. I’m talking jaw-dropping, eye-popping, barely can breathe, tears rolling down my cheeks funny. (Voice Actor’s Lip-Synching: HELL YEAH, GIVE ME THAT BOHEMIAN RHAPSODY, GIVE ME ALL OF IT!)

With no regrets, I emptied my wallet for the brilliance of gorgeous scarves in the Artist’s Alley. I marveled at the collections featured in the Dealer’s Room, as well as judged the fact that many of the characters on the body pillows on display were underage. (Seriously, WTF?)

This year, I also had my buddy, my partner in crime fighting, my buddy Ro, help me navigate this overwhelming convention. It was comforting having my insightful and hilarious friend join me at her first Katsucon ever! I was lucky enough that she was able to offer her analysis and opinions on what exactly Katsucon brought to the table. She’s a true convention buddy, and I am happy that she was able to join me this year!

I am always reluctant to go to cons for a myriad of stupid reasons (I don’t want to spend money! Well, budget your spending and you’ll be fine. What if I have a terrible time? When has that ever happened to you at a con?! I want a really good cosplay to bring to the table, but I never seem to make it work in time! Stop procrastinating then, jackass!) and I always have a great time when I’m convinced to come along. I have only ever been to Baltimore’s Otakon, but it seems that Katsucon isn’t much different: show-stopping cosplays, the ever-swanky Gaylord hotel, and one pretty awesome panel made this con an absolute blast.

Any Way the Wind Blows

Katsucon is a three-day weekend event but since I made it there by Friday evening, after a night of half-assed planning, con festivities began bright and early Saturday morning.
[quote_simple]“Uh, so what panels do you want to go to?”
“Um… I dunno, what about you?”
“Hmm…not really sure…I’ll keep looking.”[/quote_simple]
This was the theme for most of our conversations Friday night onward; none of the titles or descriptions in our fat book of Things to Do at Katsucon really rang out to us, but we decided we would give at least one panel a chance. The Voice Actor Lip Sync Battle was one of the few panels that stood out to us as an interesting possibility, so we decided to give it a shot. We sat in a nearly full room with voice actors from a wide range of anime including Kill La Kill and Dragon Ball Z, waiting with low hopes and low expectations. I don’t know what I expected, but what I saw wasn’t it—it was better. The panel started off a little slow but exponentially increased both in pace and sheer brilliance. A classic rock rendition of Poison’s “Talk Dirty to Me,” an accurately outlandish performance of Miley Cyrus’ “Wrecking Ball,” cult favorites “Bohemian Rhapsody” and Rocky Horror’s “Sweet Transvestite” — the song choices were only outmatched by the hilarity of the actors silently performing their own choreographed routines to absolute perfection. This ended up being the only panel we stuck with, and we loved every second of it.

We Didn’t Start the Fire

It was Saturday afternoon around 1PM when we started seeing Facebook posts asking about a fire evacuation in the Gaylord. We were comfortably nested in one of the hotel rooms far up above the con itself, doing our hair, adjusting our cosplays, relaxing and gearing up for several hours of Katsucon fun when I received a text from a friend asking if we had left the con yet. Allegedly there were sirens going off in the convention, but we had yet to hear them and considered staying in the hotel while the situation resolved itself. It didn’t resolve itself; once the sirens finally kicked in on our floor, we decided reluctantly to race down the stairs and make a straight beeline for my car. Dozens of con and hotel staff guided us to safety, keeping the crowds controlled and flowing with ease. There’s nothing quite like running through the National Harbor and seeing every restaurant, shop, and indoor parking garage tightly packed with a flurry of costumes and dismayed, painted faces—and there’s nothing like running through single-digit weather and blustering wind while wearing a heavy coat, let alone barely anything but skin-tight clothes and makeup. This is the point I decided to let go of any regret over not cosplaying this time around.

Maybe They’re Born with It

There was so much amazing cross-play and gender-bending awesomeness going on I could barely keep my shit together. Just seeing people of all ages, sizes, identities, and creeds come together in a safe space to get nerdy with each other—seeing so many people be so happy and so comfortable in their own skin in one place— is one of my favorite things about conventions. I am always in awe of this when I come; anyone can be a superhero or a princess or a warrior or an inanimate object or a mildly animate object or anything they can dream up and bring into reality for a weekend. Walking past photo shoots and even in and out of the hotel I saw so many creative wonders it was hard to figure out where to look at all times, and I was always worried I would miss something even just by blinking. Some highlights include these homemade Disney princess dresses from the recent Cinderella reboot. 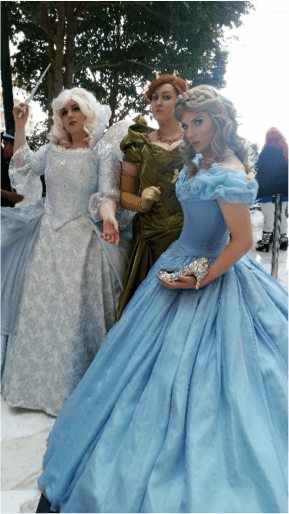 Another favorite of mine was Gaige, the mechromancer character from Borderlands 2, complete with her own Claptrap unit. 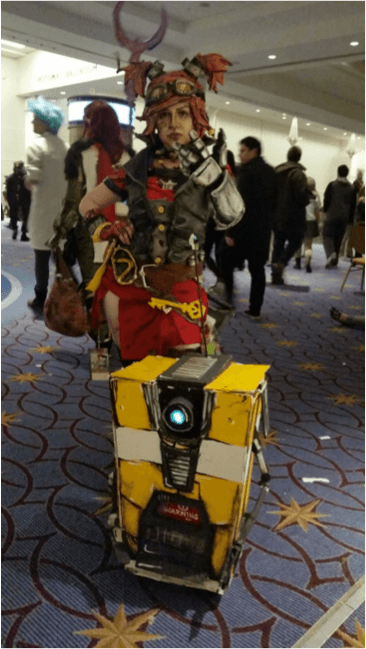 Also, this guy with the glow-y tentacles…no idea who they’re dressed as, but I loved them!

[divider type=”space_thin”]
Despite my limited knowledge of anime, I saw a lot of characters I wanted to see in full, as well as a whole world of characters I would never see in my wildest dreams, and I have pictures to prove it. Well, some pictures…I spent so much time admiring with my eyes that a lot of the time I forgot to whip out my phone for pics!

My fear this trip was that it would wipe my funds, but that wasn’t 100% the case! I just happened to wipe most of my funds before I got to the Dealer’s Room. It took some serious, almost militant restraint in the Dealer’s Room and Artist’s Alley not to buy everything I saw, but even just window shopping I had a blast, however; body pillows, stickers, cosplay items, even some seriously cool pipes for…ahem, tobacco use only, folks! You can ball on a budget here—waiting ‘til Sunday to buy the good stuff can mean some decent discounts from plenty of vendors, so even if you don’t think you can afford anything at the con at all, just you wait ‘til the last day, when everyone is trying to get rid of their merchandise! I wish I had planned more in advance so that I could have bought a Battlestar Galactica flask and Commander Adama poster, but I will just have to keep this in mind for next time (so say we all)!

The Good, the Bad, and the Ugly

The Good: It’s hard to pick just one thing about this con that made it so great, so I’ll pick a few. The volunteers and con staff were all so great at keeping everything running smoothly, despite the lengthy evacuation into the freezing cold, they deserve major props. It also says a lot about a con that I would have had a blast even without having gone to any panels; just being amongst a community of wonderful people all at their nerdiest was satisfying in itself.
The Bad: My biggest disappointment is that I missed out on killer cosplays of Geralt, Ciri, and Yennefer from The Witcher 3: Wild Hunt, which only came to my attention when a stranger we ran into told us (and showed us) a killer picture of Geralt. I think this also says something pretty significant about the quality of this con—the worst thing I can really say about it is that I didn’t get some pictures I wanted to. I will say, I wish I had cosplayed at least for a little. If I come to Katsucon again, I’ll have to keep the weather in mind for a warm cosplay, and I extend that advice to anyone thinking of cosplaying in the dead of winter when there could be a fire emergency driving everyone outside at any point during the con.
The Ugly: There was some vandalism at the Gaylord (aside from the fire incident, which allegedly had nothing to do with Katsu), but I suppose there is no concrete evidence that con goers were to blame…however some of the nasty comments online makes me really wonder who is capable of what in this group of wild cards. I can only hope that the Exit sign torn out of the ceiling and a wall being punched in are acts of a rowdy rock band and not of my fellow army of costumed nerds.

Overall, I loved Katsucon! It’s not as big volume-wise as Otakon (which is my only point of reference for anime conventions, really), but it packs the same punches; panels, video rooms, Dealer’s Room, Artist’s Alley…the works. Come to the con in cosplay and someone will be bound to recognize you, you’ll find all kinds of things both in and out of your price range that you would potentially die for, and you’ll have great conversations with great people and have a kick ass time. I would highly recommend the con to enthusiasts of all natures, gamers, comic book junkies, and anime lovers alike. 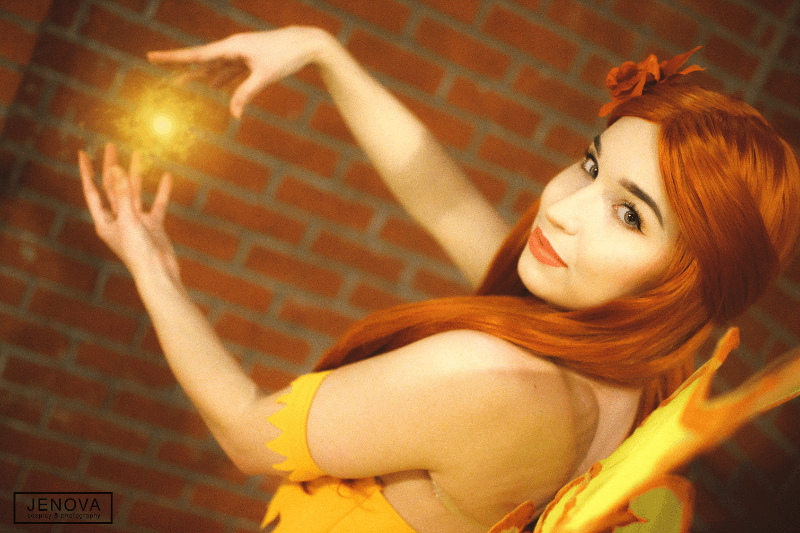 Special thanks to Amethyst Flare Cosplay and Yakfrost Cosplay!

***This article was co-written by Rosemary Palack***