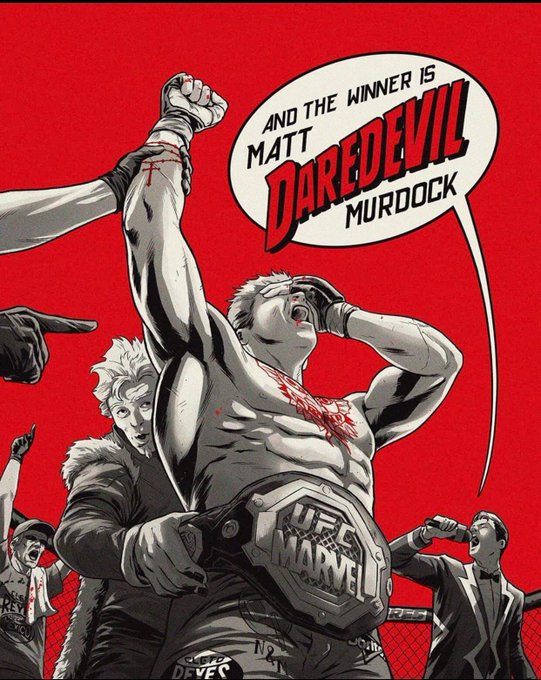 There are three things certain in life: death, taxes, and people debating over which heroes would win in a fight against other heroes. Are you even a comic book fan if you’ve never gotten into an argument with folks over which character had the better hands? I mean we’ve all been there, right? Well Boom Studios artist, Rodrigo Lorenzo Lopez is taking it a step further and bringing Marvel hand-to-hand faves to the UFC octagon. I stumbled upon Rodrigo’s Instagram and saw his Marvel UFC series creation. It’s so damn brilliant yall.

Rodrigo reimagines Marvel’s martial arts experts as UFC fighters, posts their stats, pits two heroes against each other, has fans vote for who would win, and it keeps going until there is a single champion. This Marvel UFC series should have been done ages ago but I’m so glad Rodrigo Lorenzo Lopez is putting it into the world now. When I tell you I hope Rodrigo Lopez keeps this shit going for the long haul, know that it is all of the truth. Ready to check out the fighters? Me too. Let’s introduce your referee for this event. 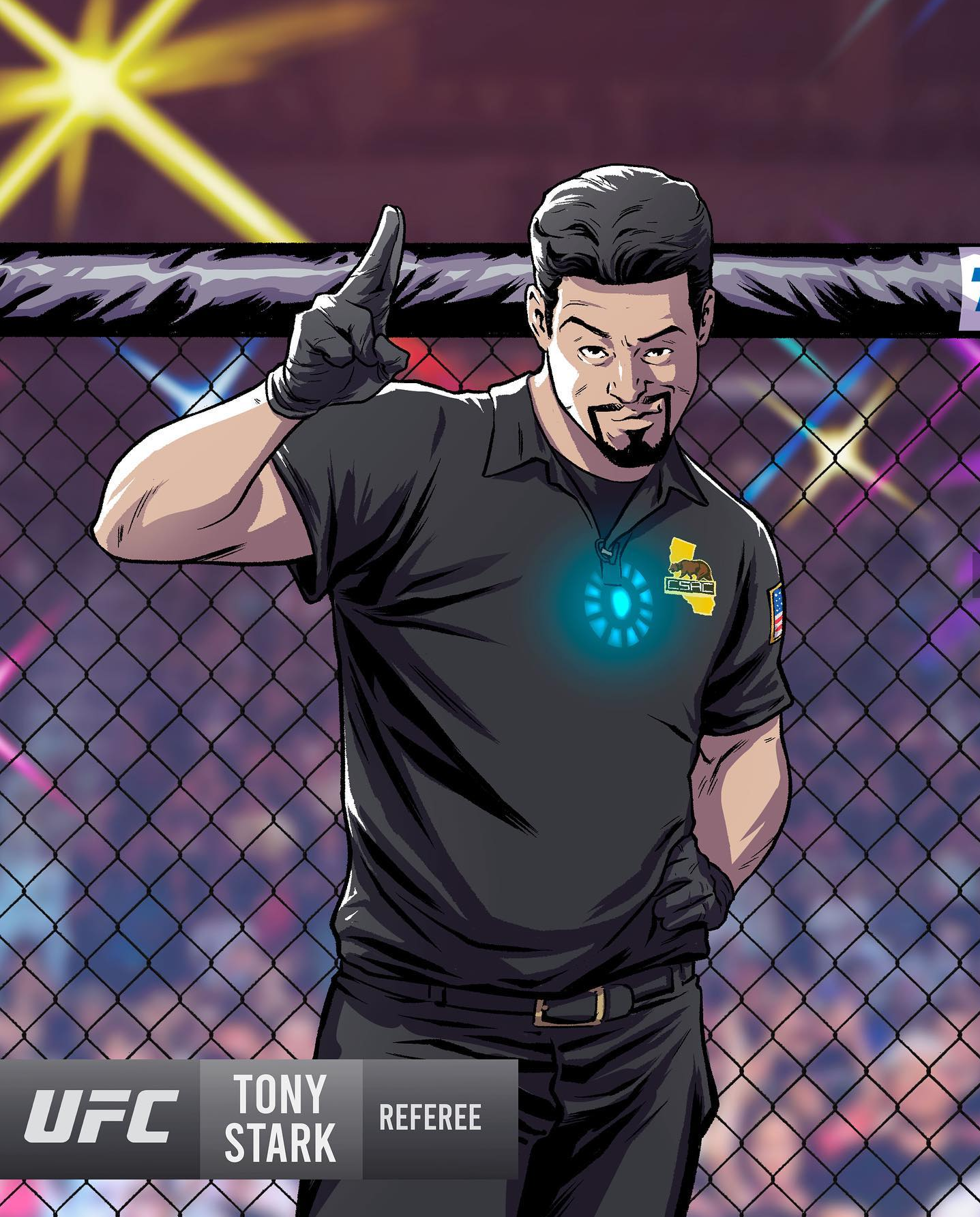 Black Bolt announcing on the mic?! 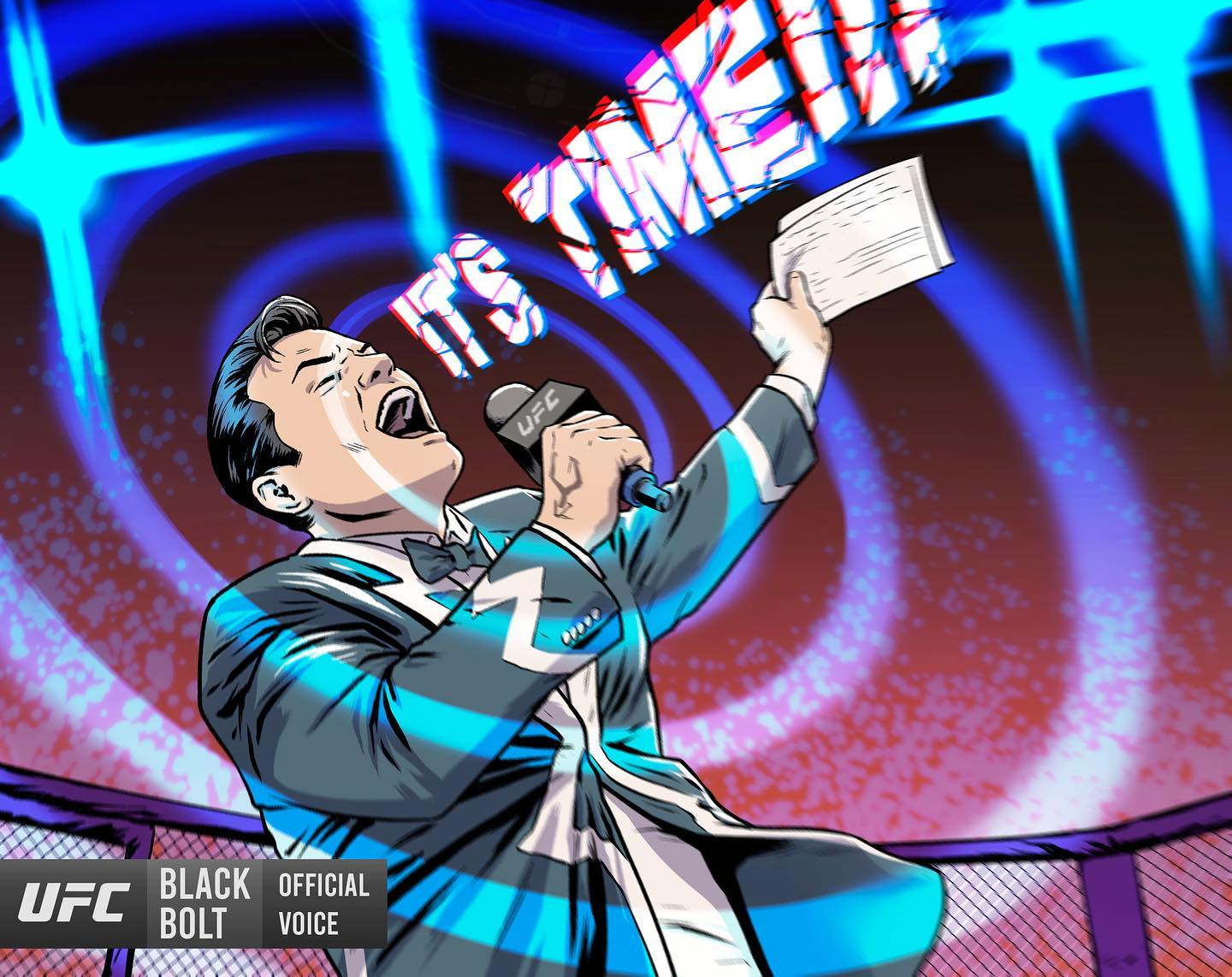 Tony Stark as the referee makes so much sense. One of the most meticulous men in the Marvel universe, Tony isn’t going to miss a tap or call for a stoppage. Look at the glow under the shirt and the state commission insignia on the shirt! Black Bolt as the Emcee in place of Bruce Buffer? The beautiful sense that this makes! I love when characters are so well placed and themed. You can tell Rodrigo put a lot of thought into this. Now let’s get into the fighters!

The Muhfucka Without Fear 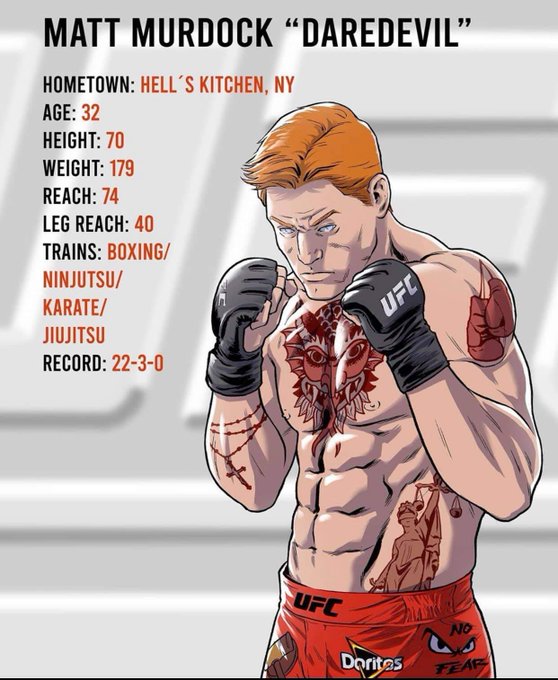 Let’s. Fucking. Goooooo. “All I see is murda, murda” Matt Murdock aka Daredevil: The Man Without Fear is up in this muh fucka. Listen, I’m not even going to front on my bias. Daredevil is my favorite hero, Top 5 Dead or Alive, and the man I believe to be the gawd of MMA in Marvel Universe (article on that coming soon). I grew up watching Daredevil beat the breaks off people in and out of his league. All while blind. I fucks with this man heavy.

This whole Marvel UFC Series would be a sham without double homicide with the hands Matt Murdock. Look at the rosary beads on the right forearm! That right-hand heavy with catholic guilt knock-out power. Devil across the chest so you know it’s fucking trill. Matt got his daddy’s boxing gloves tat’d on his left shoulder and lady justice tat’d on his side. You step to Matt Murda, please believe you goin’ feel that “liberty and justice for all” one-two combo. Step to Matt Murdock and you goin’ tap the fuck out to The (Arm)Bar Exam.

Look who showed up for challenge day 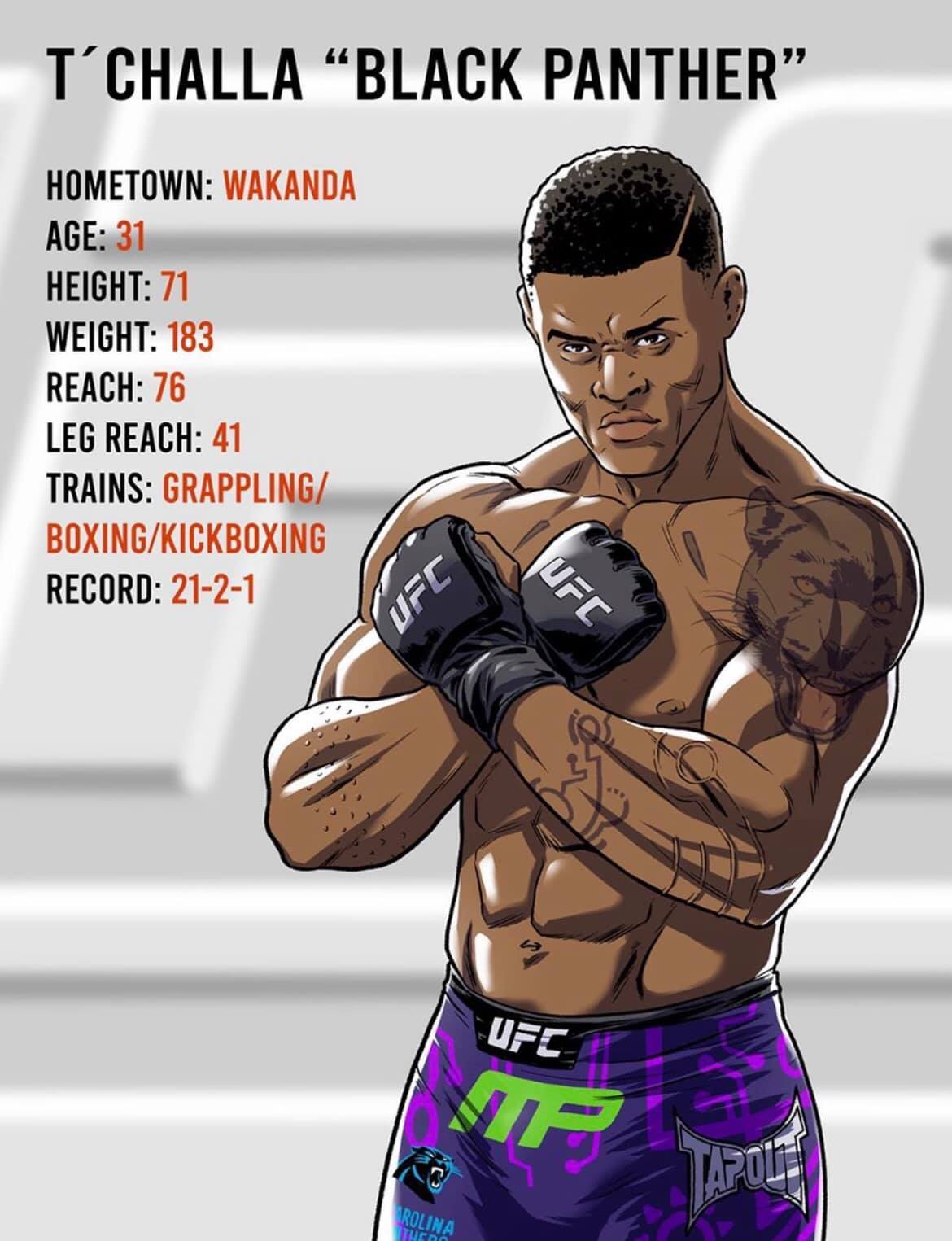 Yeah, the UFC series get’s quiet when the big black cat in this mutha fucka, huh? T’Challa, The Black Panther. T’Challa in here mean-muggin with a big Black Panther tat on his shoulder, Wakandan tats, and Killmonger’s scarification on the left forearm. Yeah, thas a man I don’t ever wanna see in the cage. T’Challa can fight something fucking nasty. Dude’s taken down a Super Skrull (that was trained to kill him since birth) on his lonesome. Then when he got surrounded by more Super Skrulls, he counted them mutha fuckas, and said, “Hmm I’ma need my sword for this shit here.” What?! They sleep on the skill of this dude. He created his own fighting style from a fusion of Wakandan and K’un-Lun (where Iron Fist was trained) styles with a hint of Bruce Lee. Who does that?! T’Challa does that shit. Ya arms are too short to box with the Bast! It’s an honor to hear that man’s accent asking you “Do you yield?” as you lose consciousness from a triangle choke. That’s a regal ass-whooping, nobody wants to be bequeathed with.

“The Catcher of The Fade” 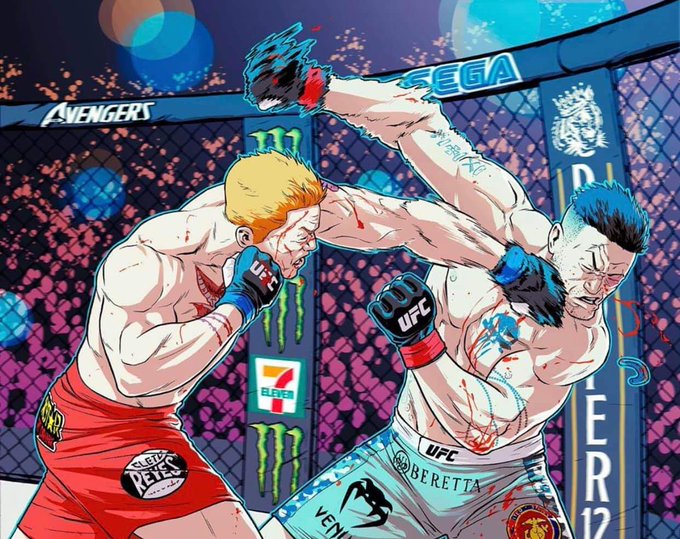 Matt “Daredevil” Murdock beating down Frank “The Punisher” Castle. These two have been at each other ever since they first met back in ’82 (Daredevil #183-184). It’s fitting that their rivalry and clash of ideologies play out here in Rodrigo Lopez’s Marvel UFC Series. That being said, yes Matt Murdock takes to Frank Castle. He punishes the punisher each and every time. I ain’t holding back my bias. I done told y’all that. Remember, don’t get mad at me for these results, these outcomes were based on folks votes on the match-up polls.

Not goin’ lie… this one hurt 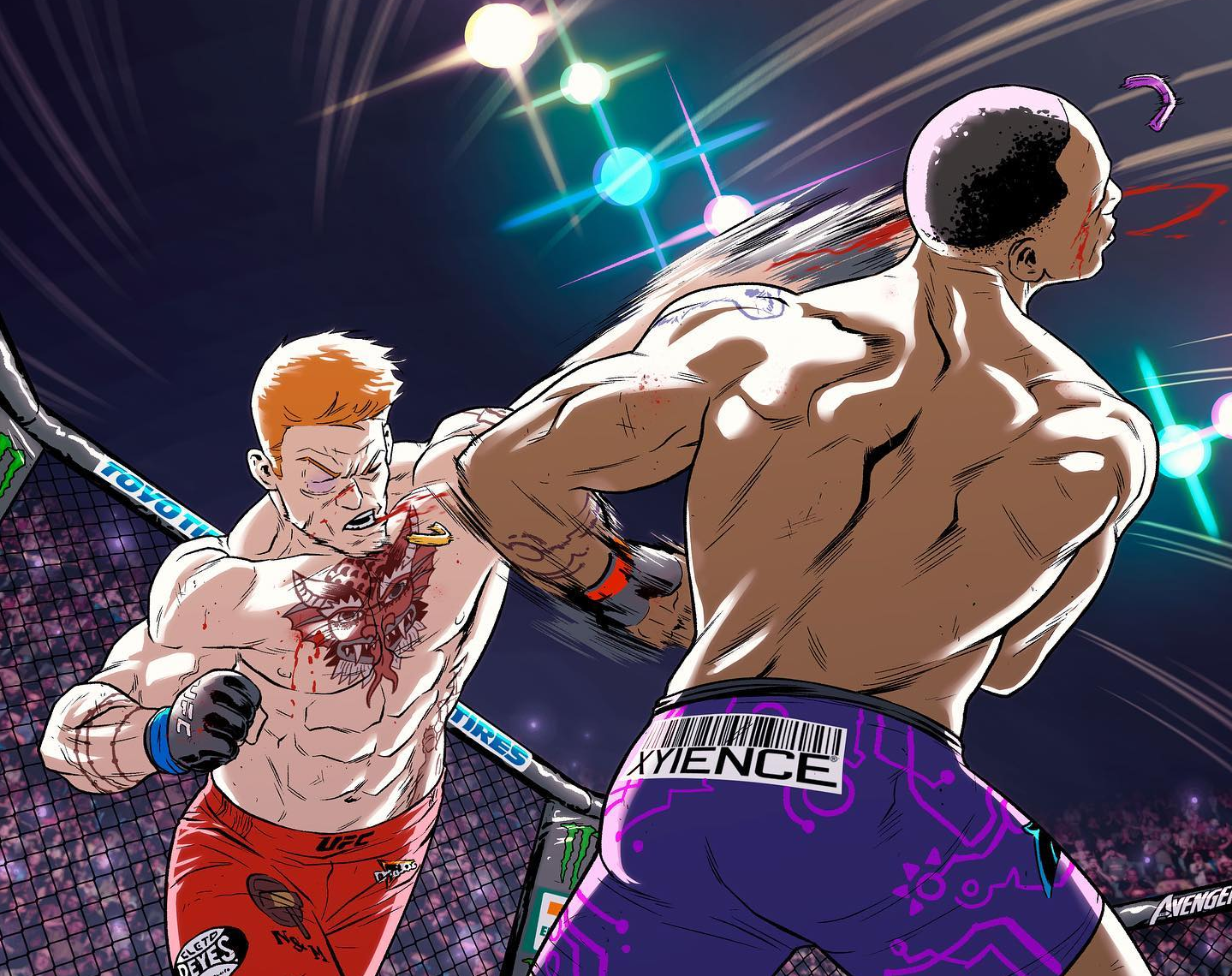 Ugh! You hate to see your faves going at it but damn it, that’s why we’re here. Daredevil and Black Panther are so similar in fighting style. So much so that T’Challa did Matt a favor once and impersonated him as Daredevil. These are two of the most athletic dudes in Marvel facing off. In this match right chea tho? Matt Murdock apparently can’t be seen. At Least, T’Challa got a shot in as he took a shot. They’re that even in skill. These are two of the top fighting technicians in their fields. This is Bret Hart vs Daniel Bryan. 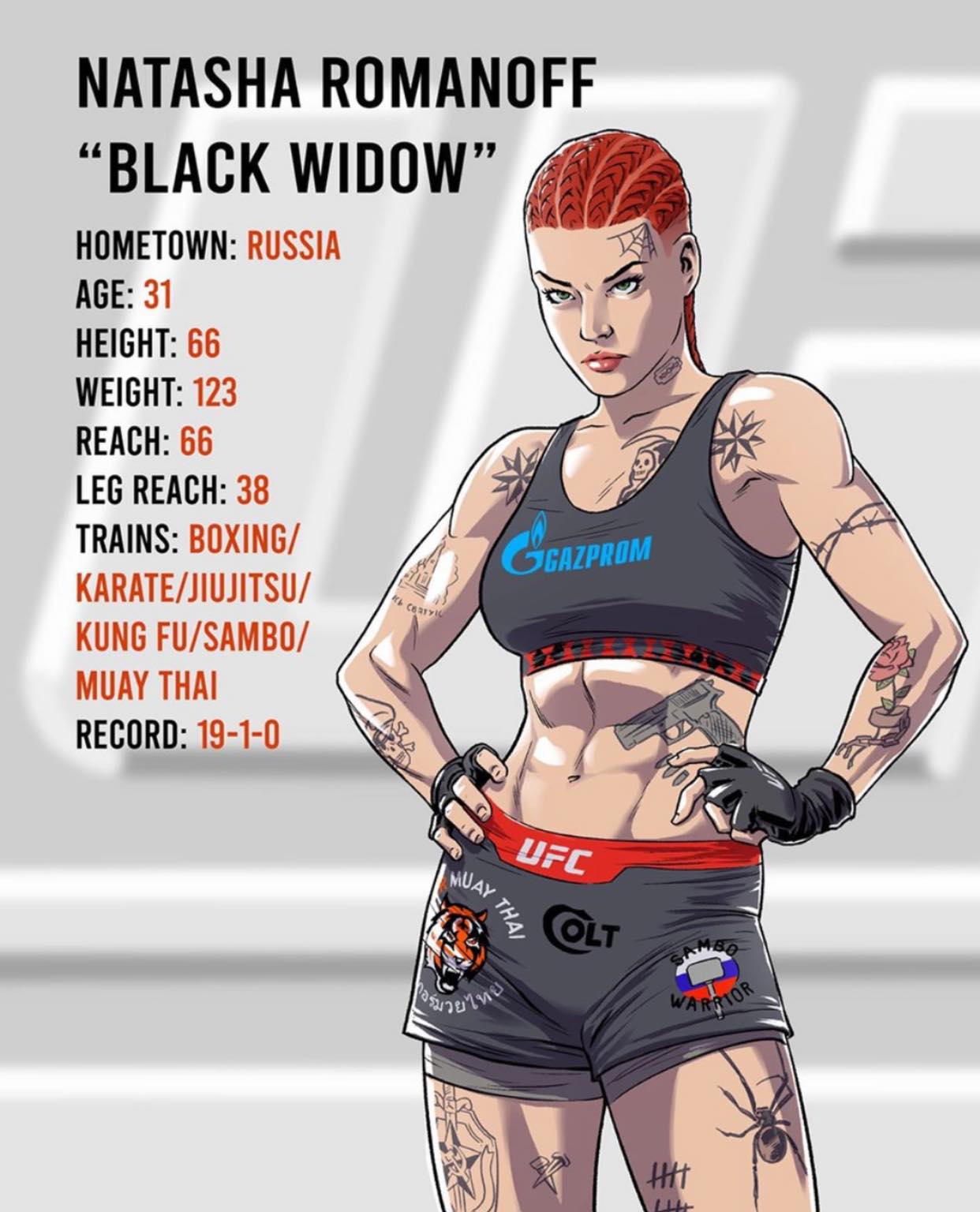 Black Widow has got to be in your top 5 lists for martial artists. Period. Natasha is the definition of espionage and killing. Black Widow got her own section at morgues across the work from the work she puts in. Look at the tat’s that’ll tell you all you need to know. Gun on the abs cause she eats bullets, comrade. The MVP of the KGB, what are we even fucking talking about right now? If you need any more information, look at the styles she knows. Come on man, you not fucking with Nasty Nat. Hair cornrowed back for a reason. That reason being cause somebody going be getting a well-balanced diet of the floor and smelling salts. Folks step to Black Widow in the cage and the last thing they heard is dasvidaniya before everything went the fuck Black and they woke up in ICU.

But did you die thoooo? 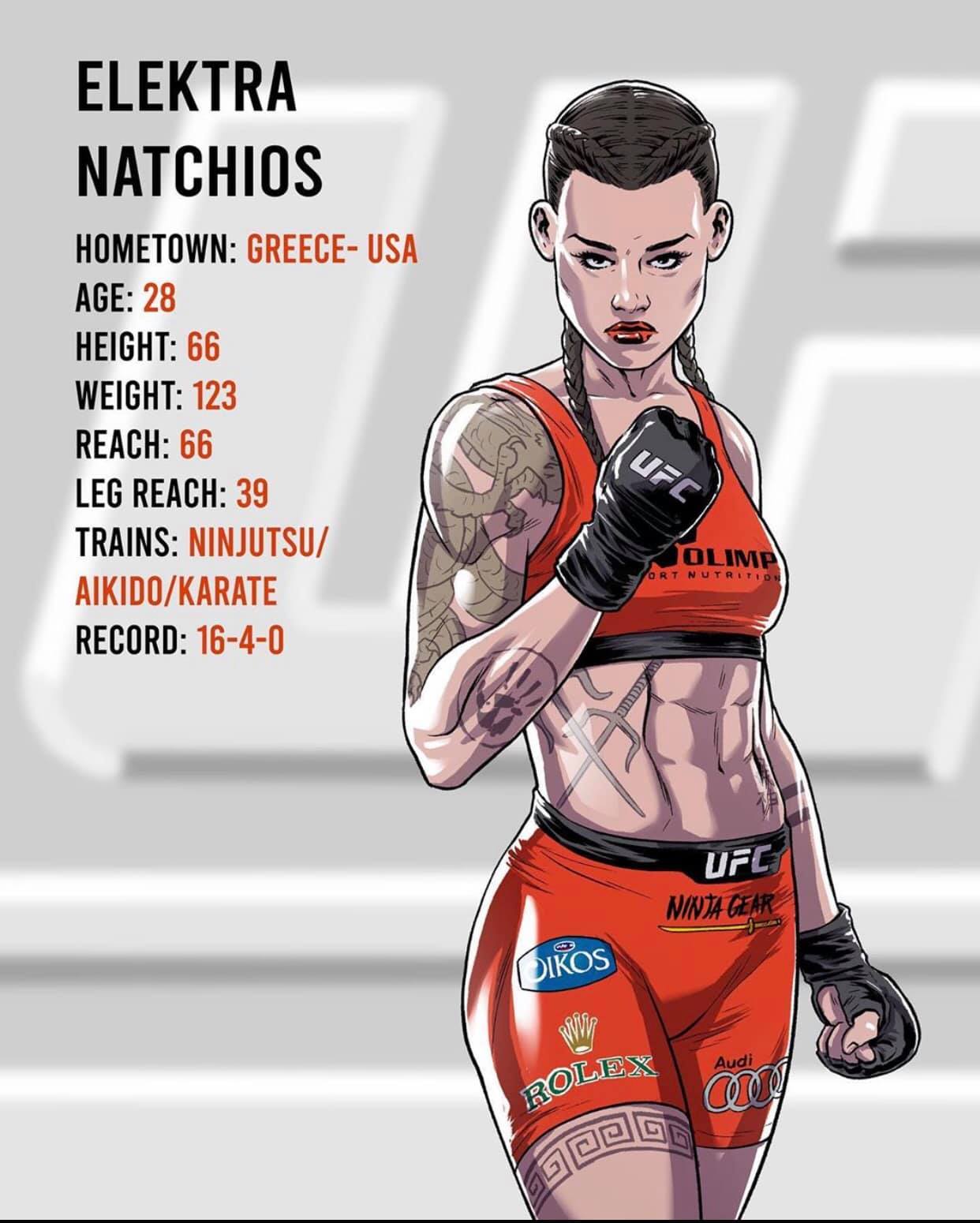 They got the whole squad of killas in this women’s division. Don’t say the name killa without spelling it Elektra Natchios. You already know what she brought. The woman done died and came back. How you die and heaven and hell tell you, “yeah there was a mistake on the books. You’re free to go. Please go.” You see them sais tat’d on the side. You see that hand tat. You already know how the fuck Elektra goin’ give it up. Fists to the temple. Submissions. Torn ligaments. Broken bones. You know the repertoire. You’ll never find an iller killer, what it fucking do? When mercenaries wanna scare other mercenaries they tell Elektra Natchios stories, what up? These mutha fuckas don’t want the trouble with Elektra man, fuck out of here. 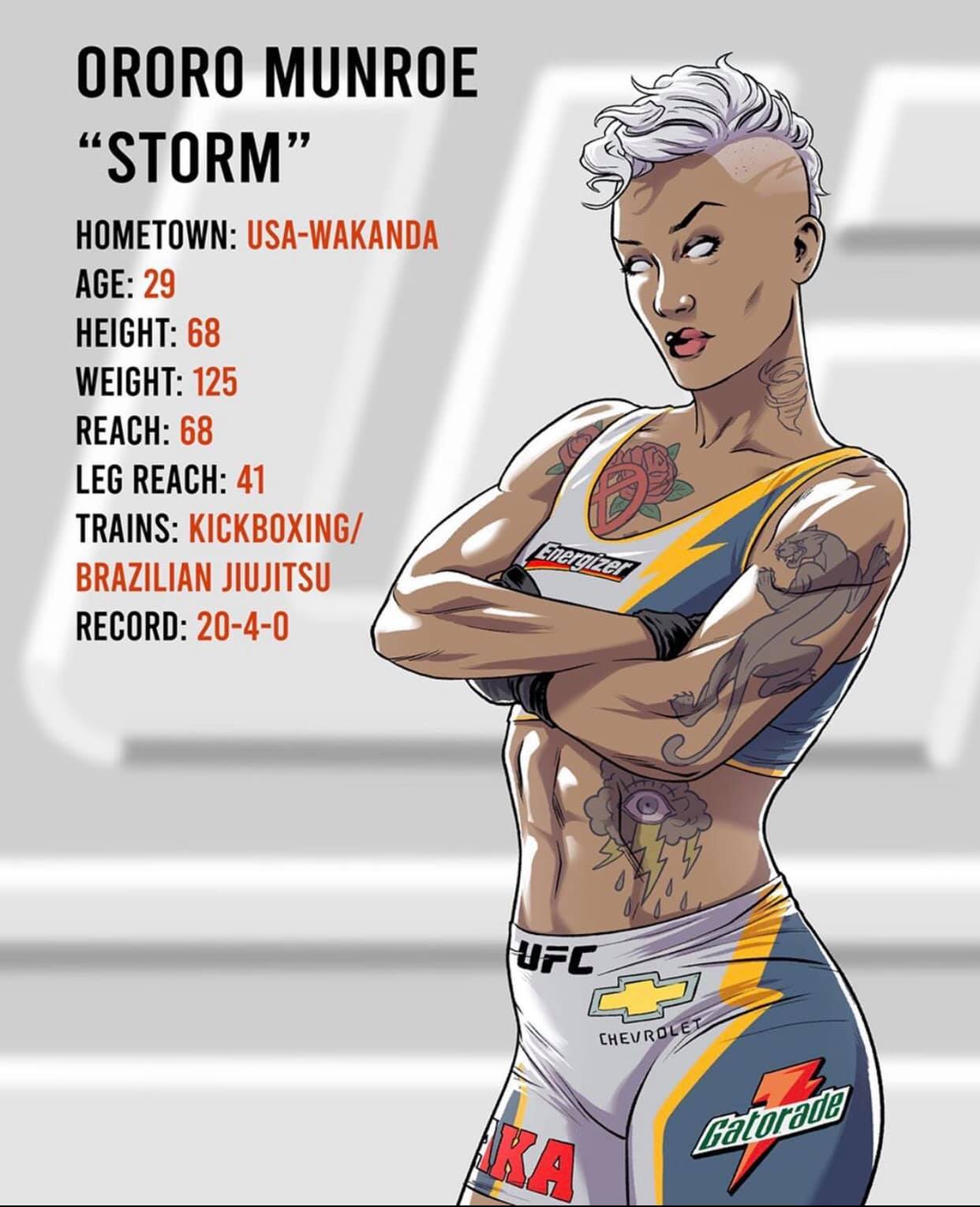 You may be surprised to see Ororo Munroe storming in this Marvel UFC Series but if you know, you know, that Storm got hands. She’s ungodly powerful but Storm can throw down. She’s taken on Black Panther straight up hand to hand. I mean, she’s more versed in cutting and stabbing people but Storm will let them thangs go when need be. Peep the Gatorade sponsorship and AKA sorority on the trunks! Let’s go. Notice that this is punk rock, I’m sorry, Afro-punk rock haircut Storm steppin’ in the ring too. When Storm dons this cut, somebody bout to get fucked up beyond belief. It’s game over. Know that. Storm is a sleeper man, as in she’ll get you in that sleeper hold if ya sleep on her, folks. 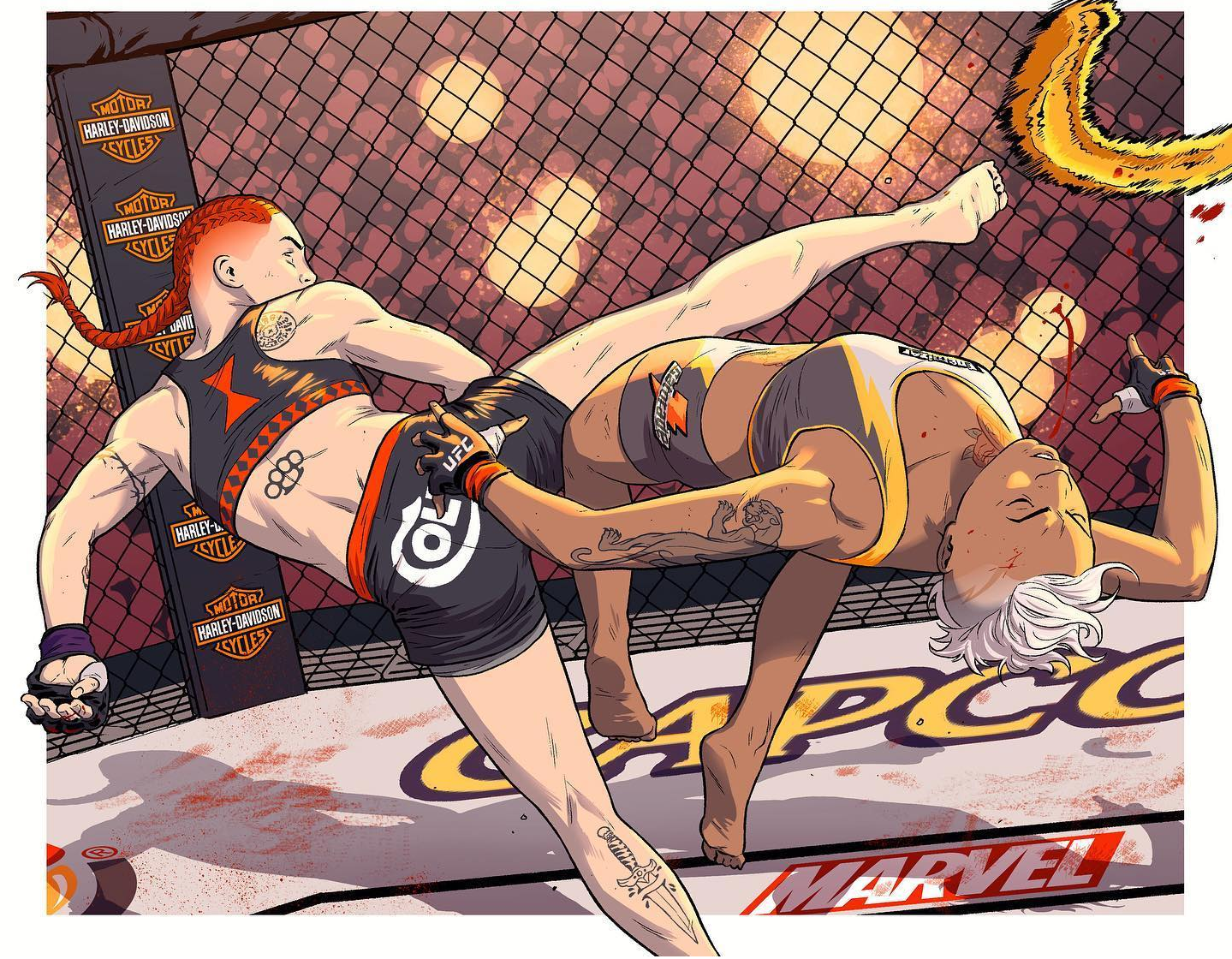 Ooooof, my word. My Yeezus! Listen, of all the was to go out, a heel kick from Black Widow may isn’t the worst. That’s the warrior’s way out. The Mandalorian Way. Yes, “this is the way.” But daaayum, Storm lost the mouth guard on that shit? You hate to see your faves going through it but Black Widow ain’t goin’ go easy on anybody. Them cornrows come out, somebody’s got to go. With the Capcom Sponsor in the shot too? Storm was always a top pick in each Marvel Vs Capcom iteration. Black Widow wants in on that shit now. Gaw Damns. The forecast predicted a flood but didn’t know it’d be Storm’s own blood. Storm goin’ wake u feeling like she let Krakoa down.

Baddest Bih in the galaxy 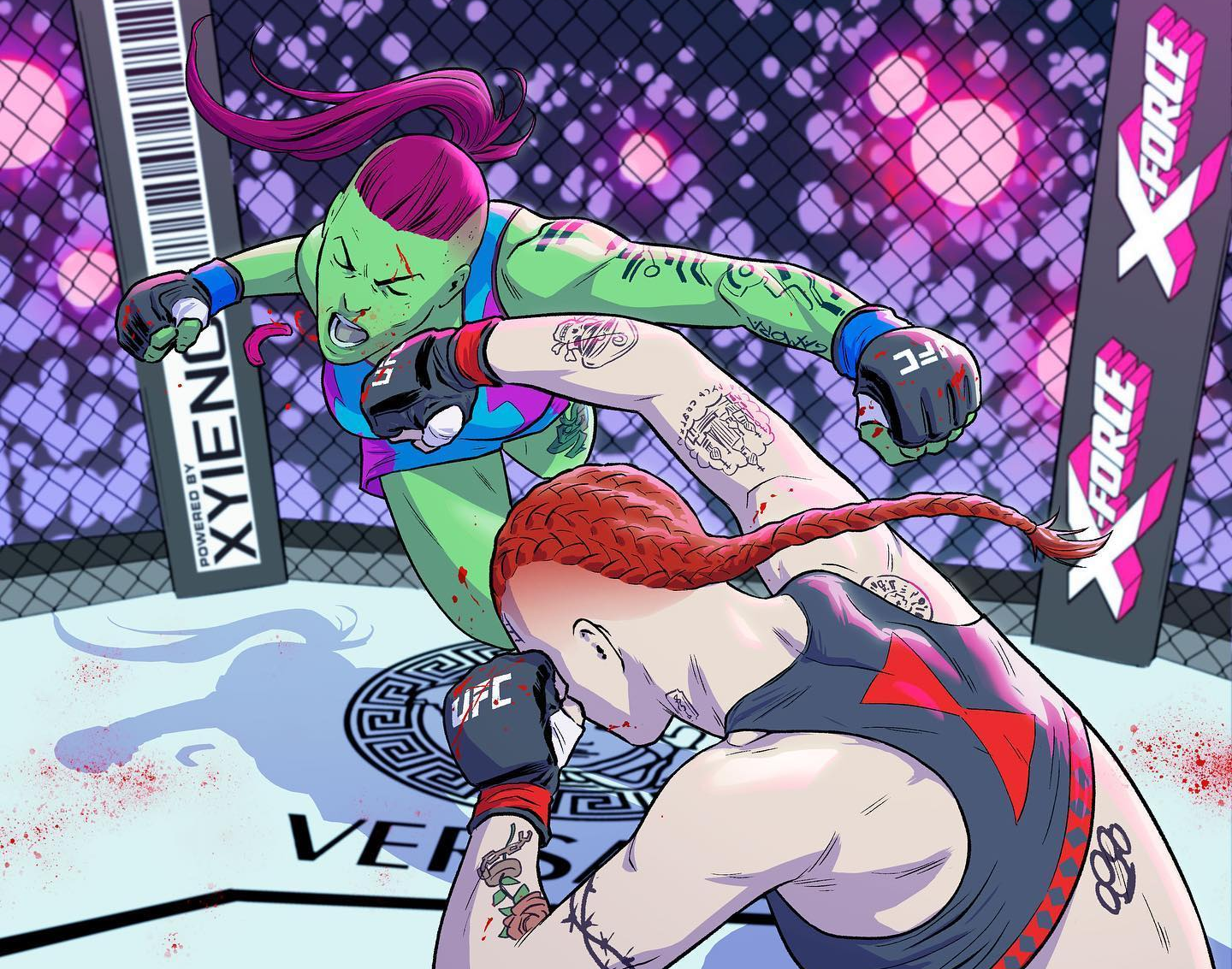 Even Gamora ain’t safe from the pain maker Natasha “Black Widow” Romanova. Look at the hook! Gamora got an iron chin but the MVP of the KGB lettin’ that Howitzer sing one time on her head top. Natasha puttin’ that big hurt on anyone in a skirt, pants, capris, daisy dukes, whatever. Black Widow not only wants the smoke she runs up into the smoke and fights the flames. Gamora is the adopted daughter of “Thanos” and made to be a killer all her life. All her life she had to catch a body…. but apparently Black Widow ain’t get the memo, read the memo, or even care about the memo and rocked her whole universe. Don’t argue with me if you don’t like this outcome. Get on Rodrigo’s Instagram and place your votes for these match-ups if you don’t like what I’m reporting. 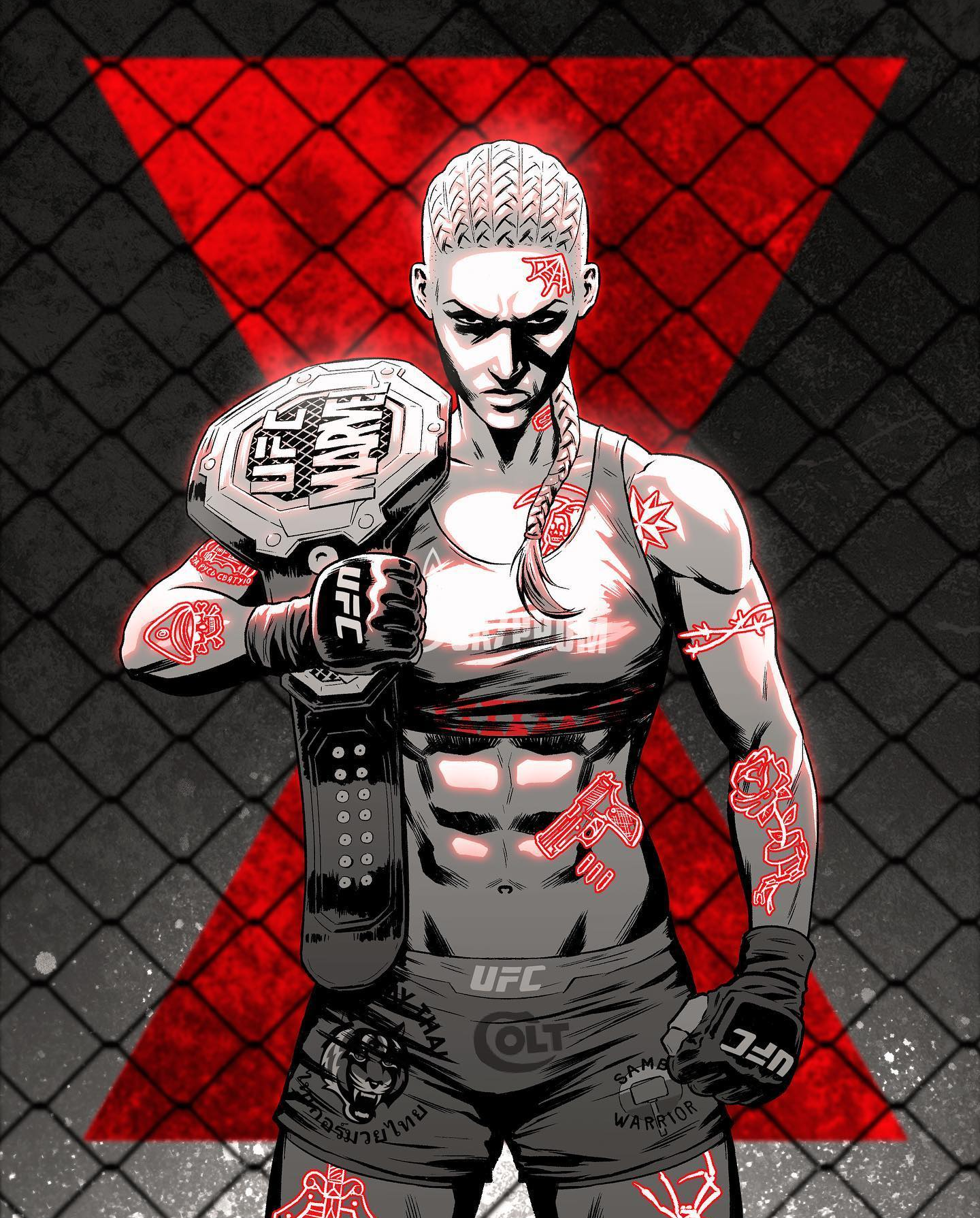 Invested? Yeah you are. Rodrigo Lopez has set up the hero fights we’ve been wanting to see for a minute. The art work is super spectacular and truly gritty as hell. It’s fandom done correctly with beautiful visuals. Check out Rodrigo’s Twitter and Instagram pages to keep up with the latest match-ups. He’s taking it to the heavyweight division and wait till you see who the first contender is. Woof. That’s going to be a fight you’ll wanna see go down.