Look, we all know the drill; you don’t watch RWBY, you earn RWBY. You sit your ass through two seasons filled with 90% teenage drama and the occasional tantalizingly well-choreographed fight scene until you arrive at season 3 aka The Mountain Top, where you may finally ascend into the glory and the Dust and the Vytal Festival forever, Amen. Then season 4 splits up literally the crux of the entire show but you don’t waver, you persevere, you grit your teeth through Weiss’ tantrums and Yang’s moping and Blake doing pretty much nothing except for one dragon battle and Ren and Qrow being the only redeemable part of Team JNNR’s combined obnoxiousness… because season 5 was gonna be worth it. You told yourself that.

Let’s start by addressing the first problem with Chapter 1 of Volume 5: tone. Up to this point every single season has started out by showing us something brand new and therefore setting the tone for the rest of the volume to follow; Volume 1 opened up with the storybook narration of the backstory, Volume 2 introduced us to a brand new enemy, Volume 3 began with the touching conversation between Ruby and her mother emphasizing the seriousness of Huntsman life, and Volume 4 brought us that bad ass Grimm animation and the expansion of our resident league of evil that put even Cinder to shame. Volume 5? We get the set of Kung Fu Panda 3. 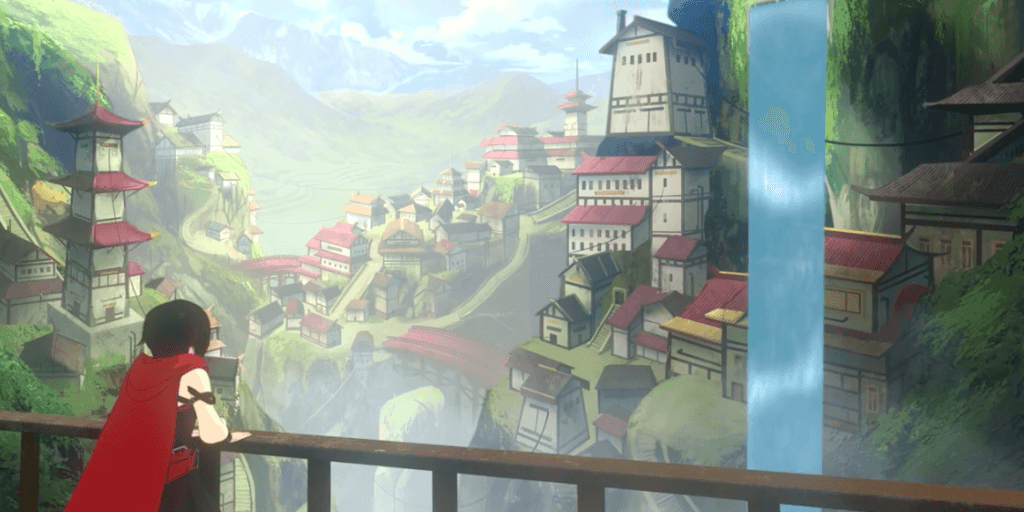 Dawg, I dare you to tell me that doesn’t look like the panda village.

So the place we spent an entire season building up to? Yeah, nothing particularly new’s revealed. The City of Mistral looks exactly like Menagerie with less bunny ears and more mountains. Neat. This brings me to my second problem with this episode: scale. Again, every season up until now has tried to outdo the ones before it in expanding our understanding of the world, from laying the groundwork to understanding its threats to interacting with strangers from other countries to finally traveling to those lands. What we had here was a solid opportunity to expand on the idea of societies where magical child soldiers are normalized and the approach to their training/home life in another culture, but what we got was a cheap jump scare. Shame on you, CRWBY.

My third problem, and possibly my biggest is this: Team JNNR is still a thing. No more. Please. I beg you. Ren tends to be too quiet to play the straight man and half the time Qrow is drunk off his ass or brooding, so we’ve just continued the trend of Volume 4 to place the three shrillest characters together and hope they don’t break anything with their childlike tendencies. At this point, I’m begging for team RWBY to reunite not because of logical or sentimental reasons, but because it will guarantee less screen time with Nora. Sorry not sorry, supporting characters gotta support.

The saving grace of this episode is easily Yang’s scene, and I don’t think it’s any coincidence that her fantastic character short was also saved for the 5th season debut. I think it’s safe to say that now that we’ve seemed to have completed the Arm Arc and are moving on to “Mommy Issues” Yang is going to continue to be one of the most interesting parts of this series moving forward. The tension between Ilia and Blake is pretty great, too, especially since Blake otherwise continues to waste away to the point of being replaceable by one of her shadow clones.

I’m not saying we as fans should jump ship quite yet; after all, we’re under no threat of any more awkward love triangles or strange school dances (for now), and there’re a few little hints at future conflicts that may pay off. Between last season and now the animated shorts of RWBY Chibi have also proven that writers and voice actors alike have kept a pulse on what makes their characters great, so I feel like at the very least the interactions and dialogue will pick up. I’m just not 100% certain of the direction the story is taking. At this point, I say the best course of action is to take the lead from Qrow and make sure you have a sample of your favorite something on you when viewing, just in case.