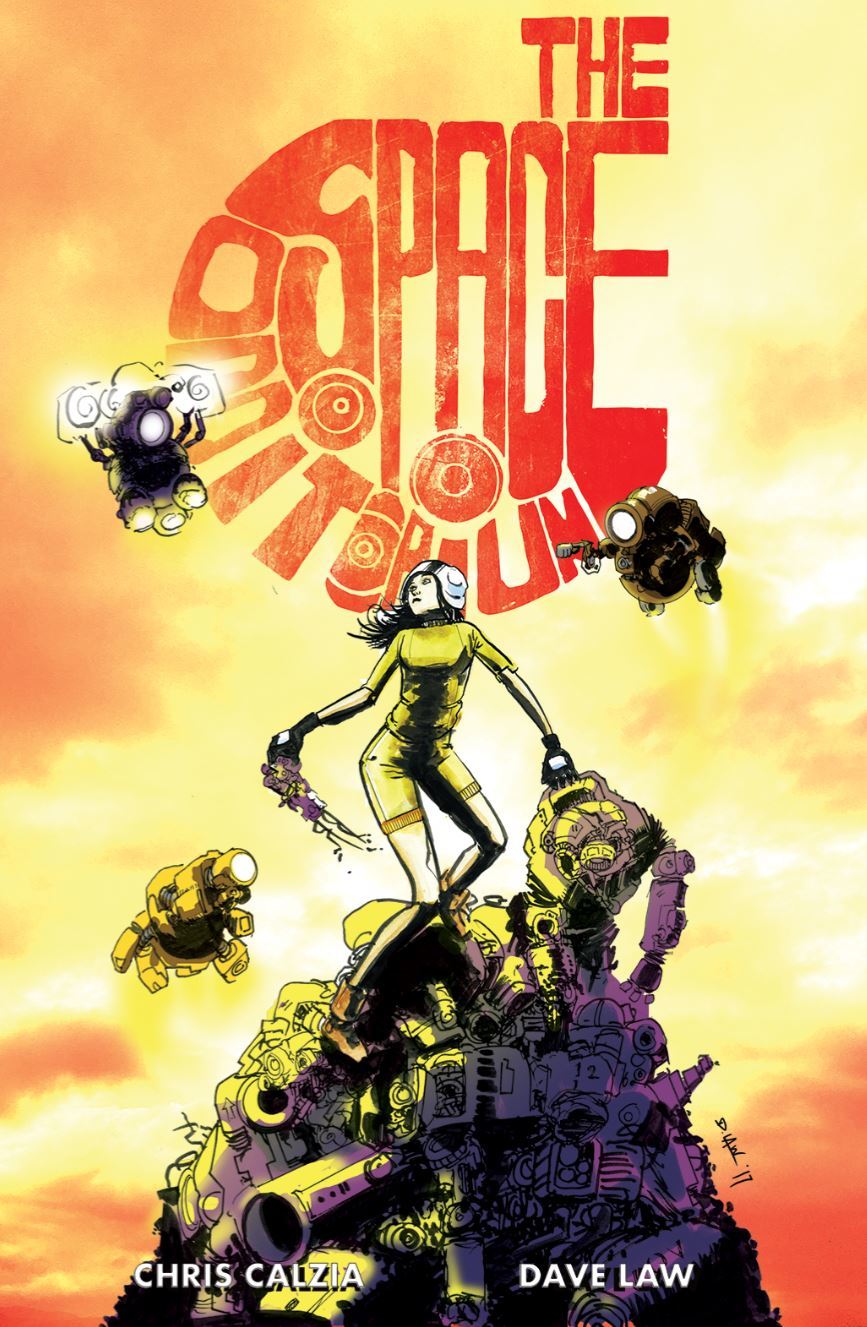 Have you ever wondered what would happen if the world ended, and aliens came down and found remnants of the Earth we once knew and loved? They’d most likely find that we were a pretty sophisticated society that accomplished feats in engineering, mathematics, and agriculture, right?

Orrrrrrrr maybe they’d just find old recordings of television and base their entire perception of the human race off of that show alone.

This is exactly what happens in The Space Odditorium. You got it, dude!

The story follows Major Trauma, the last survivor of Earth who is forced to compete in this intergalactic game show. When she’s not competing? She’s watching reruns of Full House or as the comic calls it: “Pretty Vacant”, a skewed version of the popular 90’s American sitcom. Through this, she also learns a twisted, skewed version of what it means to be a part of a family.

This shit is Bonkers Mcgee, fam. On the surface, the themes and ideas that the story allude to are pretty grim, but Calzia and Law have so much fun with it that it doesn’t feel that way. They could easily double down on some of the more depressing aspects. But instead, they approach the whole thing with an anti-establishment, carefree philosophy.

The story has a real nostalgic feel to it. Aside from the Full House references, the aliens also talk in an alliterative way that’s reminiscent of Gameshow hosts of the Sixties and Seventies.

So far in Volume 1, there isn’t much structure to the story. Each issue, called a “Record”, is more like a day in the zany captive life of Major Trauma. Toward the end of the volume, things start to take shape as we meet more characters and questions are presented that broaden the scope of the story.

Aside from that, the art and layout of this book are both really unique. You can tell a lot of thought went into its production. A lot of the visuals are influenced by Pop Art, which alludes to the idea of mass production and oversaturation. This inspiration also speaks to how we put too much importance into things that ultimately have little meaning. Law also has really intricate designs for the more mechanical things that pop up and trust me, there are plenty. They’re nice to look at. The colors jump off of the page. They’re so strong that they really convey the mood of what’s going on. Lots of saturated reds, yellows, and greens. 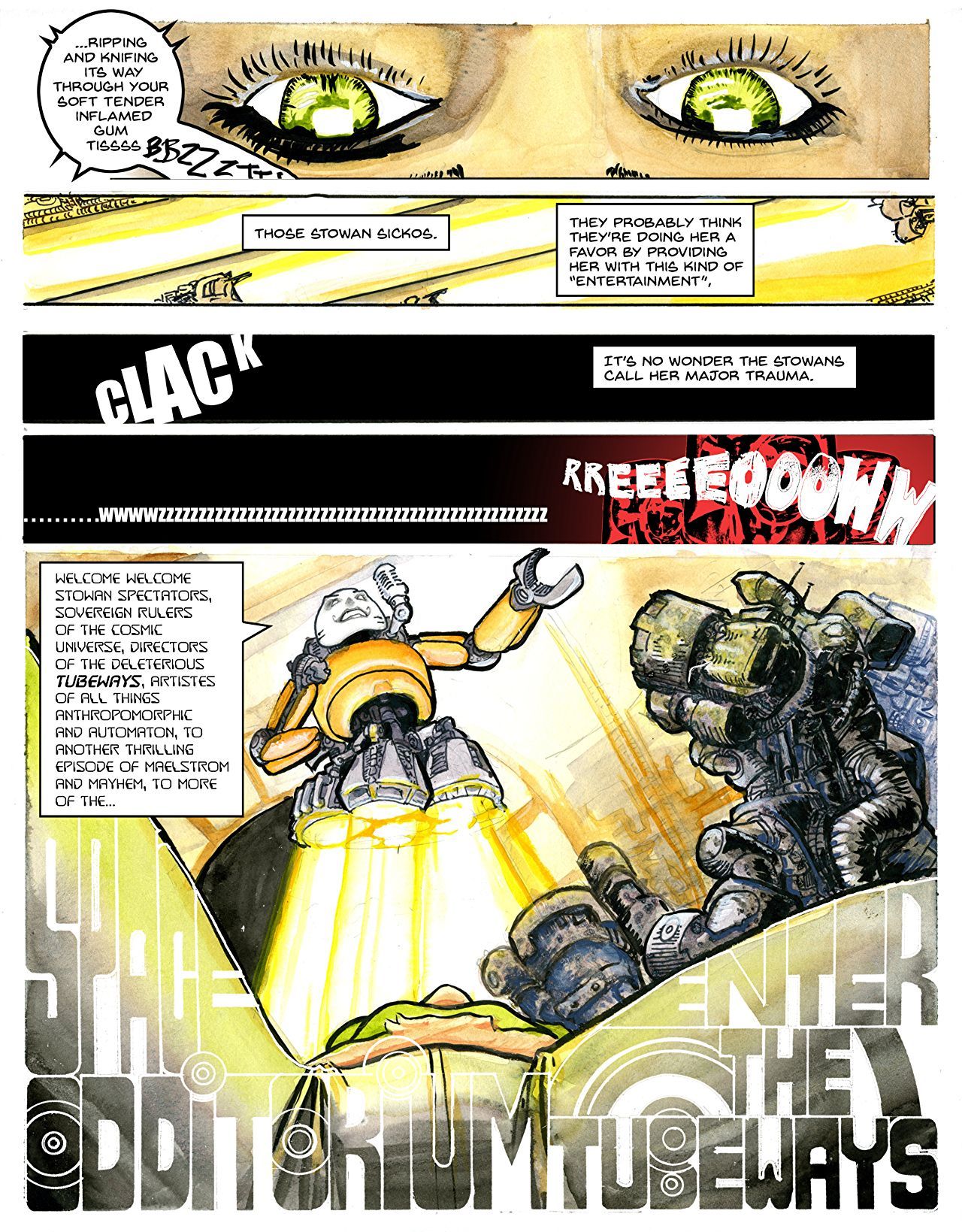 If you read any of my reviews, you know I like finding music that thematically fits the comics I read. In my interview with Calzia and Law, they bring up a lot of Punk Rock and Synth music that both inspires and fits well with the aesthetic of the story. But as I was rereading the volume, I listened to the score from Requiem for a Dream and I think I might have found the best thing since Avocado Toast.

That was a joke by the way. I’m sorry, but I can’t let you think I eat Avocado Toast.

But for real, the score, for me, is a seamless fit. A good portion of it plays on different forms of the movie’s theme “Lux Aeterna”, which has a very expansive and classical sound that works well with a story set in space. But other aspects of the score are unhinged and off-kilter and it fits almost seamlessly with some of the crazy shit that goes on in this book.

The Space Odditorium delivers wonky and weird space action in its first volume. As things begin to really take shape, it promises fun and engaging stories to follow.

Chris and Dave are independent, which means they aren’t making this book for a big publisher. Their spirit and drive are an example of what really drives the heart of the comics community. If you appreciate that kind of work, and this story sounds like something you’d dig, check them out on Comixology. Pick up an issue or two. Support is the most important thing for indie creators.