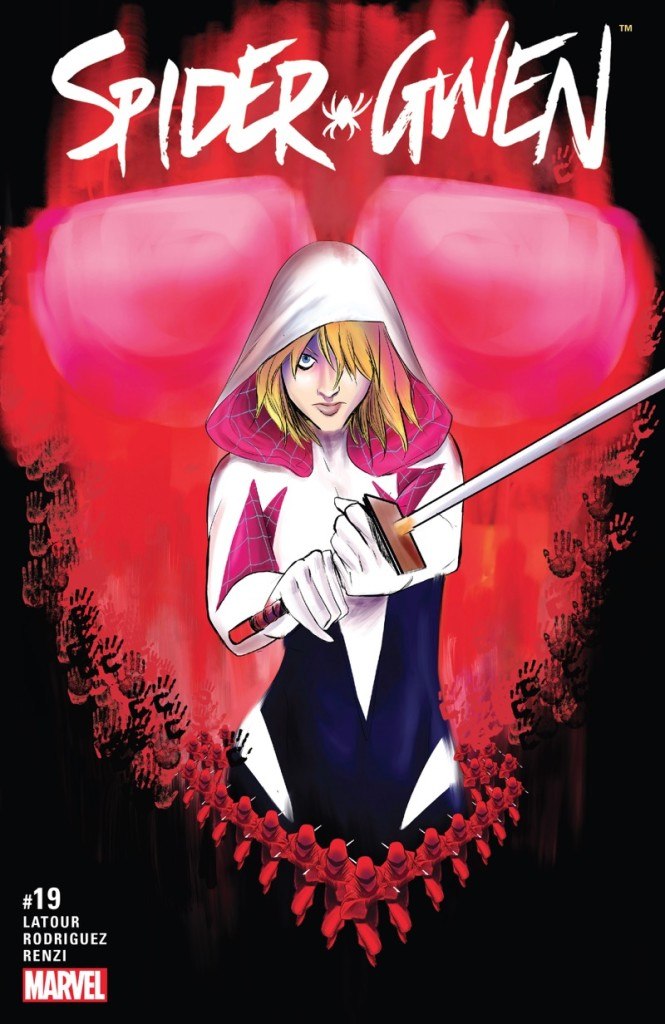 The Miles Morales crossover behind us, Spider-Gwen is back to solo adventures with “Predators” part 1 and picking up on the Daredevil blackmail plot that had fallen by the wayside. Between Gwen, her father, Matt Murdock, and Harry Osborn, there are a lot of pieces at play – pieces that weave together with a lot of backstory pointing all the way back to Spider-Women and the effects of Cindy Moon. It was worth sticking through the rough patches and Marvel’s need for exhaustive crossovers, as Spider-Gwen #19 brings the story back on track to the parts that interest readers most: Gwen’s loss of powers, her friends’ knowledge of her identity, and the major conflict of Spider-Gwen’s deal with the Daredevil that will define her status as hero, both in potentially regaining her powers but also in how she eventually must stand up to him.

That’s a lot of ground to cover in a single issue, and the pitfall here would be trying to do too much in too little time making for a convoluted, busy read, yet Spider-Gwen #19 webs them together well with Gwen Stacy – both masked and unmasked – interacting with various combinations of the wide range characters around her. There’s Harry Osborn, who is struggling in half-lizard form and seeking Gwen to find help; an imprisoned Captain Stacy who sits in a jail’s meeting room with Gwen and Matt Murdock, still seeking to clear Spider-Gwen’s name; a feared Matt Murdock who wants to leverage their desperate positions to his benefit; and even in all of that there’s a funny scene with the Mary Janes as they weigh the evidence that their crazy theory of their friend being a superhero might be right. It’s a lot, but doesn’t feel like it.

Of the many scenes done well, and the silly, Gwen-esque puns like plays on the word “nuts,” one scene seems less than thoughtful, at best, and altogether distasteful at worst. A white police officer has a chance to catch Spider-Gwen and instead of pulling his gun on her, he tries to talk her down. After Gwen gets away, a Black officer is written to give him a piece of advice: “next time you corner a dangerous animal… you shoot first.” The advice itself, from the black cop to the white one, is juxtaposed against a panel of Gwen Stacy pulling up her hoodie as she discreetly passes by, at which point you may have vomited already during this paragraph.

Is it impossible for a real-life black officer pass that sentiment to a white one? No. Does it seem blundering and tone deaf to write a black officer refer to a blonde, white woman as a “dangerous animal” who lives to slyly walk by unharmed? My beloved, in the state of America today, please be more thoughtful of your position as a writer penning the scene.

Overall though, Gwen is back on her grind and you can look forward to this arc returning us to the type of conflict we love to see in her. Growth, authority, and identity. Happy to stick around.