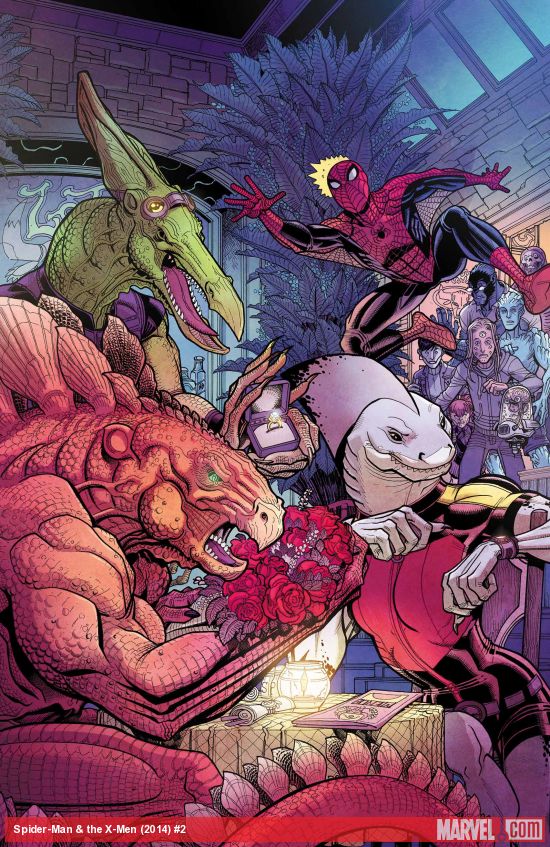 Elliott Kalan goes so far in the genius. This book is fun man, this issue has its moments where it can come across campy or predictable but its sooooo fuckinnnnn funnny man. Kalan is killing it with the wit of Spider-Man in this book dude. He has this characters down pact and keeps the humor rolling with all the students in his class as well. The sarcasm is on terror alert orange and I love it. We see Spider-Man out of his element but adapting and getting the kids to do so as well. 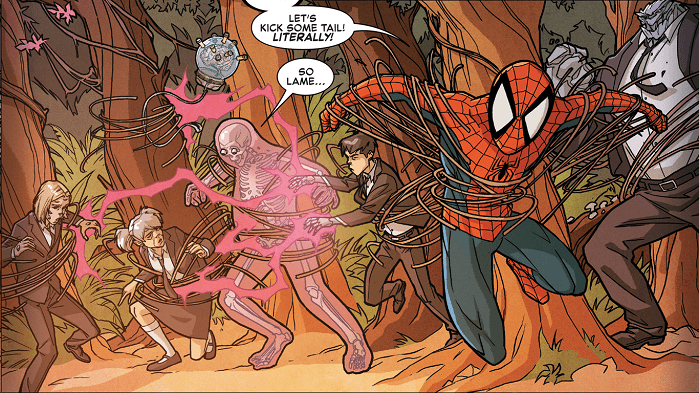 It’s a really topsy turfy (yeah I said it. That was my word choice. fight me.) issue that has Spiderman having to give up to Sauron & Stegron, then thinking he has the mole figured out since shark girl turned on the team, finding out that was just her way of saving their hides, then having to escape and come back. There was so much hilarious ridiculous happening. We see Shark Girl getting her flirt on to pit Stegron and Sauron against one another. Everything was just so outlandishly hilarious man, it goes “really?- chuckling to yourself” real quick. The best part is when Peter finds out that Staten Islanders were being turned into dinosaurs and he was just letting the jokes fly free of giving any fucks.

Failla’s art is wonderful, you get the fell that you’re watching a cartoon within the panels but the drawings look badasss when it comes to each individual character. Even though we got all this wackiness happening all over the place, the characters look so good that it makes the outlandish situations seem pretty normal.

I got nothing but good words so far. It’s fun seeing Parker in a teaching roll and pissing off storm, especially with the little notes he leaves for her in the beginning of the book. I get Kalan’s humor and it works in this title and these characters. I’m already ready for issue 3 to drop.