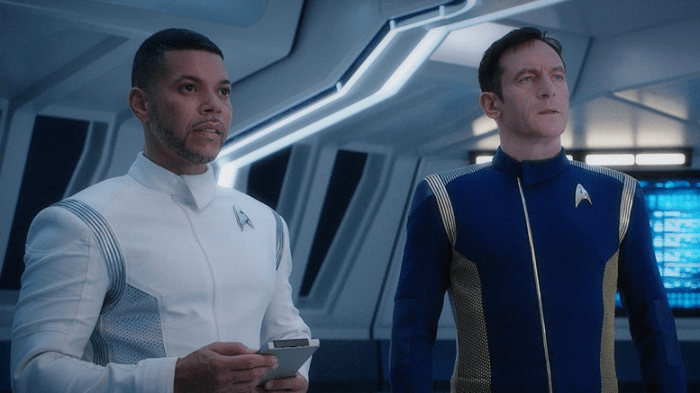 ***Spoilers, All the Spoilers Ahead**

Whew. That’s how you come back from a midseason break: confirming recent fan theories, setting up new fan theories, doubling down on both time-travel and alternative universes…oh, and death and sex.

Remember How We Got Here

Refresher: One last jump. That’s what Captain Lorca guilted Lt. Stamets into at the end of the last episode, “Into the Forest I Go.” Don’t pretend like that wasn’t manipulation, because it was. And that manipulation has got the whole crew lost somewhere — the forest I suppose — with no one they can trust but themselves. Nothing is where it is supposed to be. The metal is weird. They’re being fired on by Vulcan ships. The “quantum signatures” are wrong. (Quantum signatures being Star Trek talk for “sciencey science”.) 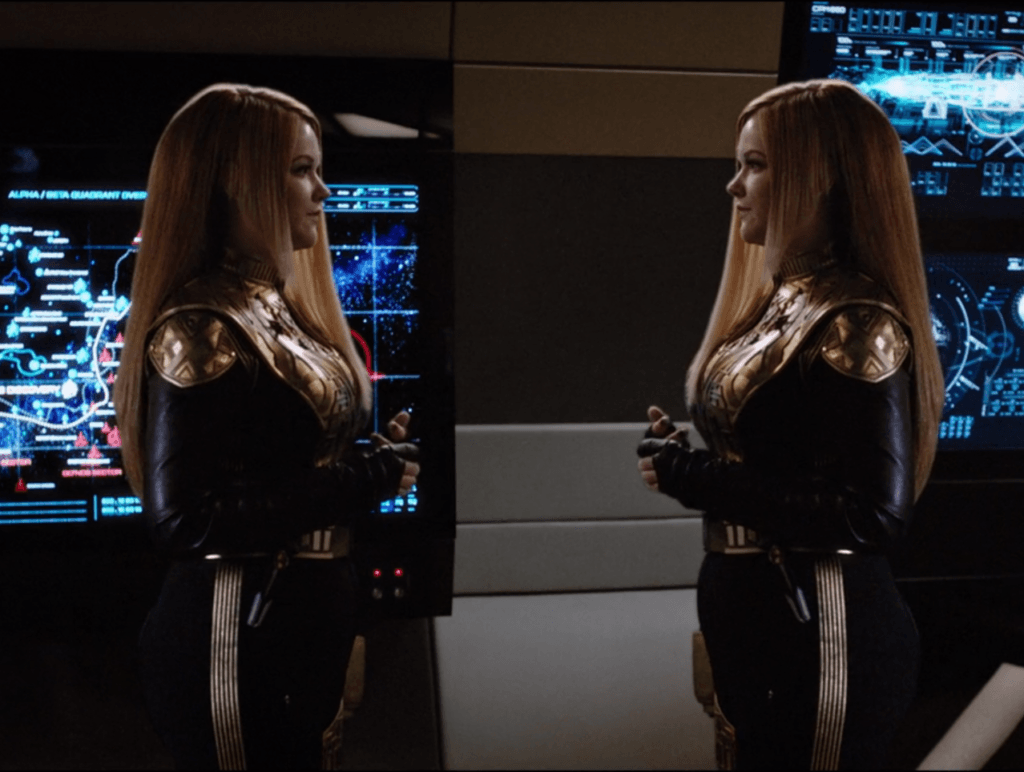 At the end of Episode Nine, Stamets’ eyes went all white and the muttering took over. Now he’s laying catatonic in a hospital bed with his husband/doctor, Hugh Culber, at his side. Things get a little dicey, it appears that catatonic Stamets can still throw a good left punch, but Culber is keeping it together. Well, except that he has become the First Officer of the “Lorca is not fit to be Captain” club (of which we should all be members). He knows for sure that Lorca did his husband dirty and pushed him too far. He makes that accusation, right on the spot. Even with that, he admits that he doesn’t have the emotional distance required to be his hubby’s doctor, so he steps aside when ordered. 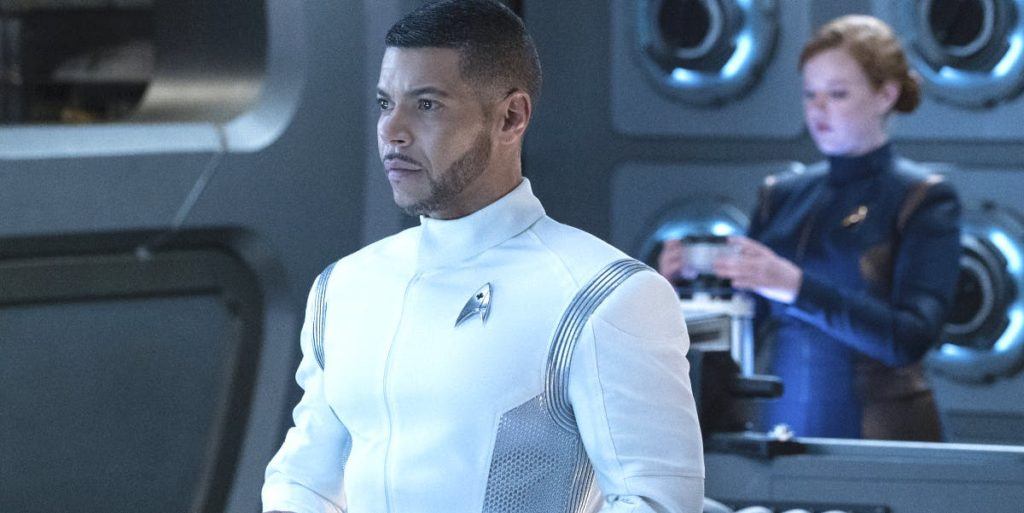 Ash Tyler is still having issues. Icky, yelly, bloody, flashback issues. I don’t care for not one bit of it — it is overused as a shock tactic when just his reaction would be sufficient to tell me something’s wrong. That aside, Tyler continues to fulfill his duty as the local manly man who does risky things that Burnham has to save him from. After retrieving a data core with information about the universe, Tyler heads down to the brig to talk to L’Rell.

L’Rell (played by Mary Chieffo) does a fantastic job of playing simultaneously a sadistic torturer and a concerned lover. I can’t imagine how hard it is to play sexy and hurt with a Klingon head-thing on, but she manages it. Her portrayal makes the whole situation obvious. With just a few lines, she provides the context for Tyler’s flashbacks, all of the actions he’s taken on the ship, and what he does going forward. The fact that it means that our girl Burnham will never be happy aside, L’Rell puts the finishing touches on the Tyler as Voq theory (which I now consider fact) and rules the few minutes of screen time that she has.

But the brainwashing has gone wrong, his memories aren’t coming back like they’re supposed to. Or Tyler, unlike Voq, isn’t cool with just letting L’Rell talk him into anything. 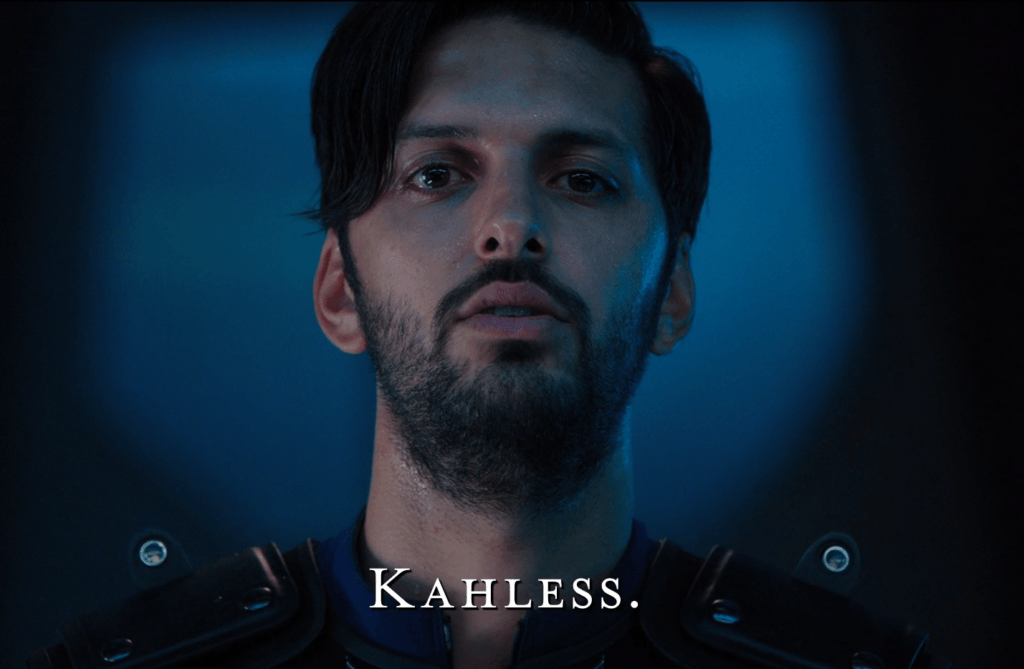 Tyler and Burnham have an honest talk, in which Tyler convinces Burnham to not tell the captain about the flashbacks. I’ll be Got-Damned if every male officer on this ship isn’t a mental time bomb waiting to explode, leaving it to the female officers to save the day.

It Is a Whole New Universe Gang

The Mirror Universe has been a staple of Star Trek since the beginning. We knew sooner or later Disco was gonna go there. But now, in the darker timeline that this Trek has set up, we’re gonna get the mirror universe all the other shows were too happy and upbeat to show us.

Terrans (that’s us) are the oppressive, xenophobic class that rules the galaxy, with the Klingons, Vulcans, and other races allied against us as rebels. In a mad scramble through the captured data cores from an enemy ship, Saru and Burnham together determine the following:

Believe me, they’re all as shocked as you are.

A passing ship hails the Discovery, requiring Tilly to put in an appropriately awkward turn as the captain. Unable to seal the conversation on “mechanical malfunction” Tilly passes the com over to her chief engineer…whom Lorca impersonates with a vaguely passable Scottish accent. As we all know, all chief engineers are Scottish until proven otherwise. It is a welcome in-joke in the midst of a tense set-up.

Cue montage sequence of the primary crew on the ship getting new uniforms, new badges, and studying up on the history of this new universe. A universe where Cadet Tilly gets her wildest wish: to be captain of the Discovery. But this time, instead of our awkward, funny Tilly, she’s got to play Captain Killy, the Slayer of Sorna Prime. Watching her transform, while even more strongly embracing her gentle personality, is engaging and indicates that Tilly may be the only crew member who doesn’t have to lose her self to get out of this mess.

How Do We Get Out of Here?

Turns out that Burnham is the captain of the I.S.S. Shenzhou in this universe, or was before she attempted to kill Lorca, who had turned traitor to the emperor. Burnham is presumed dead and Lorca on the run for his crimes. What’s the play? The play is the U.S.S. Defiant.

[Deep Nerd Time]
Don’t be confused by the name U.S.S. Defiant. I initially thought they were referring to Sisko’s U.S.S. Defiant from DS9, the one that killerated er’rybody during the Dominion War. But no, they’re talking about the U.S.S Defiant from Enterprise, which features in episodes “Through a Mirror Darkly, Parts 1 and 2” and then later (earlier for us) in The Original Series episode “The Tholian Web” when the ship is trapped in-between universes in a spatial interphase. The use of the U.S.S. Defiant as a plot device here relies on time travel, universe phasing, and mirror universe shenanigans. This is perhaps the most Star Trek thing to ever Star Trek. [end Deep Nerd Time]

The Discovery crew discovers that the Defiant was there in this universe’s past and determine to find out who/what/how. The answers to those questions are on-board the I.S.S. Shenzhou, so a disguise is required. Now not only are they trapped, now they’re digging deeper, with Burnham returning to her home ship with Lorca as her prize, and Tyler as her bodyguard. Sometimes the only way out is through. Nothing bad can happen here now, can it?

Tyler now has to manage his brain. He can’t go into another high-pressure situation with flashbacks and, perhaps, a whole ‘nother personality running around in his subconscious. Well, he can, but it isn’t a good idea. He does the right thing and goes to The Best Doctor in Space, Dr. Culber, who, as he isn’t caring for Stamets, has time. They talk Manchurian tests and Ingrams and it becomes clear that Culber is not going to let Tyler go on any missions with his brain all scrambled.

Stamets from across the room screams: Stay out of the palace!
Culber runs over: Don’t worry boo, I got you.
Stamets, his eyes clearing and speaking normally in a moment of terrifying clarity: Be careful, the enemy is here.

Captain Killy gets the Shenzhou on the phone and plays her part like she was born to it.

Gifs from DiscoverNow.tumblr.com
Double Got Damn Tilly! Don’t get too carried away now!

Meanwhile, down in Sick Bay, Tyler and Culber are talking. Culber reveals that the Klingons didn’t torture Tyler, they remade him. Moved his muscles. Shortened his bones. Gave him a whole new personality overlay…Culber doesn’t know what’s going on, but he sure as hell isn’t letting this Tyler guy, with his underlying personality laying in wait, back on duty.

Tyler can’t have that. He takes matters into his own hands — by which I mean to say he takes Dr. Hugh Culber’s head in his hands and snaps his neck, dropping his body to the floor like… This is the point where I had to pause the show and get a cup of tea. I was shook. Taken aback. Misplaced and misdirected. The sudden violence of it, especially to one of the only characters that has not exercised any violence himself in the show?

Man. Fuck Ash Tyler. I can’t wait for Burnham to find out and kill him.

Stamets says: The enemy is here.

Poor Stamets. He’s a widower now and he doesn’t even know it.

Fresh from killing Culber, Tyler joins Burnham and Lorca and they transport over to the Shenzhou, where they meet Acting-Captain Connor. Burnham drops Lorca off in the brig, where he’s placed in an agonizer booth, which is probably about what Lorca deserves, at least for a little while.

Connor, no longer captain, escorts Captain Burnham to her ready room. On the lift, he gets talky. His feelings are all hurt b/c the crew doesn’t respect him the way they respected Captain Burnham. He decides to throw hands to prove himself. Captain Burnham shows him, and the crew, why she was in charge in the first place.

Finally, after a long day of pretending to be a blood thirsty fascist, Burnham and Tyler meet up in her private quarters. Tyler is acting twitchy, hoping for a quick resolution to this game. In his attempt to comfort Burnham for having to kill Connor, he gives her one of his creepy oaths — that he’ll protect her, always. Does he mean that as himself? As Voq? Did he say the same thing to L’Rell? Burnham takes him a face value, and they have a final declaration of dedication. Hugging turns to kissing, kissing turns to rolling around in her bed, and we know, once and for all, that Burnham’s heart is gonna be unfixably broken. Like wishing she’d just gone to jail broken. Fuck Ash Tyler. He’s replaced Lorca as my most hated character.

Ash as Voq makes perfect sense, they share all the same core personality tenants: fierce dedication to their superior officer, needing a single female to support and encourage him, a tendency to oaths, a relaxed, monk-like exterior disposition that can quickly explode into rage and violence. It is a great set-up and reveal. We can only hope that the writers’s room for ST:Disco haven’t shot their only shot with this one and that there are other surprises in store.

On the matter of Dr. Culber, I’m broken up about it for a number of reasons. Yes, one of them is because representation matters and seeing Gay Latinx people in space matters. Another reason is what kind of represenation that character has. Culber and Stamets (#Culmets) are the only stable, mature relationship on the entire show. They model adult, developed love, not young honeymoon phase dating. Their relationship is what helps Burnham take the plunge with Tyler in the first place and it arguably is key to multiple story lines. Plus, Hugh and Paul are just adorable together in their tooth-brushing domesticity. To have this role in the show filled by a gay couple is wonderful to watch. So watching the doctor be brutally killed by Tyler was rough and it stands scarily close to the “Bury the Gays” trope which we see in so much media — where queer relationships are never allowed to develop because one of the partners dies horribly. However, I trust both the showrunners and Wilson Cruz, the actor who plays Dr. Culber, to bring this back around. I believe him when he says:

Well, I think that would be like picking up a book and putting it down after the FIRST chapter. Read the whole book. Experience the whole story. Go on the ride. It would be a really boring story if our heroes didn’t find themselves challenged or didn’t face obstacles. #ItAintOver https://t.co/cIH4nUS74j

There’s always more Star Trek coverage here at Black Nerd Problems. You can find them all behind the Star Trek Tag.