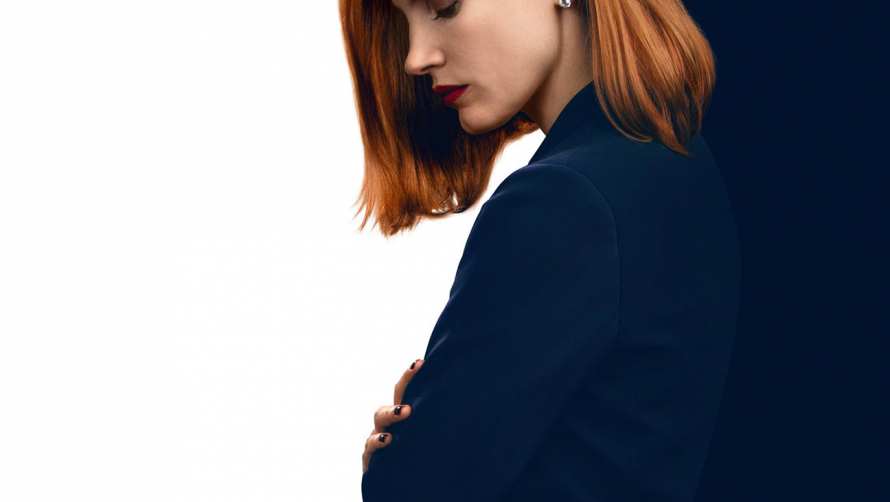 As a political thriller meant to capture the underhanded dealings of lobbying and, in larger scale, offer sensationalized commentary on political corruption, Miss Sloane does well, at least, in nailing the sensationalist part. The film follows Elizabeth Sloane, the tactician’s tactician when it comes to political maneuverings, as she jumps ship from one side of a Senate vote on gun control, to the opposite side, for the sheer challenge of winning. Gun control is an issue you would expect an educated, politically-minded person to hold convictions or opinion, but it would be the wrong assumption in the case of Sloane who, as far as you’ll ever know, cares only about winning, having sold her soul long ago and, for a frustratingly unshared reason, sacrificed her morals to live a life based on her skill of lying.

Miss Sloane’s reputation precedes her in Washington as a cutthroat strategist who stays one step ahead of everyone in the ultimate political chess game, to which the film captures aggressively and often. Any argument? Sloane wins. Any plan? Sloane has a counterplan. Miss Sloane is a movie starring the character essence of Peter “Littlefinger” Baelish in modern-day Washington, D.C., only with no other competitors in the Game of Thrones. When Sloane switches to the pro-regulation side of the gun control debate it’s solely for her career, as the somewhat cliché representation of the woman who excelled in her career at the loss of her humanity, and who, perhaps, might gain that humanity back and find herself again. She lives on a diet of pills and her personal life is limited to male escorts and nothing else, but she is fierce, feared, and wealthy. Along the way is twist after turn of political manipulation as her pro-regulation lobby fights against the anti-regulation lobby for the number of Senators needed to pass or defeat a bill requiring universal background checks for sales and transfer of ownership of weapons. 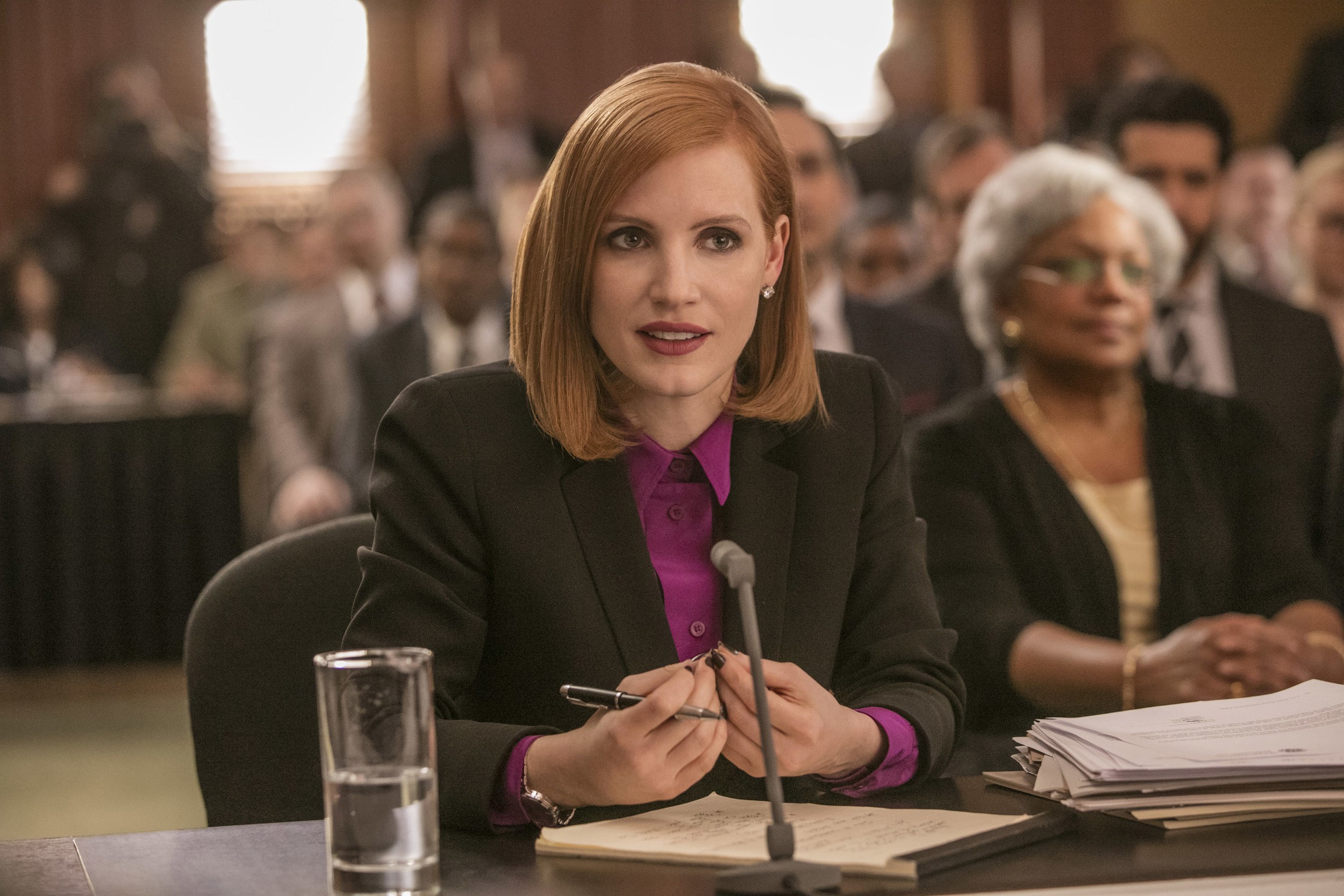 Sound familiar, like bills that have been proposed in real life? The bill itself, the Sloane-universe analogs to real life tragedies like Columbine and Sandy Hook, along with the general air of ubiquitous government corruption make up the realistic structure of the film, the skeleton supporting the details of the narrative. It’s definitely needed, as elements of the story itself, on the other hand, quickly become too impracticable for the film’s own good. To say the film had a “twist” would be like trying to identify a season of 24 as the one where Jack Bauer fought terror. That is, there were twists – many of them – so many that your ability to see them coming speaks less to your awareness and more to how much disbelief you are willing to suspend. Miss Sloane’s script at times felt like the Now You See Me of political drama. Just when you finished rolling your eyes at one improbable twist (did you know she can lip read?), the next lowers the bar as to make the previous seem reasonable by comparison, with the most ridiculous saved for the end.

Where Miss Sloane is most successful is its character portrayals, from Jessica Chastain’s lead as Elizabeth Sloane down to each supporting actor and actress who save an unpolished script by exemplary performances. The capability of Sloane’s character is one Jessica Chastain is familiar with playing in her career, and it shows through her solid performance throughout the film. Jessica balances a public power with the private agony of substance abuse to keep her going, and an implied emptiness that eventually begins to unravel. She’s cutthroat to anyone – friend or foe – with the most compelling being those that involve friends, or at least the closest thing that Sloane has to them. It plays out most notably with Esme, played by Gugu Mbatha-Raw, a lobbyist with a moral compass who believes in gun regulation for its merit and wants to do good in the world.

Esme is the moral opposite of Sloane, good-hearted and comfortable with losing, humanity intact, whereas Sloane is only obsessed with winning, as we are often reminded. Their relationship is interesting by them being on the same team, an affiliation that is bound to significantly change one of them, if not both, when Sloane’s callousness manipulates Esme’s passivity. Other strong supporting roles came from Mark Strong as the ethical lobbyist and Michael Stuhlbarg as Sloane’s manipulative nemesis on the other side of the lobby. 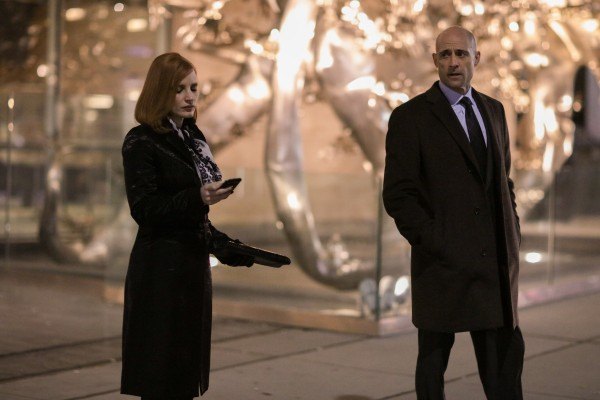 Sloane’s calculated manipulation and her penchant for lying suggest an upbringing that is alluded to but never explored, leaving for a few minor questions that feel annoyingly unanswered. Still, the film’s missed opportunities are easily overshadowed by shoddy political power-play dialogue and several absurd twists too many. Perhaps most subtly annoying are the interpersonal power dynamics that often run amok in political drama, taking sharp dialogue so far as to fly off the rails. The tone is intentionally set to highlight that influence is currency, yet the dialogue becomes so sensational as to miss a fundamental understanding that treating literally everyone poorly does not earn you much of that currency; that a snake is feared because its camouflage keeps you from seeing it coming. Elizabeth Sloane’s negative reputation as a “repugnant” person precedes her, and if that isn’t enough she constantly berates those around her with the condescending, cold edge of a Claire Underwood mixed with Ari Gold. Yet her team is somehow endeared to her, presumably to climb their own careers because the endearment is otherwise senseless. One woman on her team does question her methods at least, and repeatedly, until she is forgotten and proven fairly inconsequential.

Overall, Miss Sloane is a serviceable political drama carried by its strong cast performances and undone by its attempt to do too much. It begins with a solid conflict before outsmarting itself, and by the movie’s end it can be hard to remember the promise Miss Sloane once held from its its trailer through the first third of the film. The movie also falls victim to an unexpected political climate, of course outside of its control, but affecting viewer perception nonetheless. Coming on the heels of the 2016 election, one cannot help but wonder how the movie would have landed if written a number of year sooner, or if the 2016 election season were not an unpredictable fiasco that changed how many of us look at our country and its politics.