[dropcap1]W[/dropcap1]e hit the proverbial jackpot scoring an interview with Captain America: Civil War’s Academy Award-nominated costume designer, Judianna Makovsky. One look at her extensive resume shows that she probably dressed all of your favs, so you’re welcome, everyone. I feel like the real winner right now but enough about me, let’s get to the real reason why you’re here. -Brittany

Judianna Makovsky: I love the name of your website. It’s fantastic! That’s a brilliant question! Well obviously starting at the opera as a child of five I guess my sensibilities are a little bigger than life. You’re dealing with outsized personalities when you grow up in the opera world. As a young child in that world, you’re learning how to collaborate and deal with a lot of different people and I think that really helped with working in the movie business for sure. It did absolutely affect how I look at design, growing up with these, as I said, larger than life costumes. That is a great question, no one’s ever asked me that before.

BNP: So with Civil War and The Winter Soldier you were coming in off of another designer’s work. How much creative freedom do you get when you’re working on a film like that?

JM: Well, I did The Winter Soldier so that was my sensibility. Because the first Captain America was a period film mostly, that one didn’t play into it as much as frankly coming off of The Avengers. The one thing that’s really interesting working with Marvel, you get very close with the other designers on the other films. So I certainly talked to [Alexandra Byrne] a lot and you sort of use that for inspiration but each director for each film. They have their own vision and you have to change it to their vision. So I think Joss Whedon has a much more colorful world and the Russos have a much more realistic, tactical-based world. So you have to sort of adapt everything and change it to each director’s vision.

BNP: When you’re designing for characters who are fighters how much do you include practicality and real-world safety features into your designs?

JM: Well in the original concept you try not to think about that, you know your first sketch or whatever. And then you go oh, well that’s not going to work because you can’t get them in and out of it or we can’t do this stunt or that. So it changes as you start making them. But a lot of my job is to figure out how to make these things work for the film and so the actors can actually move and walk and talk in them and then the stunt men or the actors can, because a lot of the actors do their own stunts on these movies which scares me to death, you know, can make it work. Often we make different versions of the same costumes to do different stunts, if it’s a particular stunt that’s going to be dangerous. Going into it we accommodate. We have harness versions, we have the hero versions which are the beauty costumes. So a lot of that is what we do to try to make these functional. 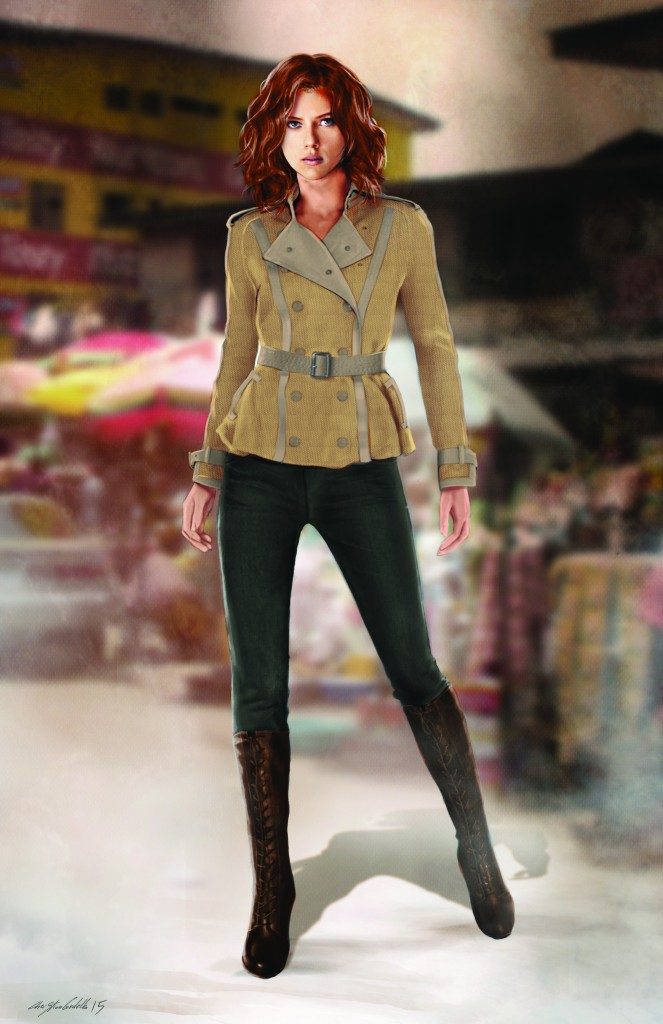 BNP: So one thing with stuntwomen, they often have a harder time doing the work because there’s usually less to women’s costumes than to men’s. Did you think about that when you were designing for Black Widow, Scarlet Witch, and even Sharon Carter?

JM: That is true. Absolutely. I really do think about that. I mean a lot of times on certain costumes like let’s say Black Widow, we work with Visual Development from Marvel and they’re usually boys who draw these things and I go I can’t get all that on a little girl’s body so we have to change it all. Particularly in Civil War I wanted to really make Natasha much more sleek and make it a simpler costume so you really could see her. I find a lot of times if you’re looking at the costume too much you’ve made a mistake. You’re not watching the actor or the character. It should not get in the way. You should look at it once and then watch the character. So it’s all in mind to sort of pull back. I like things fairly simple, I must say, I really want to watch that actor. And it’s true you do have to do different things for women than men, you do have to make it simpler

BNP: So I know Chris Evans said that the Stealth uniform you designed for The Winter Soldier is his favorite Captain America uniform, do you have a favorite version?

JM: Oh, that’s nice to hear. I think that was probably my favorite because it was taking him in a totally different direction and trying to make it in a different way that it was more tactical and more believable. A lot of superhero costumes more and more they get these printed dots all over them, all this texture and they don’t look real. And I’m like, I don’t want that. Yes, it has to be stretch and it has to do all this stuff but I want it to look like a real fabric. I don’t want it to look like overly printed textures. It was a collaboration with Visual Development, and Chris, and my team on how to get this thing to look a little more realistic. And I thought it was pretty successful. And it was comfortable for him too, so that was good. Keeping the actors happy is one of my major goals in life.

[divider type=”space_thin”]
BNP: Do find that you have any signatures or easter eggs that you tend to try to slip into your designs for different movies?

JM: Not really. I can’t say that I do because I work with the directors. If the directors want to slip in one, okay, but I try not to do that. I try not to call, I know it’s terrible for a costume designer to say but I don’t want to call attention to the costume. I want to watch the story. You know, you look at them for a minute and then you’re back to the story. So I try not to put easter eggs there, you know, unless I’m asked to.

BNP: Do you find it’s more difficult to design for superheroes or characters who are coming from a well-known digital or literary source material than it is to design for original characters?

BNP: So my last question is, what has been your favorite film so far to work on?

JM: That’s hard. It’s always like the last one I did because I just finished it. But I have to say one of the best experiences has been, although there have been many, I’ve been very lucky, A Little Princess is still to this day. We had very little money. It was Alfonso Cuarón’s first movie in America. Alfonzo had a vision, he was very clear what he wanted. And we had very little money but somehow we were all able to give him the most beautiful and wonderful magical film. And to this day we all feel, you know a lot of us haven’t worked together for a long time, we just feel like family. So I have to say I’m very proud of A Little Princess. Alfonzo is a really great director.

Check out Judianna’s work in Captain America: Civil War, now available on Blu-Ray, DVD, and Digital Download, and keep your eyes peeled for her next Marvel projects.