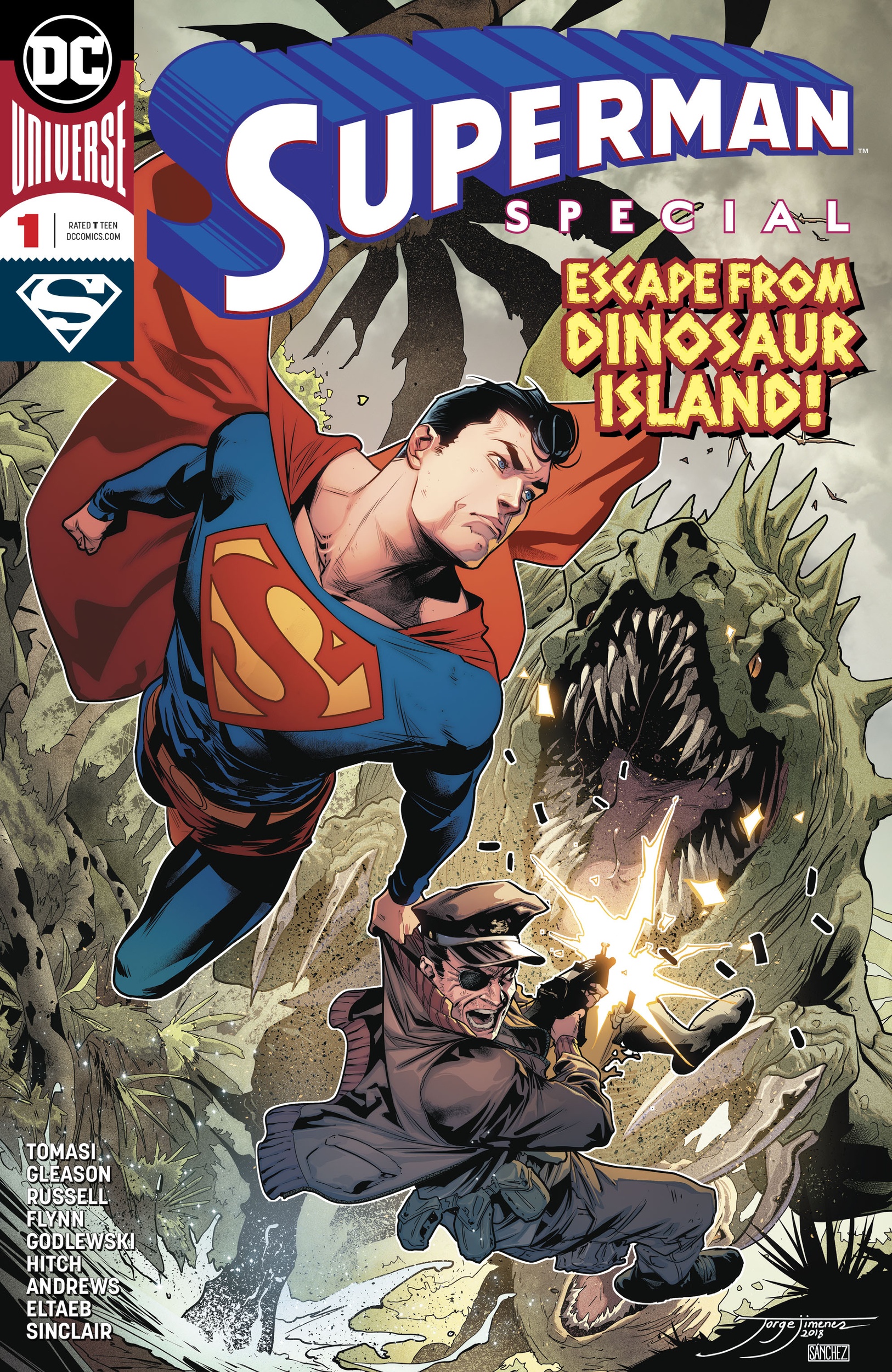 So after the milestone release of Action Comics #1000 and before the pending release of Bendis’ The Man of Steel mini-series, DC Comics has decided to gift us a small anthology of Superman stories to tide us over. We’ll be talking about each three stories in brief.

For Those Who Serve

Unsurprisingly my favorite story of the anthology, For Those Who Serve acts as yet another coda to the Tomasi/Gleason run on the character, this time closing out a plot point from way back when: Captain Storm being stranded on Dinosaur Island, brilliantly captured by Scott Godlewski.

Jon Kent, a.k.a Superboy a.k.a. Best Thing to Happen to Superman, opens the story with narration that immediately reinforces the fact we’re dealing with a kid who continually wants to help others even if there is a large risk involved. When Superman gets home, there’s not a moment to lose and the two go off to do some science and find a way back to the island where they rescue Captain Storm and slowly reintegrated him to modern society.

The story is poignant and subtle in its delivery and ends with perhaps what is the greatest burn towards Batman/the greatest acknowledgment of Lois Lane, and I am always finding myself wishing for more time.

Russell and Hitch’s endeavor is on a drastically different scale than either of the other stories, because it’s a mostly self-contain reflection on Superman’s upbringing. Russell employs multiple flashbacks to help establish how Superman’s merciful natures comes from his adopted father and being taught how to respect all life. Hitch’s artwork captures both a hectic urban landscape where a monster attacks and the gentle tones of the countryside.

The closing panels lost some of the story’s edge, but the journey was well worth it.

In the final story, Flynn and Andrews take us through a jaunt between Superman and reformed supervillain, Atomic Skull. Atomic Skull is visibly dejected when he sees that his captain has brought in his former arch-nemesis, and he just wants to be the good cop. Andrews’ artwork with Superman is par the course, but his take on Atomic Skull is wonderful. (I haven’t seen a skull so animated in recent memory.)

Flynn constantly reiterates the idea that everyone deserves a second chance. That our past does not define us. That we get to choose our fates. Ultimately, it’s gonna take some time, but it is possible. It’s a good message inline with the Supes philosophy.

Interestingly enough, each of these stories had enough merit to warrant their own issue. The combination of all three into a single package makes this is a very desirable issue for the Superman fan, particularly for those who loved the Tomasi/Gleason run.