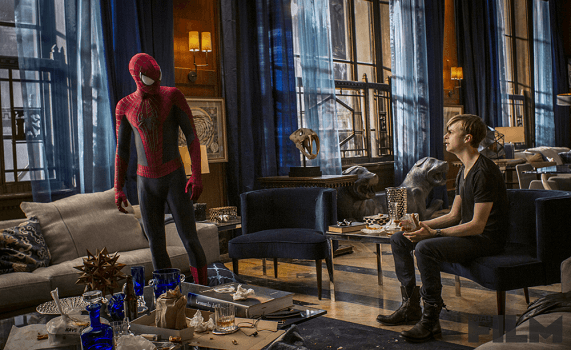 The fanboys are going to have to start learning to live with one inescapable fact: Spider-Man belongs to Sony and the suits would rather lob off their own pinkies in a fit of cocaine induced rage before ever giving him back to Marvel. It will not happen. So, the dreams of a Spider-Man/Avengers cinematic team are just that: a pipe dream that will come to fruition around the same time the Dallas Cowboys win another Super Bowl (that’s code for “Never”).

I say all that to say that Marc Webb’s follow up to 2012’s “The Amazing Spider-Man” is probably the most that comic culture can ask for out of Sony’s crack team of writers and producers which, judging by the amount of characters and conflicts crammed into 2.5 hours, must be legion. Civilian (non-nerd) moviegoers will almost certainly adore this visually arresting romp. Comic loyalists will be ridiculously divided. I remember sitting in the theater, seeing an unforgivably goofy moment in which Spider-Man (Andrew Garfield) saves three different people out of a frenzied stampede of hundreds from certain electrocution using his only functioning web-shooter and I could practically hear the true geeks groaning in unison. However, if they get past their perennial inability to share with mainstream audiences, this actually ends up being a somewhat decent addition to the webslinger’s adventures.

The movie opens up with us seeing Peter Parker fully embracing his whimsical personal as Your Friendly Neighborhood Spider-Man, loved by the city (most of it, anyway) and loathed by crooks. Meanwhile, in his civilian life, he remains tormented by Captain George Stacy (Denis Leary) who, with his dying breath in the first film, made Pete promise to keep his daughter, Gwen (Emma Stone) out of his death defying adventures. This probably fucks with him so mainly because of their resolve to ignore the Captain’s orders. This is easily the most compelling narrative of the film since it involves two of the best performances. Stone’s Gwen is brainy and confident which makes her an adequate leading lady for Garfield, the eight cylinder engine powering this movie, who really gets to show off as the fully realized Wallcrawler we didn’t get nearly enough of in the previous film, a witty Spidey that wisecracks through pummeling bad guys to hide his inner turmoil, stumbling through the consequences being Spider-Man has on his personal life.

Shoehorned into the narrative was Peter’s continuing search for answers concerning the disappearance of his parents (Campbell Scott, Embeth Davidtz) when he was a little boy. This felt like a rush job that led to a). a heartwarming scene between Peter and his struggling Aunt May (Sally Field) and b). a “sins of their fathers” plotline to link him to his long lost childhood friend Harry Osborn (a creepy, slightly emo Dane DeHaan), whose ailing father, Norman (Chris Cooper), owns Oscorp, the mega-conglomerate that Peter’s father worked at. The movie makes no bones about painting Oscorp as NOTHING but the sum total of every “evil empire” ever imagined from which nothing good is derived.

They don’t even have appropriate health insurance, evident by Max Dillon (Jamie Foxx), a dorky Spidey-obsessed employee who has an unfortunate spill into a vat of electric eels (I shit you not) and becomes the villainous Electro. Foxx did what he could with what the writers gave him, but he has so much natural charisma, he wears the nerd facade about as well as the Roach from Men in Black wore human skin.

Oh, and there’s Paul Giamatti as the Rhino, who feels about as “Aww shucks” and comically throw-away as Cillian Murphy’s Scarecrow from the Dark Knight films. In fact, I wouldn’t be surprised if we see him in later films getting beaten up for about ten minutes before Garfield goes on to face whoever his main threat ends up being.

Spidey has his work cut out for him as did Webb, who tried his absolute damnedest to tie all these conflicts together in a neat bow. He doesn’t necessarily fail, but the script’s Frankenstein-like stitches are definitely apparent. Although, in fairness, it’s clearer in this movie than it was in the previous one that the faults aren’t necessarily his fault. It’s obvious that this car was already fresh off the assembly line and that he was just the driver. Although this movie is at its strongest when it’s highlighting the internal conflicts of its major players, the battles still pack plenty of punch with enough “holyshitareyoufuckingkiddingme” moments that really show off why our hero is utterly BELOVED by the citizens of New York (to the dismay of some comic loyalists).

Bottom Line: Is it perfect? NO. Is it better than the first one? Possibly. Will EVERYONE be happy? Hell No. Will it entertain the majority? Most likely. In that regard, it was pretty okay. A mixed bag…but there’s nothing wrong with that. 7.5 out of 10