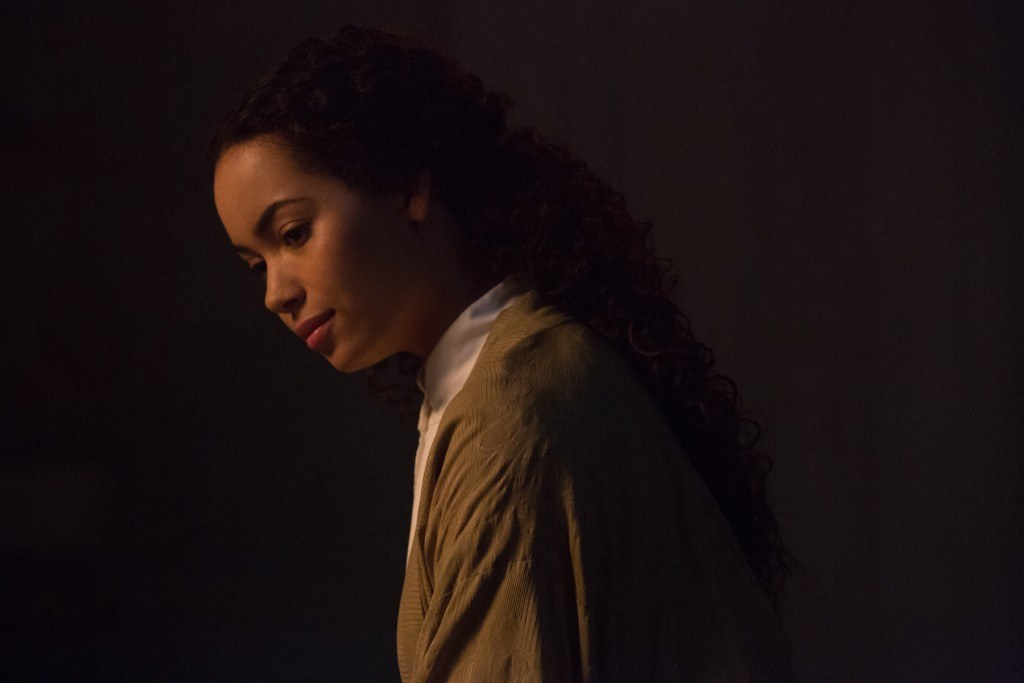 It’s no secret that here at Black Nerd Problems we ride hard for AMC’s post-apocalyptic martial arts drama Into the Badlands, and the upcoming season finale got us sharpening our #KillaClipps livetweeting blades in excitement. If you’ve been keeping up with our recaps, however, you know that hands-down our staff’s favorite character is the brilliant and compassionate doctor named Veil. I had the pleasure of speaking with Da Fictional Bae herself, Madeleine Mantock, about what the Badlands journey has been like on and off set for her.

Black Nerd Problems: What drew you to Into the Badlands as a project you wanted to be part of?

Madeleine Mantock: Aside from it being pilot season and needing a job, it was a really exciting script that had an individuality you don’t see every day. I think most actors would agree that the prospect of being involved with a network like AMC is a big draw, because they produce such great content. It was an added bonus to have the combined experience of our great roster of producers and I’m very grateful to be a part of it.

BNP: How has the experience been different than your past projects?

Madeleine: The production itself was unlike anything I’ve experienced before. We had a drama unit and a fight unit running simultaneously. Both crews worked to the bone and even though I didn’t get to work closely with the fight unit, I know we were incredibly fortunate to have the Hong Kong stunt team, led by Stephen Fung and Master DeeDee.

The character was different in the sense that Veil is less green in comparison to other characters I’ve played. I often play quite bubbly, cheery characters and it was nice to be able to withdraw and be a little more grounded.

BNP: You’ve previously described Veil as a positive force in a world of destruction. What is it that keeps Veil from becoming that destructive force?

Madeleine: Veil is presented with many opportunities to act in vengeful ways throughout this season, but chooses not to, both as a means of self-preservation and because she believes in the possibility of a simpler, more peaceful world. She has seen the destruction and debauchery that pervades the Badlands and makes an active effort to rise above it. It’s in her staunch refusal to participate that she finds strength and resolve.

I found this quote to be a great illustration:[quote_simple] “Our strategy should be not only to confront empire, but to lay siege to it. To deprive it of oxygen. To shame it. To mock it. With our art, our music, our literature, our stubbornness, our joy, our brilliance, our sheer relentlessness … Another world is not only possible, she is on her way. On a quiet day, I can hear her breathing.” – ‘War Talk’ by Arundhati Roy.[/quote_simple]

BNP: What has been your favorite scene to shoot so far?

Madeleine: I was fortunate to be able to work with most of our cast over the course of the season, and each character invokes a different response from Veil, which was great to play with. If I had to pick a favorite scene to shoot, I’d probably say the MK/Quinn scene at the end of episode 3, where MK visits Veil in her workshop for the first time. Aramis plays MK so earnestly that there was genuine wonderment and warmth between the characters; swiftly juxtaposed by Quinn’s entrance which is utterly disturbing (props to Marton Csokas for being great at his job!). For just a moment you see Veil allow herself to connect with this boy, before the barriers come back up again as she is faced with her oppressor and reminded of the world she cannot escape. 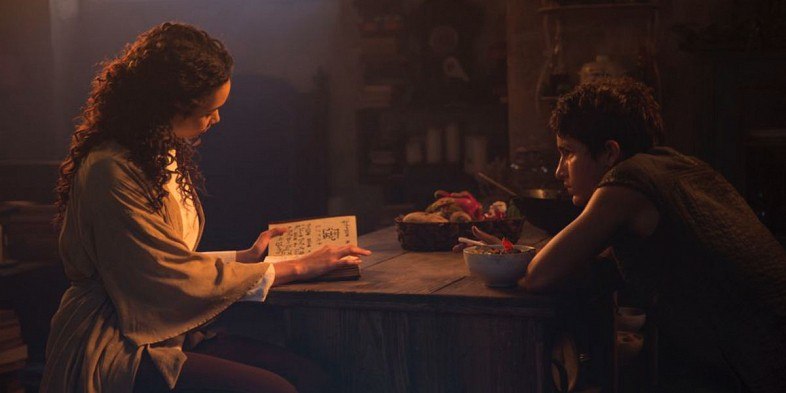 BNP: Are there any rituals that help you get into character?

Madeleine: We shot 3 episodes at a time, out of sequence, so I just tried to be as prepared as possible. Sometimes I would use music, but I generally find literature works best for me. I like to collect pieces of writing or poetry that I find applicable to certain scenes or aspects of the character. One in particular became a bit of a mantra for Veil, and I would often recite it on set because it exemplified moral fortitude:

There are also the external elements such as hair, make-up, and costume. They really inform a character, sometimes in ways you don’t want them to! For example, I wear almost no make-up on the show, which I was quite uncomfortable with. Usually, when you do a show, they try to make you look as fantastic as possible and so in this case, I felt incredibly bare. Now that I’ve seen the show, I realize that they were absolutely right to go with a ‘no make-up’ look. I like the simplicity that Veil has.

BNP: Recently you tweeted about people being insensitive when trying to pin down how “exotic” you are (as a mixed person I get this a lot). How do you prefer to be identified? Does this affect how Veil’s identity should be read, or do you think of her as more flexible to audience interpretation?

Madeleine: In American outlets I have been referred to as ‘black’ or ‘African American’ in some write ups of the show. This was new for me because I’m British and in England, if it were referenced at all, I’d be referred to as “mixed race.”

The question I’d like to ask is, who does this identification serve? I’m learning that the semantics of racial identity have little to do with how one perceives oneself, functioning more as a way to classify an individual or group of people for the benefit of others. On some days I am happy to indulge the curiosity and on others I choose not to spell out my family tree to inquiring strangers. I am all of my mother and all of my father and I accept and appreciate the cultures from both parents.

I don’t know if Veil’s identity has even been discussed by the creators. I suppose it might be solidified if we ever met her biological parents, but until then, it’s open to interpretation. I hope that people of all backgrounds will see a little of themselves in Veil.

BNP: What has been the biggest hurdle and greatest reward so far for you as an actor of color?

Madeleine: The biggest hurdle I’ve faced is tokenism disguised as diversity. It’s disappointing to recall the number of times I have been auditioning for a role and the feedback is: they really like you, but they are deciding where they want their ethnicity to lie. Meaning, there is more than one non-white person in the mix (for separate roles), and there is only room for one. Tokenism ≠ diversity.

The greatest reward is being afforded opportunities to work with brilliant, brave, creative people. Outdone only by being told that a child is happy because they see someone who looks like them on television. #RepresentationMatters

BNP: Blasian couples are still incredibly rare to find in popular media. Have you or Daniel Wu received any negative feedback from this portrayal?

Madeleine: At first, I just acknowledged that the two ethnic characters were together, which is not uncommon. The Blasian aspect only registered with me after we had started airing. People seem excited to have this portrayal on screen, and have really championed it. It’s a nice surprise because often when you shoot something, you have no idea whether or not people are going to buy in to it. There is beauty to be found in all four corners of the Earth, and I’m glad our audience appreciates that.

BNP: How does being on such opposite ends of the social and emotional spectrum affect Sunny and Veil’s relationship?

Madeleine: For the majority of the show, you follow the hero as he murders without question and inspires fear among the Badlands. I think the Sunny and Veil pairing works because through it, the audience is allowed to catch a glimpse of a softer, more human side to Sunny. It’s an intriguing pairing, but Veil truly believes that Sunny has a good heart and she wants to nurture that. She has enough goodness for the both of them and they are lucky to have found a little piece of bliss in a harsh world. I’m interested to see how solid the relationship is and whether or not outside forces will be able to drive a wedge.

BNP: How has the experience of livetweeting with fans affected your relationship to the show?

Madeleine: It’s honestly my favourite thing! People are so funny and creative and manage to pick up on things that you think may have been lost somewhere in the editing room. It feels like we are building a Badlands community and I think it’s really special. Thankfully, the feedback I’ve had on Veil has been nothing but positive. It’s always lovely when the audience cares about and roots for your character. It’s also been hilarious to see the responses to the other characters, because most of them are pretty deplorable.

BNP: If you were crowned baron and magically given any skill set you wanted, what weapon would you wield? What would be your strategy in the current baron war?

Madeleine: That’s a tough one, because I would love for there to be peace in the Badlands, but then there’d be no show! If I had to join in with the barbarous goings on, my weapon of choice would be nunchucks. Because, Bruce Lee. I would really like to see some Tai Chi on the show. It was a part of the boot camp we did prior to shooting and I loved that it has this serene, fluid, almost meditative quality. I think it could add to the spiritual element of the show because it’s all about the connection between mind and body and building and harnessing your inner strength.

BNP: What is the one thing you hope audiences feel or learn from watching you as Veil?

Madeleine: My mother taught me the importance of forgiveness and compassion and my father taught me to be strong and to have integrity. I’ve tried to bring a balance of these qualities to Veil and I hope the audience gets a sense of that.

Watch Madeleine in action on the season finale of Into the Badlands at 10 PM this Sunday, 12/20/2015 and livetweet along with #KillaClipps!