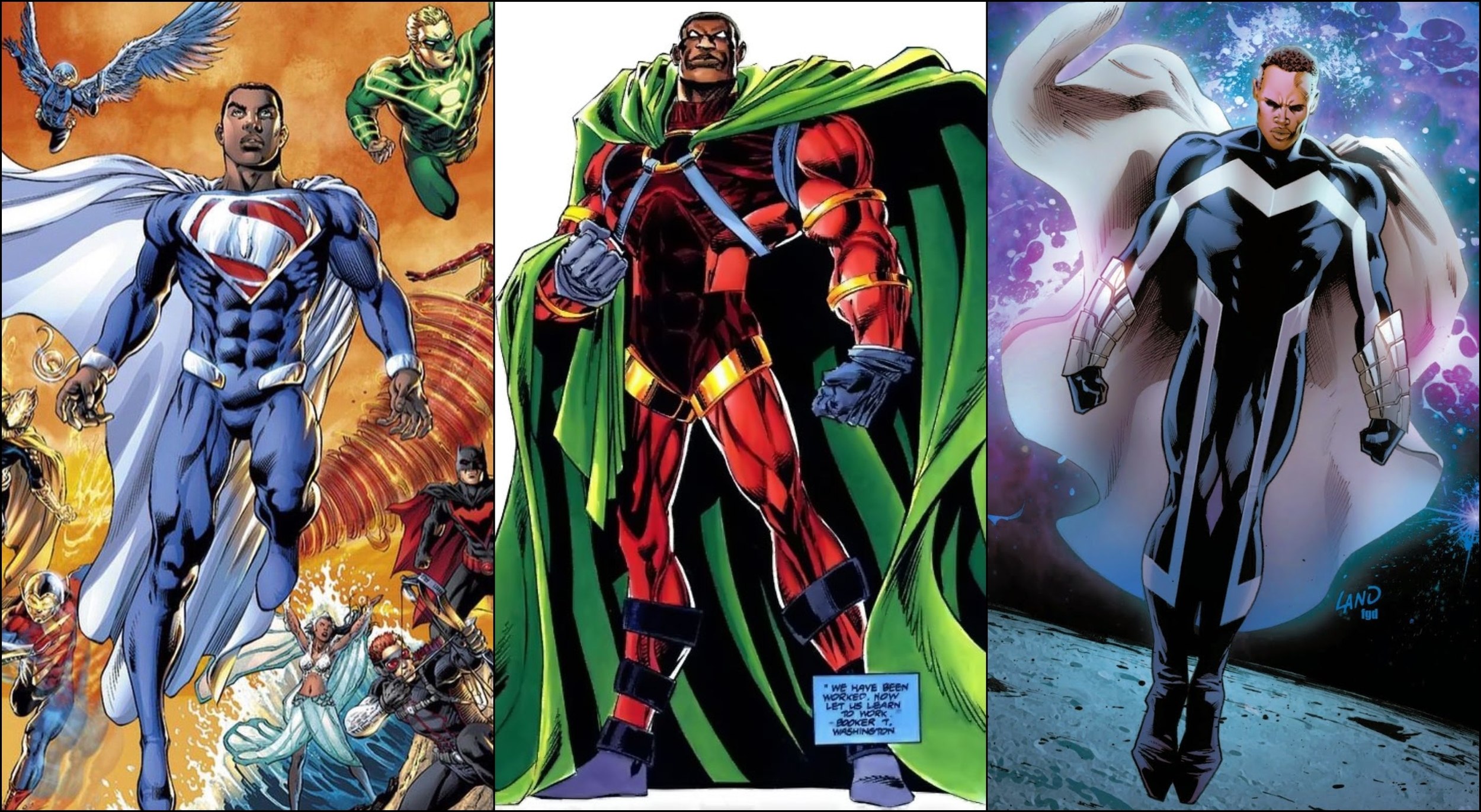 As Warner Bros. haphazardly tries to revitalize interest in its DC films, they have made some interesting moves. Many of which include moving away from its shared universe and making more separate standalone films like Joker and 2022’s upcoming The Batman. And if you’ve been paying attention these last few weeks, there’s the curious case of the new Superman project in development; a project produced by J.J. Abrams, written by acclaimed author Ta-Nehisi Coates, and set to feature a Black Superman.

Now, the mention of a Black Superman is enough to light up any discourse, and there’s only more to discuss until this movie finally drops. The latest bit of news paints an interesting picture of what the film might be. Yes, we are getting a Black Superman and if the reports are correct, we are once again following the story of Clark Kent/Kal-El. It’s a strange choice, especially when it feels like we are in an era where origin stories for well-established characters are unnecessary.

With Coates behind the script, there’s a good chance that we will get something compelling. However, one can’t help but feel like this is a missed opportunity. It’s not only a strange choice to once again revisit the origin of Clark Kent’s Superman but strange when there are several other Black Supermen from DC that already exist. It got me thinking. Not just about DC Comics’ various Black Supermen but the other Superman types in comics. Most importantly though, it made me think about the very idea of what it means to have a Black Superman.

There is plenty of iconic imagery associated with Superman. One of which includes the image of bullets bouncing off of his chest. Now, whether you liked Netflix’s take on Luke Cage or not, there was something powerful about seeing that same kind of imagery with a bulletproof Black man in live-action. As tired as we are of trauma, it’s hard to ignore when it comes to the history of Black people in America. To be invincible in a world where our community is most often vulnerable and constantly targeted speaks on so many levels. With Superman though, there is an added layer to making the Man of Steel Black.

Superman is a symbol for many American ideologies that, truthfully, most of America doesn’t really live up to. Superman, like Captain America, represents who people should be. He’s a symbol of hope, truth, and justice. To champion the weak and to maintain moral integrity. Living up to those ideas takes an interesting turn when the person wearing the symbol is a person of color. Yes, classic Clark Kent/Superman is the story of an immigrant trying to find his place in America, facing apprehension because of his status as an alien.

However, the truth is that Clark Kent is also white. When you are white, you can hide in plain sight, and, alien or not, you are generally more accepted by the public. The same can’t be said when a person of color dons the classic symbol. The color of our skin alone makes us a threat and a target. Our history is a different experience, a different view of the world and as proven by those who have taken up a Superman-like role, there is adversity in and outside of the costume.

For example, let’s look at Milestone’s Icon and Marvel Comic’s Blue Marvel, two characters that don’t ignore the fact that it’s not so simple to make a Black man the world’s strongest being. Two very similar heroes rooted in controversy for their characters stepping to the side and not using their great power to prevent large-scale injustice in the world. With the gravity of what has happened to Black people throughout America, it’s easy to see why these two heroes get so much flack for being present during great tragedies and not doing anything about it. However, even with the strength of Superman, tackling those situations isn’t so easy.

When Icon landed on Earth as an alien, he didn’t choose many things. He didn’t choose to be Black, nor did he (despite what many think) simply choose to be a slave. So, with all his power, why not stop slavery? There is a lot that factors into this, from the discovery of his powers to his values as an alien. I don’t have the right answer but it is something that writer Evan Narcisse better explores in his article “Why Wouldn’t An Immortal Black Superhero Have Just Ended Slavery?” where he states:

“I think the real world answers to the question are more important, like the fact that heroes who re-order the world/universe in their own image don’t often stay feeling like heroes. Even interventions that seem relatively minor and/or altruistic, like ending slavery, would have exponentially bigger ripple effects. If a flying Black man starts tearing apart plantations, then slave-owners might start killing other Black people indiscriminately for fear of more metahumans in their midst. ”

Similarly, Blue Marvel faces the same struggle. He was the world’s premiere hero during the civil rights era. He hid his identity and race behind his costume in order to save lives without interference. For good reason too because as soon as the world discovers he’s a Black man with immense strength and near invulnerability, we see why a man with unlimited power being Black is so complicated. The government feared him for his power and Black people resented him for not using that power, and eventually, he was forced to step to the side to keep the peace in America.

“Re-ordering the world” is not as simple a solution as it sounds. These characters know that as well. They are invulnerable but the people they protect are not. The answer to these issues is a lot more complicated. Though Icon and Blue Marvel are both in similar positions to Superman, they’re different, and their worlds are different. Sure, they put down superhuman villains and stop bank robbers, but they have to find ways of helping the marginalized in effective ways. All while dealing with the fact that their power isn’t revered, it’s seen as a threat. There are many obstacles and more gray areas when it comes to being a Black “Superman.”

Living Up to the Legacy

In my opinion, Icon and Blue Marvel are the more interesting and complex Supermen. On the other side of things, there are the Black Supermen who convey different kinds of messages like Val-Zod, Steel, and Calvin Ellis. On the surface, they can seem like simple retreads of Clark Kent, but that’s not completely the case. You can think of these as legacy characters who serve a greater purpose. They inspire the idea that anyone can be or live up to the same ideals as Superman.

Val-Zod and Clavin Ellis are both Kryptonians and probably DC’s most recognizable Black Supermen. You can think of Val-Zod as the Miles Morales type. He has a similar origin, and he picks up the role of Superman’s successor. Meanwhile, Calvin Ellis (who we are not going to spend too much time on) is a bit more outlandish considering his role as “President Superman” and being modeled after former president Barack Obama. Race plays little into their origins or stories, but they come with their own separate struggles.

In fact, it’s strange that Abrams and Coates didn’t choose Val-Zod as their Superman. It’s the obvious choice if DC wanted to go the safe route and just put a black man in the Superman suit. Val-Zod would’ve been a perfect choice. His origin has its own journey to representing the S on his chest, where he is thrust into the role after the original Superman has turned evil. It’s a compelling journey of a legacy character living up to who Superman used to be.

The same can be said of Steel, who we all know as one of the four Supermen that appear after Superman’s battle with Doomsday. Steel isn’t Kryptonian but just a man. And after Superman saves his life, he’s inspired by everything the man of steel stands for. He goes the extra mile by creating a fully armored battle suit that replicates Superman’s powers and looks. His story even has some great individuality to it as he deals with his past as a weapons maker, advanced weapons, and gangs causing chaos in the streets.

Legacy characters like this have their place and as we’ve seen with Miles Morales hitting the big screen, there is an impact to seeing a person of color take on the famous mantle. Superman is definitely famous enough that everyone knows his story but does that origin need to be told again? Do we need to follow Clark Kent/Kal-El? Race bending has its share of complexities but what do we gain by making Clark Kent Black that we can’t get from exploring another Superman-type character?

I don’t know and we probably won’t get those answers until the movie starts to take form. However, I will say that it would be interesting to see a character of color take on the role Superman represents along with their own set of challenges.