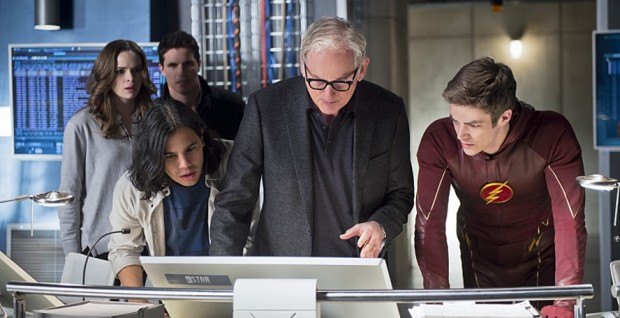 And you say Central City! Barry is finally face-to-face with Eobard Thawne and he just wants to know one question: why he went after his moms. Eobard was straight up in his reply, “Because fuck you. That’s why. I hate you in the future. Then I Bing’d you. Yeah… believe it or not, Bing takes over Google in the future. So I Bing’d you and got ya government and went back in time to merk you as a kid, but future-you saved you soooooo I killed your mom, cause I mean I was already there so why not. You left, but I needed you to get back, so I was stuck. Okay, as I say it back to myself it doesn’t really sound like the best plan. It made way more sense when I woke up that morning, I promise. Long story short, I had to make you the Flash sooner and train you to run fast enough to break the space-time continuum so I cold go home and you could save ya moms.”

Barry was soooooooo fucking stressed, man. He was having a hard time holding them alligators down from merking Eobard Thawne right there, but now he got a chance to go back in time by working with Eobard and save his moms. He takes it to the team and Professor Stein is the only one talking out loud like, “YOOOOOOOOOOOOOOOOOOOOOOOOOOO GO BACK IN TIME TO SAVE YA MOTHER? THIS SHIT CRAAAAAAAAAAZYYYYY. Wooo, glad it’s you and not me.” Mr. Keep-It-One-Hunned himself, Joe West, said, “Fuck time, fuck space, go back and save your mother. What we talking tho?” but Barry’s father upon hearing this was, “You need to let this go, man. You may go back and save your mother, but at what cost? You may change the series finale of The Sopranos… I liked the way it ended.” Iris finds Barry while he’s reciting Cher’s “If I Could Turn Back Time” on a rooftop:

Then discussing the whole future-married thing:

Barry better than me cause I woulda been like “oh… oh now you wanna explore the Jagged Edge “Let’s Get Married” song? The remix, of course.” Barry tells her going back may change things between them. Iris tells him to stop worrying about other people for once and get his self-care on.

Barry takes Eobard’s offer, and finds out he will basically be running suicides in the particle accelerator and then crash into a hydrogen particle, creating a wormhole for him to go back in time while Eobard can go forward in time back home. I mean, of course if Barry doesn’t hit the velocity he needs then ya boy going be looking like spaghetti and pasta thrown across the windshield of Jazz the Autobot while he doing 200 mph on the autobahn. Professor Stein was saying Barry gotta hit Mach 2 at the least in order to make this shit work. Barry also needs Cisco to build a time machine for Eobard out of the parts he left behind since he can’t control his connection to the speed force. Why Cisco try to play Ronnie out when he was helping him build the time machine tho? Like “this going to be more difficult than Ikea furniture.”

Ronnie: First and foremost, ain’t shit more difficult than Ikea furniture. You know how many times putting together a couch or bookshelf almost ended Caitlin in my relationship? Also, this metal is going to burn up if we use it.

Cisco had to respect the game on that shit, so he goes to consult Eobard on how to best to solve the issue with the metal. Man, that’s gotta suck — you gotta go back to talk nuts and bolts with the dude that merked you? Ughhh.

Eobard is going over the schematics, praising Cisco and Ronnie for catching what he missed, but Cisco is basically like, “Whatever man, tell me how you got that outfit into the ring… and is equal pay finally a thing in the future?” Eobard trying to get Cisco on his side to understand his predicament, but Cisco drops the “fuck you, you killed me” verse on Eobard. Eobard then realizes Cisco can see through the universe’s fabric and into alternate timelines. Cisco is a metahuman himself. And as far as the whole killing him thing:

Professor Stein is the one to finally get Eddie Thawne from being so down on himself. He tells him he has the power to write his own history — he’s the wild card in this plot. That makes Eddie then go after Iris and tell her about this dancer he was supposed to go on a date with, but then her knee went all Derrick Rose, so he wound up catching the thief that took Iris’ laptop which led him to meeting her.

We also find out from Professor Stein that this whole blast to the past could open a singularity over Central City. Now why they had Caitlin be the one to ask what a singularity was? You work at Star Labs, man… at best I know you at least saw Interstellar. It’s a black hole, yo. They confront Eobard with this and he’s like, “Fuck y’all worried about? It worked out for Matthew McConaughey in Interstellar, and Barry will have a minute and fifty-two seconds to get in, fix the past, and get out, soooooooooo…”

[divider type=”space_thin”]
Ronnie and Caitlin get married before Barry goes back in time and hits the reset button. I mean, hopefully that won’t mess up their shit cause that would suuuuuck. Later on, Barry has the final moment of “I’m about to do this shit” with Joe as he realizes the weight of what he’ll lose by going back to save is mother. Maaaaaaaaaaaaaan, that’s a lot on the plate, yo. My mom would’a been like “don’t you come back to save me and open up a black hole over the city… raising my insurance. I taught you better than that.” Joe assures him though that he will always have him no matter the universe or timeline.

Barry says his goodbyes to everyone and then steps into the particle accelerator to run them UCLA’s and go back in time. He hits Mach 2 like it was nothing and enters all up in the speed force, seeing the future, past, and present all at once.

The hydrogen particle gets dropped and ya boy goes back in time just as planned. I’m more upset that Barry saw Oliver falling after Ra’s Al Ghul kicked him off the edge and kept it moving, like “Weeeeeeeeeeelp.” You ain’t have enough time to go in and fix some shit with season 3 of Arrow, Barry? That’s just selfish, man. Barry was about to wait for his future-self to take his child-self out so he could save his mom, but then THE UNTHINKABLE HAPPENS:

FUTURE-BARRY SAID “HOE DON’T DO IT!” AND PRESENT-BARRY LISTENED??! OH MY GAWD! Barry had to trade saving his mom for getting to be there for the last moments of her life. Telling her he is the flash, his moms was like “…oookaaaay, not sure what that is, nor do I have the time to figure that out cause I am bleeding to… oh you look like my father…WHOOOOOOOA! BARRY? From the future, ooooooooooooh, that shit nice.”

Meanwhile, back in the present, Eobard is getting ready to get the fuck outta dodge:

YOOOO JAY GARRICK’S THROWBACK HERMES FIFTY (FIDDY) CAP CAME THROUGH THE WORMHOLE AND EOBARD THAWNE WANTED NO PART OF THE SIRLON STEAK GRADE-A BEEF THAT THE GOLDEN AGE FLASH OF EARTH 2 WOULD HAVE FOR HIS ASS!!! Eobard was saying his “fuck all y’alls” to everyone, but as he was putting the time sphere into 1st gear HERE COME YA BOY BARRY ALLEN back in record-speed shouting:

Eobard: WTF?!?! DICK MOVE! DICK MOVE, MAN. Why are you back here? You could’a changed the past. You could’a had all your family together, everything you been wanting…
Barry: I’m good.

Man, them speed fists start flying and Eobard puts the bib on cause he styling like that and brings back the old Honey Mustard Flash suit. He went to town on Barry cause he must’ve been really, really pissed about dude fucking up his whip, man. Just as he was about to put the Mortal Kombat vibrating finisher to him we hear the sound of a choppa go off in the distance.

YOOOOOOOOOOOOOOOOOOOOOO EDDIE STRAIGHT UP LAUREL’D HIMSELF PERMANENTLY TO SAVE BARRY. We See Eobard Thawne burst into light, getting erased from history. The worm hole gets shut down… but then reopens and turns into a black hole. Ayebody has to get out. And poor Eddie, man… this cat gets sucked into the void with all his earthly tether GONE.

Daaaaaaaaaaaaaaaaaaaaaaaaaayum, Eddie. Hey man, you never did wrong by me. You ain’t deserve to get sucked up into all of that. If I’m taking bets I think he’s gonna come back as Cobalt Blue, but that’s just me. ANYWAY, the city is under siege from this black hole and all of Central City is seeing it — civilians, soon to be heroes (shout out to Hawkgirl), and villains (Captain Cold) alike. Only way to reverse this shit would be to run suicides at a speed that would take 6 years to put into scientific notation… so what ya boy Barry Allen do? He said, that’s it? I just gotta run up in this black hole and do a couple suicides? That ain’t dangerous, that’s a mutha fucking Tuesday for me. Dude took off his boots, put on his throwback Reeboks, did 5 pumps on’em and then proceeded to give us the season finale we need and deserve.

Thus concludes the first season of The Flash. We’ve got some confirmations of what season two holds: more speedsters, the multiverse, and more villains, but I think it’s safe to say right here and now we might as well get that Barry Allen jersey hanging in the rafters cause you know damn well Barry ran up in that black hole singing that Drake “Legend” Hook to himself: