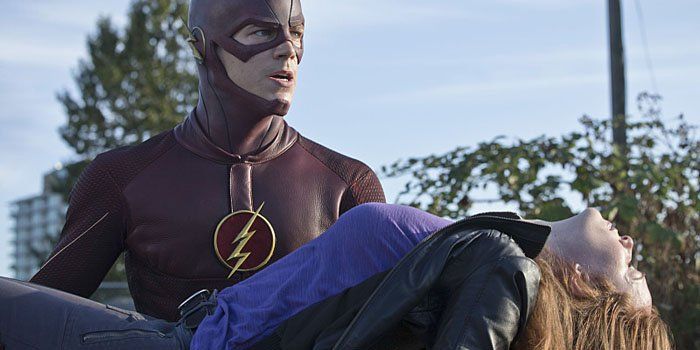 It’s been a long time/ Wish the Flash left you/ For much longer of a break because it pains me to write this review.

I’m not a rapper, I’m a writer and it looks like the CW is continuing it’s history of not hiring any as we roll into this, the fifth episode of what could be so much more; doesn’t Barry Allen deserve more than this? This episode introduces the aptly named, Plastique, who is as disposable as her name suggests.

A new meta-human who involuntarily infuses anything she touches with the unstable properties of spontaneous combustion. We start the episode with Barry having more than a few drinks and realizing that he’s unable to get drunk; sounds like the worse super power side-effect I’ve ever heard of if you ask me. He and the crew all rush off when a call about an explosion makes it to them and Barry develops a new ability that I would have learned on day one of super speed; running up buildings. He also, later, learns that he can run on water; ability number two that I’da… ah what’s the point in belittling these writers further.

This episode really focuses around Iris West and her obsession with ‘The Streak’. Joe West puts Barry on the case to dissuade her from writing about him both as Barry Allen and The Flash, neither of which work out favorably except to cause a ‘breakup’ between Barry and Iris as if they were dating. Joe West does, however, reveal that he’s noticed Barry going from six-to-midnight every time he’s around Iris and gives him a reassuring hug that looked as manufactured as the soft villains the Flash has been facing through five episodes.

We’re also introduced to General Wade Eiling who disposes of Plastique in the most lackluster of meta-human kills to date on this show. He also proves that he’s got almost as big of a man crush on the Flash as Dr. Harrison Wells and it seems as if the rest of the season may play like an all-out highschool crush-war between the two vying for the Flash’s affections. Our next episode, titled, The Flash is Born sounds like it’ll be a flashback (pun intended) episode where we possibly learn more about Dr. Wells’ motivations as well as, hopefully, setting the landscape for a nice showdown between the Flash and Gorilla Grodd who’s been the only worthwhile mention of a villain in the series so far.

See you next week when we hopefully have less teen-aged themed angst and more Barry Allen, the stuff of legends, action.