Wally opens up the episode on his Forest Gump love of running as a speedster game. He wakes up and immediately finds Joe to tell him that he’s been dreaming about finally having powers. They even called him Kid Flash in the dream! But you know Joe wasn’t trying to hear that noise. Joe was in Dad Cop mode.

Draco Julian continues to be the most potent dick, professional Barry hater and all around slime ball as Mr. Malfoy investigates the 6th husk to wash up on shore. Good try Barry, good try.

S.T.A.R. Labs:
HR continues to brighten up my Tuesday nights by being the most absurd incarnation of Harrison Wells. This dude is all over the place trying to keep The Flash’s secret S.T.A.R. Labs connection under wraps by proposing that they convert the building into the S.T.A.R. Labs museum, with him as the face. It seemed to be about time to tell him that he is one of the most wanted men in C-City. It also seemed about time to tell him that he would be shot on sight or arrested as aggressively as an unarmed black man the moment he set foot in dem streets.. with that face. It was also about time that HR tell the team that Earth 19 has muhfuckin face swapping devices!!

CCPD:
Joe talks to Barry about this turn of events for Wally. They realize they’re gonna have a problem on their hands if things keep going this way. But that’s not important because Barry witnesses Joe on his Jesus Shuttlesworth cuz he still got game! Joe puts that tall dark and handsome charm on Cecil when discuss their movie night plans. I’m telling you, my boy Barry was more hyped than the star QB’s best friend after his boy tossed the winning Touchdown. My son Barry was more hype than Michaelangelo when the pizza delivery man knocks on the door. More hype than a house of frat boys and 6 kegs. More hype than the cast of Heavyweights at the buffet. He was SOOOO GASSED to see his pops finally take advantage of Cecil’s beautifully forward advances. I’ve never seen a budding older relationship more steamy. Crazy chemistry. S.T.A.R. Labs:
Caitlin realizes she needs to talk to somebody about her situation and C-City’s Hack Gawd is up for the Montell Williams listening session. Homegirl freezes a cup of water to show him how real the game be. But does Cailtin stop there? Oh noooo she asks Cisco to vibe her future so she can decide if she needs to leave the city to avoid hurting people as Killer Frost. He does. He sees her hurt future. Them two battling for these C-City corners, sending ice and vibe blasts at each other’s neck battling to the death. He lies. Caitlin walks away thinking she’ll actually have a life that doesn’t entail trying to kill her friends.

Meanwhile, Central City’s money don’t stop for nobody. We know this because the writers are so good at showing a guaranteed-to-get-bodied broker leaving his job shouting stocks and finance jargon into his phone. Rabble rabble rabble, he dead. By..a..really dark…shadow!! Now I been crazy patient with these baddies of the week this season, but after Mirror Master, I damn near lost my mind thinking about the landfill levels of trash this week’s villain would turn out to be. Then I remembered the title of this episode. Shade. And the jokes flooded my cranium.

S.T.A.R. Labs:
Then Cisco took the damn words out of my mouth when HR identifies this meta as the same one on his Earth, Shade. My main man. My Ruff Ryder. My dude Cisco comes in with his snark levels over 9000 when he says, “Shade? What does he do, throw side eye at his enemy?”

The joke was so low key but such flames. I was weak. After reviewing the hacked C-City surveillance cameras, they figure this dude looks like a shadow and moves the way he does by slowing down his molecules when he attacks. Barry tells the team that they need to handle this cat ASAP because Wally is well on his way to the Dr. Alchemy split personality killer zone.

CCPD:
Wally, who had been missing for like 3 days..cuz defiant teenager, finally pulls up to talk about the young man’s desire to get these powers, but Joe still aint havin it. This time, he helps Wally understand how different his way of obtaining powers would be compared to Barry’s acquisition of speed. It’s like chess and checkers son. Orochimaru and Jaraiya B. Mario and Sonic fam. Oh and to top it off, this youngin’ can’t even make it out the precinct before collapsing, thanks to Dr. Alchemy ramping up the memories of his Flashpoint pain.
STAR Labs:
Wally is rushed in and hooked up to the medical equipment. They know they have to keep an eye on him, but the team also knows they can’t let Joe cancel his bae goals just to babysit. HR may not be an actual genius but he helps where he can and suggests that they put Wally in the Pipeline then divide and conquer. Barry is down to tag along and jot down some notes on how to be an OG. HR jumps at the opportunity to explore this world and do some research for his book that he’s finishing for George R.R. Martin, Winds of Winter. Caitlin and Iris decide to stay behind to take care of Wally, and Cisco suspiciously jumps at the chance to distance himself from Caitlin..but this a house of scientists! So of course she catches on and switches her mind to go to the movie with the squad.

Movie in the Shady Park The gang’s all here and Joe is ready to slap HR’s teeth down his throat for intruding on his honey dip date. Did I mention that HR conveniently stumbled across his face swapping device that Earth 19 has invented and are apparently as standard as a #2 pencil. Yea so he here in the park with a non-Wells face talking Cecil’s ear off anddddd just when the movie is bout to pop off Supreme Shady Shitty powers having ass dude appears and begins to wreak havoc in the park. Flash is called up from the minors to handle things while the gang prepares to take out Noob Saibot’s trash cousin. They hop in the van and…wait for it… HIT THE HEADLIGHTS AND DISINTEGRATE HIS SHADOW!! All that is left is a feeble man who easily gets handcuffed. Terrible, terrible depressing villainy. 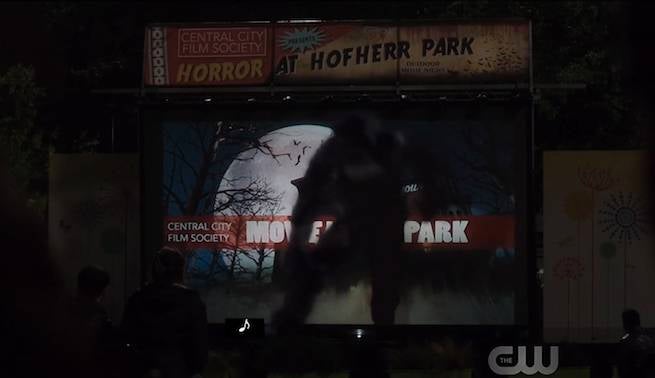 Simultaneously Iris goes to try and ease Wally’s imprisonment, but that can’t really happen when the young brother is literally writhing in pain because of the Dr. Alchemy yelling “THE TIME HAS COME TO SET YOU FREE!”. Out of nowhere, Wally goes full Exorcist psycho from asking to demanding that she let him out. Then Iris goes and lets the kid out!! Now, I’ll admit I thought it was going to be the same ol same ol idiotic Team Flash member get duped into letting the prisoner go, then they escape, but that is not what went down here, OH NO! Our girl goes from Iris West to Iris ‘Hands of Steel’ Ali!!

The team rushes back to check on Wally and Iris and quickly determine that they need to get down with Wally’s plan to lure Dr. Alchemy out using Wally as bait. If they leave him to rot, his seizure like symptoms could cause brain damage, but what if we’re walking into a trap? No time to second guess that shit cuz Joe West brought the Grade A SWAT TEAM in for the protection of his heir!!!

[quote_simple]Sidebar: Julian called out of work, which he never does so of course he’s Alchemy.[/quote_simple]

The Flash, Joe, Wally and an entire fucking SWAT team roll up to this abandoned underground subway lair. Wally walks into Alchemy standing over 2 kneeling bodies on some Mayan sacrificial shit. He sweet talks Alchemy as A-Boogie does his whole, “Do you want the life that was taken from you?” spiel until Wally calls in the heavy guns. Flash puts the beats on the crew until Alchemy breaks out his crazy blue blaster and puts Flash on his ass. Now it’s Flash’s turn to call in the heavy artillery and Joe comes in with the finger always on the trigger! 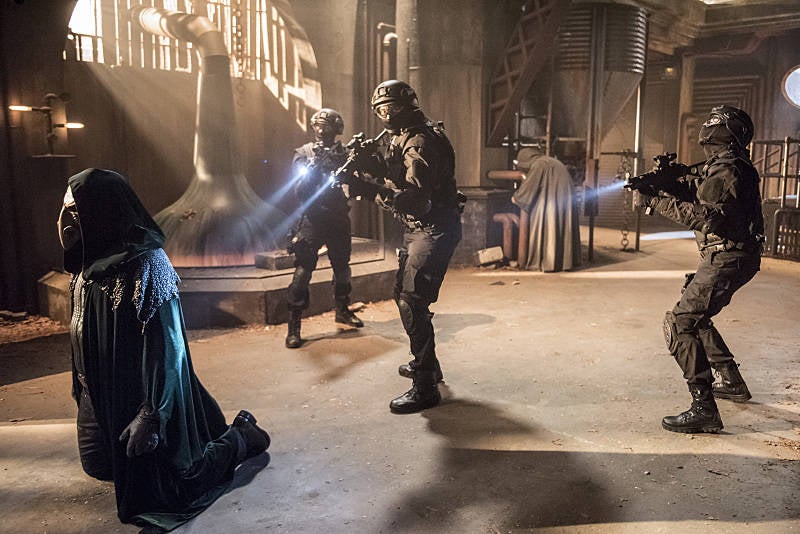 As they wrap things up and are about to unmask this Anubis wannabe, Wally goes and picks up the blue blaster stone that Alchemy dropped and BOOM!! Lights only Barry can see flash by and SAVITAR THE SPEED GOD PULLS UP AND BEATS FLASH SILLY LIKE CRAIG DID DEBO.

Our big bad of the season has finally arrived folks! Just in time to put the cherry on top of an amazing episode.

That whole thing with Cisco accusing HR of stealing the power suppressing cuffs was great and only got better when Cisco had to admit he was wrong.

Barry and Iris broke out the piano/violin super soft music when Barry told Iris that without her, there would be no Flash. It was adorbs. 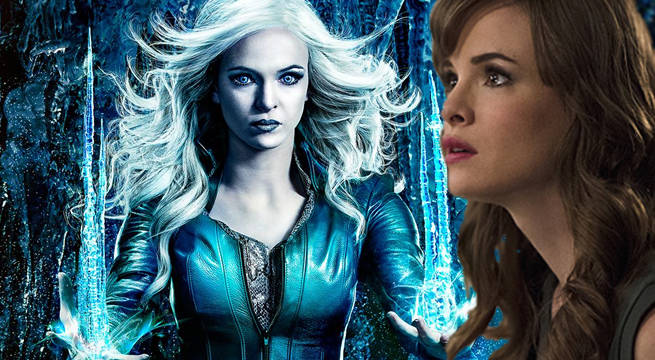 Cisco telling the team that Caitlin has powers was a pretty dick move, but one I felt needed to be made. They broke out the piano/violin music for the apology though. Our boy Cisco dropped one of the most beautiful, powerful and moving speeches to help Caitlin when she was doubting herself and her abilities.

“when it comes to the impossible, we’re the experts.”

Peep that look Caitlin gave Barry when he told her that she never became Killer Frost in the original timeline? #VillainMotivation