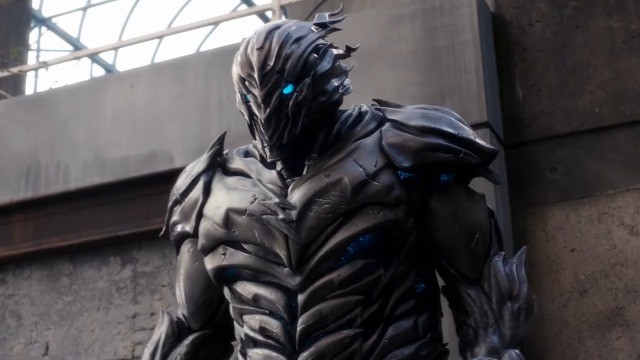 The Wrath of Savitar starts off in an unexpected place. The Flash, Jesse Quick, and Kid Flash all racing through the streets of Central City, trying to get Kid Flash’s game up. I say unexpected because the end of last episode showed Savitar appear while Kid Flash was running bf errands. Pretty sure everybody and they moms thought he got his ass snatched up. The test was a success. The Kid’s speed is rising, but what’s up with seeing Savitar?

S.T.A.R. Labs: Julian returns to C-City and is greeted by sprung Caitlin. He dubs her and they act like that shit wasn’t awkward AF. Barry and Iris reveal the wedding plans and everyone bugs out. Barry asks Cisco to be his best man, after HR injects some great humor thinking he was gonna be asked *slight smirk and an eye roll*. Cisco is down as long as he gets that plus one for Gypsy. Joe is mad Barry didn’t go 1960s on ’em and ask Joe for his daughter’s hand in marriage. Is this really the drama we need in this show? Savitar terrorizing Wally ain’t enough? Fuq we talkin bout?

Dem Streetz: Barry and Wally respond to a 3-alarm fire but Wally is yoked up and swung into a wall and smashed into a car by Savitar. The Flash watches from a distance seeing nothing, but Kid Flash flailing about all Magikarp like.

S.T.A.R. Labs: Team Flash checks out Wally and when it seems he’s fine they all go in on his ass. How you gonna keep these sightings to yourself. He explains this was the first time it got physical. Caitlin wants to run some more tests. Barry is on another level of dictator and tells Wally he’s out of Team Flash for now. Then they want Julian to be their puppet to talk to Savitar but he ain’t wit that.

Caitlin goes in to reassure him she’ll still let him wine and dine her, despite him sounding like a psycho for a few minutes. He kisses her for the first time and squares up. As Julian, Savitar says he actually views The Flash as the big bad villain. It’s the team who made him like this. He’s imprisoned inside the Speed Force and his will alone keeps him alive. He makes Julian stand, as the team tenses up, and tells Iris that he’s sorry it has to be her but it’s kill or be killed. Ever proud Barry obviously boasts that he already trapped him and got rid of the Philospher’s Stone… which Savitar questions before they pull the plug. The team looks shook. I’m just here for HR and his wild ass quotables. “I don’t know if I can take another one of these seances. Anyone else with me? I almost filled my drawers.” LMAOOO Yo! This dude has me crying.

They decide they should probably check in on those acolyte worshipers cuz… evil. These clowns up on some hill in the park worshiping a Savitar statue. Flash comes thru and drops all o’ them fools in one giant lightning-infused punch and snatches up the empty box they were sacrificing.

They inspect the box and figure it must be the same one, cuz Julian and his Indiana Jones swag. In the Speed Lab, Wally is going slower than he should. He’s off and thinks seeing the future will help him save his sister.

Cisco isn’t down but Wally and HR are some persistent bastards. Cisco vibes him there and he sees how it all goes down. He comes back out and runs immediately to Barry, Iris, and the gang upstairs.

BREAK OUT THE VIOLIN MUSIC!!

Wally forces Barry to admit that he proposed to Iris because she doesn’t have a ring on the night she dies. Barry and Iris run off and get deep. Deeper than I care to dive into right now. She’s obviously vexed. He obviously feels salty cuz he thought he was doing the right thing.

In the cut, Caitlin reveals to Julian that she was the one who was predicted to betray the team. She’s been hiding a piece of the Philosopher’s Stone. The team comes up and presses her. She was testing it to get rid of her powers, but has failed repeatedly. They convince Julian to be their human ouija board once again, but not before Julian turns his dick-o-meter to 98 and deads Caitlin.

Caramel Love Nest: Joe goes to visit his babygirl and breaks down how much Barry loves her. She knows, but she still confused and mad.

S.T.A.R. Labs: Julian is hooked back up as Cisco uses his triangulation skills to track where Savitar might be. This was a brief Savitar session, but they got a problem. They tracked him to the whole damn city, so everyone’s throwing around a bunch of confused looks. West Household: Jesse goes to comfort exiled and isolated Wally, who thinks Savitar has some sort of hold on him, since he got his powers from the Philosopher’s Stone. Out of nowhere, Wally sees his mother sitting on the steps. He lookin at her like, “Shheeeeiiiitttt”. His mom tells him to sit his ass down cuz he ain’t fast enough, which makes Wally realize it must be Savitar fucking with him. He jets out of the house, telling Jesse he needs to go stop Savitar himself.

Caramel Love Nest: Barry and Iris have a real ass violin music convo. She tells Barry that she didn’t want him to propose out of fear, but out of love and desire to be her husband. Now, there will always be a part of them that’s tainted. She doesn’t want to be someone that he’s trying to save for eternity. Barry goes all Rain Man on us when he hears the word eternity. His mind ventures off and sees the flashes of light that Cisco sees.

S.T.A.R. Labs: Cisco was looking into his goggles and seeing what Barry saw. Barry pulls up and tells them that was Savitar runnin’ thru the Speed Force. Jesse flashes in and tells them that Wally ran off to stop Savitar. They go up to the top secret Philosopher’s Stone sitting out in the middle of the room, on display with a glowing light underneath it, but what a surprise!! The stone is missing. WHAT DO YOU EXPECT?!? It’s sitting out looking tempting like the Mona Lisa, of course it was gonna get snatched up eventually. Dem Streetz: Wally is baited into running fast enough to open up a portal and tosses the stone into the Speed Force. A rip in space-time opens up so Cisco tells Barry of the surge alert. Flash jets down there just in time to see Wally get sucked into the Speed Force. He stands there looking on in horror, doing a whole bunch of nothing until the Kid Flash chest plate souvenir drops in flames. Savitar soon comes crawling out. Flashpoint gave Savitar a chance. It inspired him to bait Wally and force him to take his spot being stuck in the Speed Force. Then the battle pops off.

Flash makes the first move, as they both go for the jugular. The battle that ensues was pretty damn fire. The least CGI’d Flash vs. Savitar fight and it was official. Savitar talked that shit and challenged Barry to kill if he needs to. They exchanged blows repeatedly, ran through some buildings and punched holes in some brick walls. Savitar tossed Flash’s ass off a damn 12-story building and our boy ate that shit, hopped up and threw some mean lightning speed punches in response. Then out of nowhere, Flash tries to rip Savitar’s mask off because he now thinks there must be someone underneath the hood. Ol Savi flips the script on our hero and stabs him dead in the chest with his 3-foot scythe, but on the right side cuz he can’t die just yet. Barry uses this opportunity to try and change the future some more and cuts off his blade with his vibrating hand of death chop. Savitar runs off to plan his season finale assault.

S.T.A.R. Labs: Barry wakes up after the team all came together to remove the huge hunk of metal blade from his chest. Jesse Martin once again flexes his acting muscles and Joe West makes you feel some actual emotion for losing Wally.

Two Savitar predictions come true in this episode. Caitlin betrayed the team and Wally is now suffering a fate worse than death. Now it’s time for one of ’em to die. Iris, you got next.

Savitar in the non-CGI suit was surprisingly flames!

Did Iris take her ring off at the end of the episode?

Looks like they waited until the end of this season to get into the ‘who is he under the mask’ debate. Wish Savitar really was a God. Who knows, plenty of time left.

Quotes of the Episode:

HR — “You guys can count me out, because I didn’t bring an endless supply of boxers to this planet.”

Caitlin — “Because. I’m the one who betrayed everyone.”

Earth-19 Surprise Bombs Dropped by HR: It’s the Four Amigos on his planets, not three.

Two episodes until the highly anticipated, softest looking episode of The Flash ever. The musical crossover ep with Supergirl. I’m struggling just thinking about recapping it.

Back to the Savitar storyline this episode. The threat of imminent death is heating back up and Savitar is bound to be super ruthless.   Season 3 recaps locked and loaded in the chamber right here.