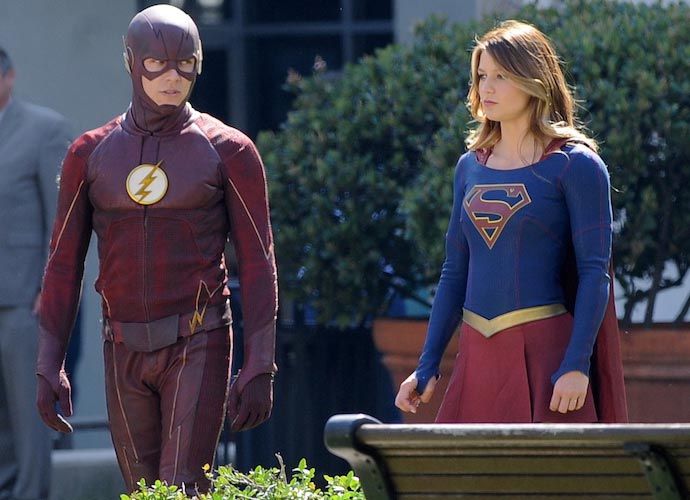 It happened. The Flash mysteriously jumped through the multiverse and wound up in National City, becoming an ally of Supergirl in the process, and nobody walked away from the hour long special asking themselves, “How in the world did they just screw that up?” Yes, that was all types of shade being thrown at the big brothers of DC. Even if you don’t watch Supergirl or The Flash, you can get the jist with this recap I’m ’bout to hit you with.

This entire crossover was insanely organic and not one single scene felt forced or unbalanced. Their initial meeting was, without any better way to put it, cute as hell. I don’t know if this actor and actress have been fine tuning their skills or if they just play off each other amazingly, but it simply felt like they belonged on screen together.

Supergirl, who’s real name is Kara Danvers, got her old co-worker fired and homegirl is not the forgiving type. The ex-employee (who we find out becomes Screaming Banshee) pulls up to Supergirl’s job at CatCo and unleashes a vocal blast that sends Kara through the window of a 30+ story building, plummeting to her would-have-never-happened demise, when the Flash speeds in and saves her from the fall.

[title type=”h2″]Introductions[/title]
Supergirl is confused. “How the hell did National City’s hero just become the damsel in distress? How did this guy in a red lightning suit just save me from that fall?” Barry explains who he is and exactly how his astonishing speed was able to save her. Kara explains why her indestructible body didn’t exactly need saving and they both just kinda stand there baffled at the sight of another super powered hero before them. Their reactions to each other were amazing in all honesty. It’s as if the writers and show runners kept the script from each actor and didn’t let them see each other until they started filming. The perfect scene to describe this was when Kara brought Barry back to meet Supergirl’s team: James, Winn and Alex. They were all skeptical that someone could be just as fast, or faster than Supergirl, and rightfully so. But the look of genuine surprise and elation that Kara exhibits when Barry is gone in .2 seconds and back with ice cream that he places in everyone’s hands is phukin phenomenal.

At the same time, Barry wigs out a bit when Kara and her team reveal that she’s an alien and not some genetically modified human, like all the heroes and villains on The Flash. The grin that Barry breaks out upon hearing that this all-powerful young lady is from another planet was truly cheesin’.

Anyways, I won’t bore you with too many details. Flash has been trying to boost his speed (you know, to defeat that murderesome villain, Zoom) and on this practice run, he ran so fast he accidentally jumped into this parallel universe where Supergirl is alive and defending the innocent on the reg. In exchange for her help to get him back to his world, Supergirl asks Flash to help her get rid of the two bad gals tearing up the city. Flash agrees and they take on Livewire and Screaming Banshee.

The team up starts off a little rocky, with still new to this hero game Supergirl forcing the duo to rush into battle before they can come up with a plan, which results in the partners needing to retreat. Later in the episode, the bad vs good battle goes down once more. Surprisingly, there were no amazing Marvel vs. Capcom tag team finishers like I had hoped, but there were some really fun and impressive moves performed by Supergirl and Flash as they exchanged blows with the lighting lady lord and eardrum killa. Instead, this entire episode wound up being bigger than the both of our heroes put together.

In the end it turned out to be the good citizens of National City that were the true heroes, bringing the evil doers to justice using electricity ‘s ultimate trump card, H20 yo. Supergirl then holds up her end of the bargain and helps Barry jump through a breach back to Earth-1.

Just like that, the disgusting taste that was left in my mouth after sitting through 2 1/2 hrs of a movie I had insane expectations for; these bright, budding TV heroes and a few brave firemen erased the DC disdain I’ve had for the past week. That’s how it’s done folks.

Grade A Nerd Swag: When Barry was running down the list of DC heroes that Supergirl should’ve known, including Green Arrow, White Canary, Firestorm and company was such a genuine scene of inquiry and understanding. Obviously, this may have plenty of future DC implications, but let’s just sit back and enjoy these two as they do work each and every week of their respective 1st and 2nd seasons.

My One Beef: How the hell did Screaming Banshee get electrocuted at the end of the episode? That shit was ridiculous how they just hit her with a ghost Raiden lightning strike just ‘cuz. You’re better than that, writers.

Speedquality For All: The writers made up for that Banshee electrocution though. They had Barry drop that, “Let’s settle this like women” line and it was quite hilarious.

Winn Was on His Cisco Game so hard this episode! I have a feeling that at some point, the tech geeks will have their day in the sun. Catch up on previous Flash recaps here and articles on Supergirl here.