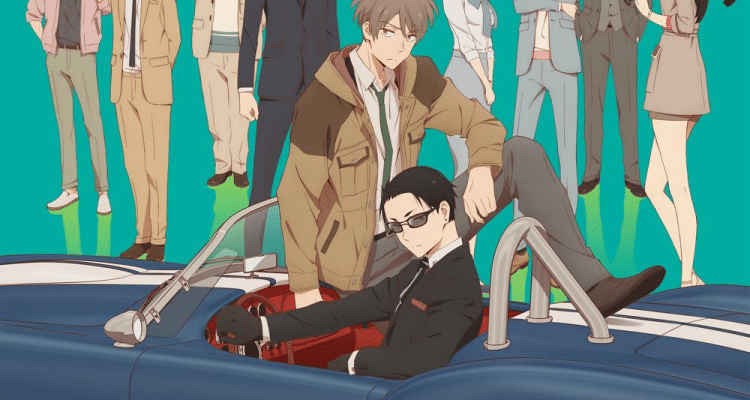 Sleek, sexy, and absolutely outrageous, The Millionaire Detective: Balance Unlimited continues this ride of crime-solving ridiculousness.  Daisuke continues to dive into mischief and mayhem, tethered to the gruff, stern, power-bottom, Haru. Episode 3 is a hostages-on-a-train situation, where we get a closer look into Haru’s traumatic past. Episodes 5 and 6 seem to be the beginning of the overarching plot. The hidden gem here lies in episode 4, the lost dog episode.

Want to know what the REAL crime is? The fact that we are meant to be duped into thinking these two are straight. No. These are two queer, wholesome buddies who will hopefully one day realize that the reason their hearts beat so fast when they’re near each other is because they’re hopelessly in love with one another.

Episode 4 starts off with an annoyed Daisuke, strolling away from an exasperated and desperate Suzue who worries that she’s upset her relative. (Also, this dynamic is super fucking weird and annoying. It’s not cute and is one of the reasons I get taken out of this anime). He gets a ride from the butler to Haru, who wants to help some random kid find his lost puppy. Daisuke realizes he left his phone and wallet behind, which promptly after, shenanigans ensue.

They spend the night together, with Haru teaching Daisuke everyday things; how to grocery shop, how to cut vegetables, what alcohol to consume, and sharing with him the delicious secret recipes of the Katō family. This is the good shit I want in my anime. Handsome men bonding over the audacity of life. My favorite scene has got to be when they cook together, get drunk together, and Haru finds Daisuke in the bathtub the next day, after having slept there the entire night. What speaks to me about this very fun, filler episode, is that it enhances the relationship between our two main leads in a fun and wholesome way that does not raise any stakes. While this episode has a somewhat bittersweet ending for the initial case of the lost puppy, it leaves you feeling that there is a shift in the relationship between these two detectives. This shift will hopefully show us the beginnings of a foundation of respect and trust. This is necessary I think, as we head into what looks like the main plot of this first season.

Episodes 3-6 are decent enough if you watched the first two and liked them; however, episodes 5 and 6 have a slight turn in tone which I personally wasn’t a fan of. The amount of toxic misogyny I witnessed and the genuine discomfort I found myself feeling during these two episodes really took me out of enjoying this anime. I was quickly reminded that while it’s a fun little anime of two quirky cops, it is very much still copaganda. We witness multiple cops utilize underhanded, unethical, and if you’re a woman, downright terrifying methods in order to extract information. There is a whole scene where two cops essentially ambush a woman alone in a parking garage. Daisuke uses his expensive AI to take control of the hi-tech car said woman is driving in order to force her to end up at a specific location for him to frame her for manslaughter to bring her into the station. There is further coercion and manipulation that takes place, and it’s jarring. It reminds me that we are seeing more and more cultural shifts about how we as an audience as people in general want to move away from seeing cops as heroes, even in these dramatic and over-the-top pieces. This kind of nonsense will simply not be tolerated anymore.

Take a look for yourself on Funimation and tell me I’m wrong that this wouldn’t be better as a queer romance.