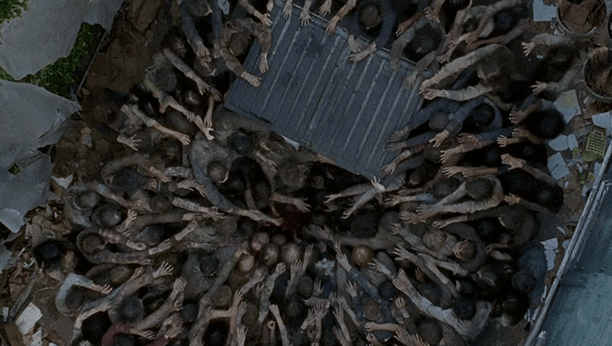 I like Glenn. I particularly like that he’s clearly been doing those biceps curls, but I digress.


[divider type=”space_thin”]
If you have to actually start the episode by re-showing the scene from a different angle to make your bullshit alteration seem even remotely possible, then that should be the first clue that maybe you should abort mission.


[divider type=”space_thin”]
And he’s captain save-an-orphan. Here’s the thing: if I just miraculously survived a herd of walkers thousands deep by doing my best Oscar the Grouch impersonation, I’d be like “Thanks for the water, angsty teen. I’m heading back to Alexandria, you coming? Naw. Okbyegoodluck.”
[divider type=”space_thin”]
Because your family is back in Alexandria. And as much as Maggie annoyed the shit out of me last week for not looking for you after getting all the way down into the sewer, I can kind of understand it. Motherhood is nothing but hard choice after harder choice after oh-fuck-you-universe-you-can’t-be-serious choice. Maggie made a choice in the sewers. I don’t have to be a fan of it to get it, though.

She is also making a choice to stand on that wall (AND behind it) looking for a sign from Glenn; she wants him home, but she’s keeping her kid/bundle of cells safe.

Meanwhile, Glen is out here playing Big Brother to Enid who has a motto he should listen to: Just survive somehow. Clearly Glenn gets that on some level. Nicholas wasn’t the first gut suit he’d worn in the service of his own life. So why now?


[divider type=”space_thin”]
In part, because this season is about the “group.” Who’s in it? Who belongs? Who are you willing to risk your life for?

Morgan is obviously captain of team Everybody. Rick is on the other end of that spectrum: Team Me and Mine; he might be a shift manager at Terminus under different circumstances. Last week, we saw Daryl navigate this. Since arriving in Alexandria and spending time recruiting with Aaron, he’s leaning more towards Team Everybody. Even Michonne tells Rick “We’re here now,” referring to the center of the shitstorm with the Alexandrians.


[divider type=”space_thin”]
So thematically, Glenn’s actions make sense, but as a character it seems… out of character – not because Glenn is Team Me and Mine, but because he’s on Team Maggie and Fetus. And has been all season.

After he asks “What happened in Alexandria?,” Enid says “It was people; you should go.” And she’s right. This bullshit about how his wife would want him to save her is great, but his wife isn’t standing on a wall looking for Enid. His wife didn’t point a gun at his head. He didn’t insist Michonne stay behind when they went out to divert the herd. He owes it to her and this kid they plan on having to get his ass back as fast as possible and if Enid doesn’t want to go, fuck her.

Because Lori isn’t there for Judith. Childbirth is some real shit [shivers, has flashbacks, shakes it off] even today in this mostly-not-apocalyptic world. So in this back to nature, no pain killers, no old women who have seen some shit world, it aint good.


[divider type=”space_thin”]
Maggie may not survive it. And then what, Glenn? What team will you be on then?