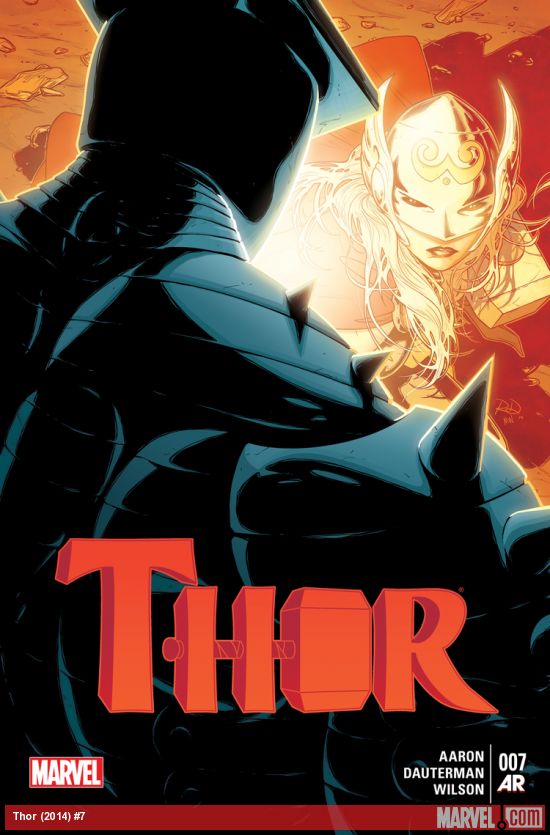 I’m assuming that if you’re reading this review, you’re either a). undecided on whether or not Thor is worth your time or b). decided that it’s worth your time and are coming here to see if we here at Black Nerd problem are in agreement. Well, if you’re in either of these columns, you haven’t been reading my previous reviews so shame on you right off the muscle. But it also means that those of you in the A column can get off the fence. This book unequivocally rocks.

This week, our Goddess of Thunder is squaring off against The Destroyer and the massive armor, driven by Odin’s sinister brother, is giving our hammer holding hero a handful. Meanwhile, as the Odinson makes his rounds throughout Midgard, searching for answers, Malekith and Dario Agger begin the next phase in their dark alliance. There is plenty to like about this book, plotwise, but Issue #7 comes with two wonderful treats that outdo all others. The first is Thor’s epic throwdown with the Destroyer. One thing the trolls have complained about is that the new female Thor hasn’t had any worthy opponents (never mind that Absorbing Man has held his own against the Hulk). They’ve got to shut up this week. Aaron has crafted a wonderful conflict truly worthy of a Thor book with an ending that leaves readers drooling for one more round for these titans.

The second is the flashback that tells the “Whatever Happened To…?” story of one of the candidates on Odinson’s “Who Holds The Hammer” list. First of all, it says a lot about this particular character, reminding us how fun they were during Aaron’s “God of Thunder” series. Second, it’s always nice to have a cameo appearance from Phil Coulson. Visually, this is Russell Dauterman at the top of his game. From the grandeur of Asgard to the vile wasteland of Roxxon Island and the wonder of Alfheim, Dauterman’s unique brand of whimsy and detail practically reaches out, grabs your hand and turns the pages for you, offering a brutal, visceral battle where you almost feel every impact.