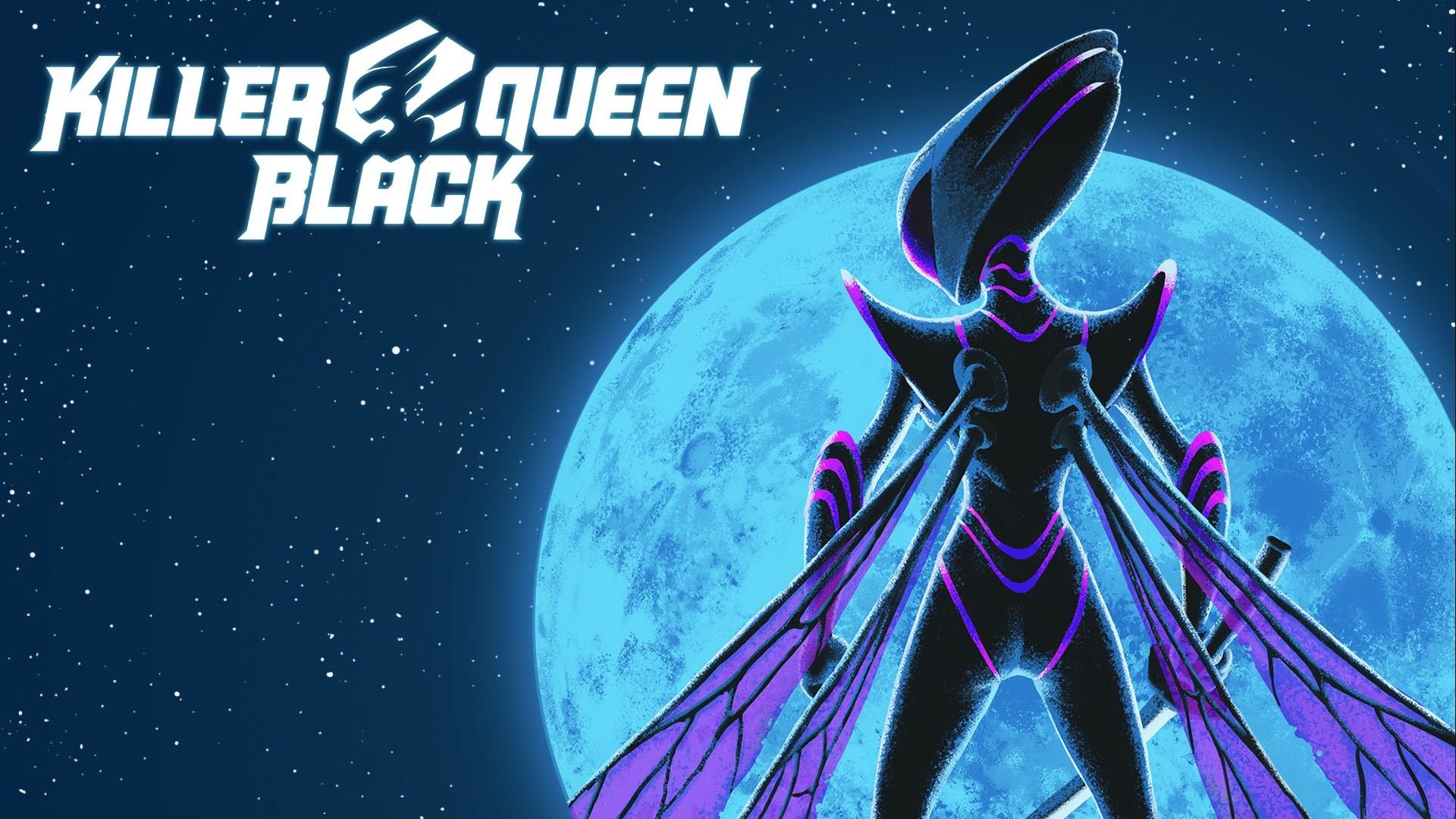 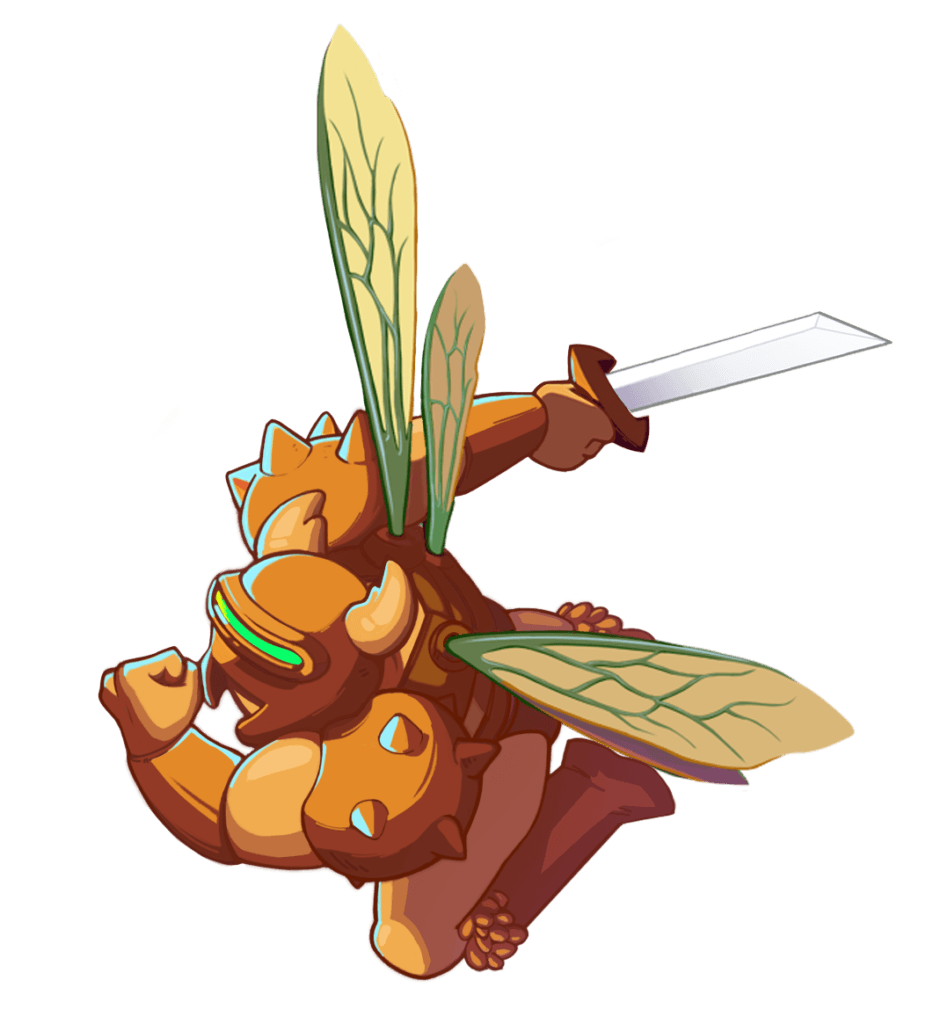 I am part of a generation of gamers whose persuasion of gaming solely existed through home electronics and personal devices. Whether it’s been my trusty GameBoy Pocket, my PS4, or my newly purchased gaming laptop, I mostly experience games in the comfort of my home on my couch or in my den of computer cords, sprawling like kudzu connecting various things. However, I have always had a fascination with arcade cabinets. Perhaps it stems from the weird 1989 movie, The Wizard, or a more general appreciation for the complex circuitry and artistry involved in their creation. Or maybe, it’s simply because arcade cabinets represent the fundamental joy of playing with people.

And one of my recent interactions with arcade happened a few years back when I went to an arcade bar in downtown St. Louis and happened upon this behemoth of a gaming cabinet: Killer Queen. Two teams of five, consisting of one queen and four worker bees, go head-to-head in a wild competition. I tried playing with my friends and a group of people who were also intrigued by the novel game, but we weren’t able to get the full ten. I left that night thinking, “Wow, I’d play this game so much if I could.” 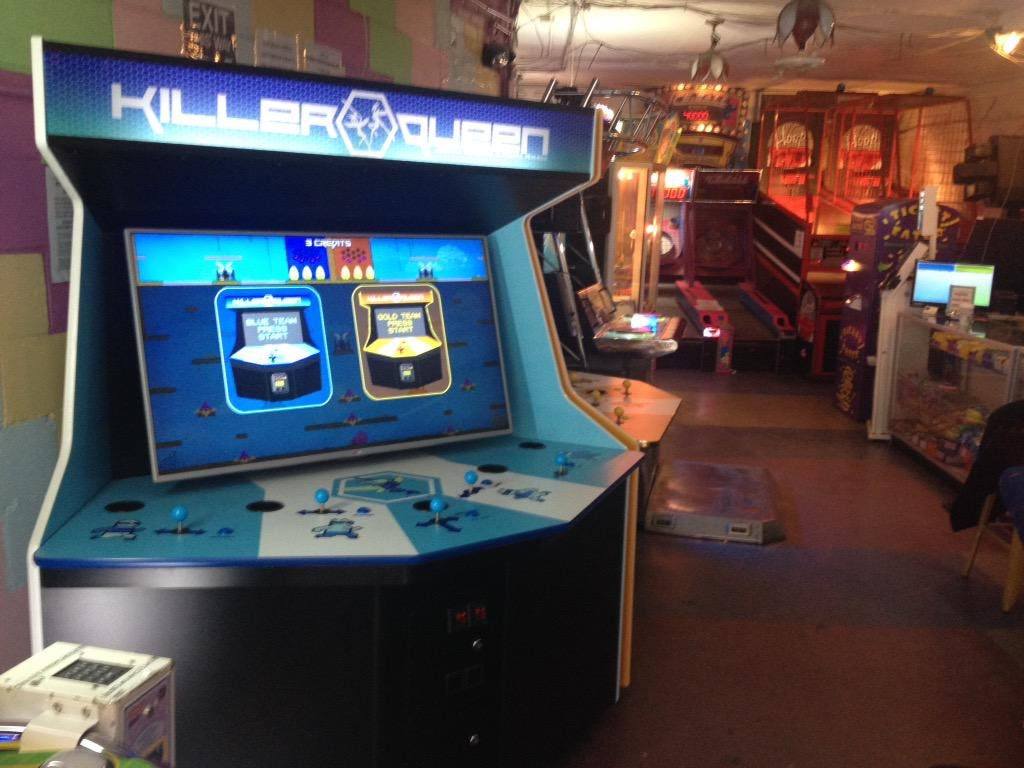 Flash forward to now, and that dream is now a tangible reality with the release of Killer Queen Black on Steam and the Nintendo Switch, and wow I’m so happy that it is.

Killer Queen Black by Liquid Bit studios is the home version of the base Killer Queen, with a couple notable changes. The chaos has been reduced by exactly 20%, since the game has been altered to become a 4v4 affair with one queen and three workers. It is still a mess of hectic chaos that I absolutely adore. 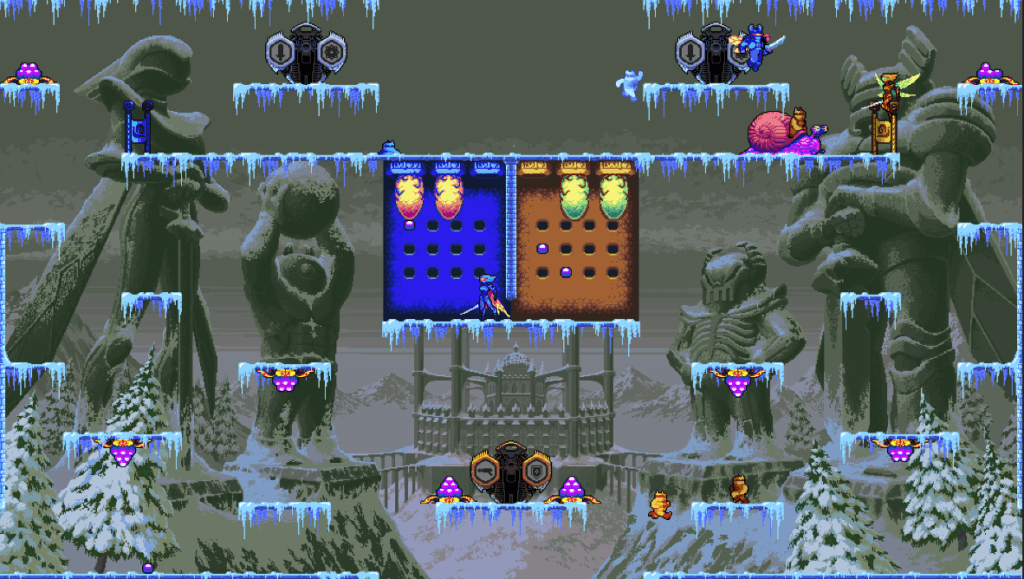 There are three paths to victory in Killer Queen Black: Economic, Military, and Snail. Your team has to coordinate strategies and navigate on the fly as you try to collect berries, kill the enemy Queen, or ride a snail to the finish line as a thousand things are going on around you. Much like chess, the Queen is the most powerful character on the board. She is the main offensive unit, able to kill other players, and tag gates specifically for her team. Workers are around to collect berries to either fill up the Hive’s stockpile or use at gates to become solider bees or get speed/health buffs. They are also the only unit that can ride the slow, patient snail victory. 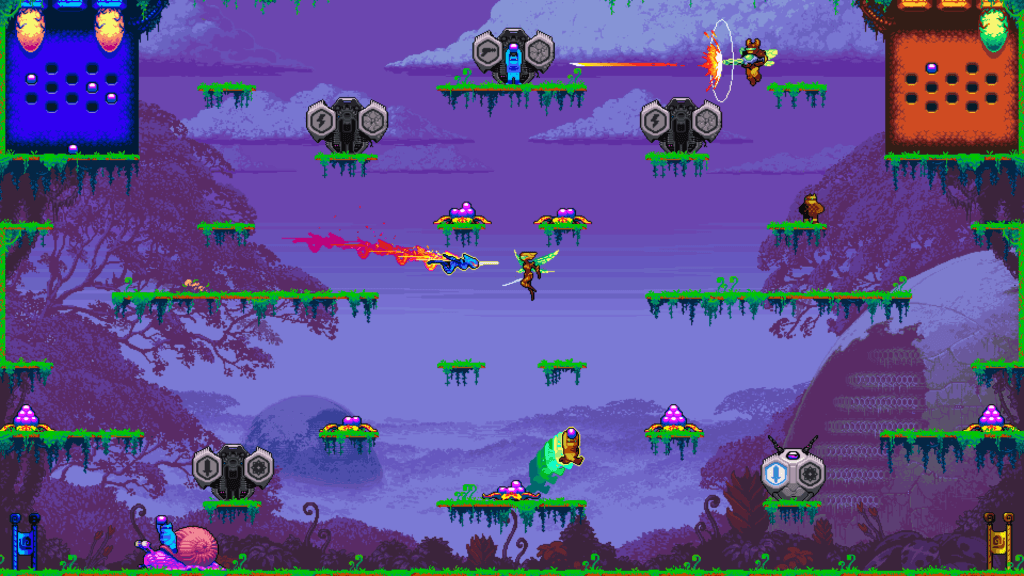 Learning along the way

If that sounds like a lot, don’t fret too much. Killer Queen Black features an excellent tutorial that walks you through the three paths of victory and basics of control. In less than 30 minutes, you can gain the foundational skills to play the game with ease. And then you can spend the next few hours learning the nuance of various strategies, on-the-fly calls, and just trying to get better in these short bursts of game.

Games happen in best-of-five, with a pseudo role queue that lets you select if you would rather be a worker or Queen. You can then change your visual aesthetic (slightly) so you can quickly identify yourself in all of the brightly colored business of the game. A certain selection of predetermined arenas populate the list. If you want to just play the game to pass sometime, you have a Quickplay mode where you’ll be matched with people online just to have fun with it. If you want to better your skills, there’s a competitive queue with placement matches and ranks. And if you have friends, you can set up custom games. It’s pretty much every feature you want in the home version of an arcade game. 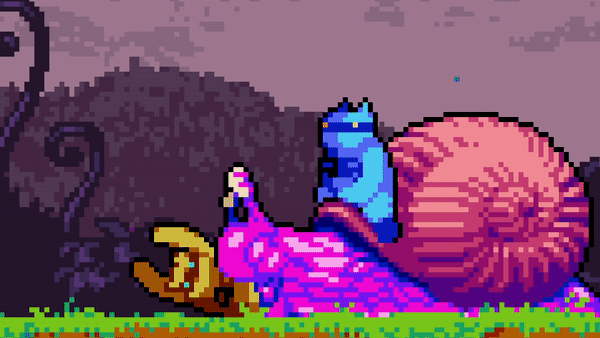 I played this game on Steam, and the keyboard controls were very intuitive, and I imagine that it will translate well to the Switch’s joy-cons – although I can not personally attest to that at the moment. That said, I am more than capable of extolling how much fun there is in the game and how high of a skill ceiling there is to the game. In the couple hours I spent in custom matches and quickplay, I realized that:

But each realization was fun and made me want to play more. Various victory paths were all entangled in each of the matches. Sometimes having a player on the snail would panic the queen making it easy to get that final blow. One of the maps had berries right by the spawn point, and I positioned myself to start there and just started throwing into the Hive and got a head start on an economic victory. My favorite win was a last minute ricochet right as I saw the enemy Queen get dangerously close to mine. It was great. I ended up liking the worker the best given the versatility it had on the game state, but I’ll admit there was a great power fantasy playing the Queen. Still not sure I like being a soldier, but maybe more time will convince me otherwise. 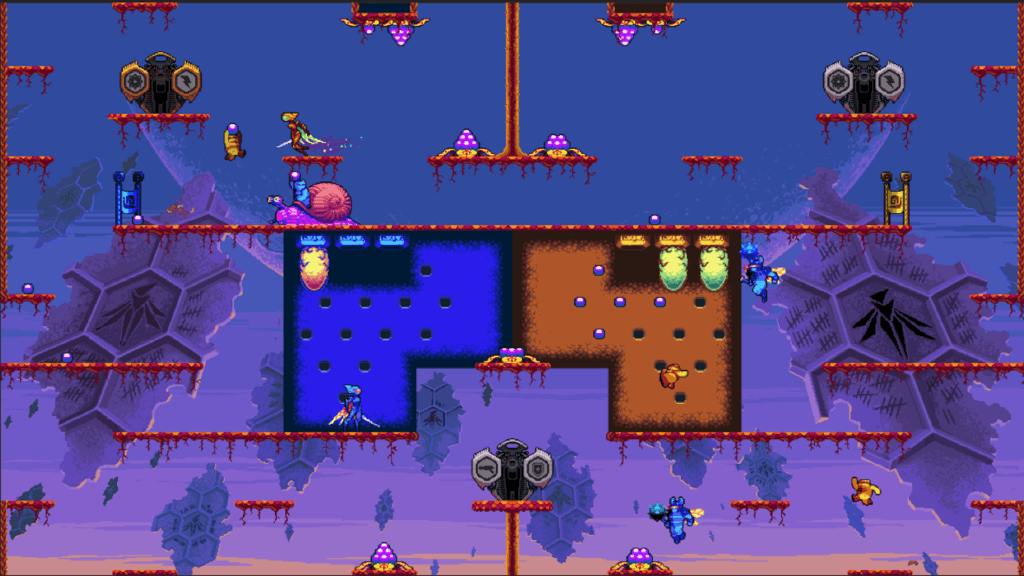 Bee-utification of Mechanics and Visuals

Outside of the mechanical brilliance of the game, the art direction and sound is equally beautiful. The maps have gorgeous backdrops, the animations give each bee a surprising amount of personality. It feels like a proper arcade experience. I can’t wait to play this game with people at my house and online just to enjoy the flurry of bees moving across the screen.

Liquid Bit has created a fantastic arcade experience with Killer Queen Black at $19.99 (digital) and $29.99 (physical) price, this game is a steal. It’s enough to warrant the purchase for an individual who just needs short bursts of arcade shenanigans and demand a purchase if you love party games. 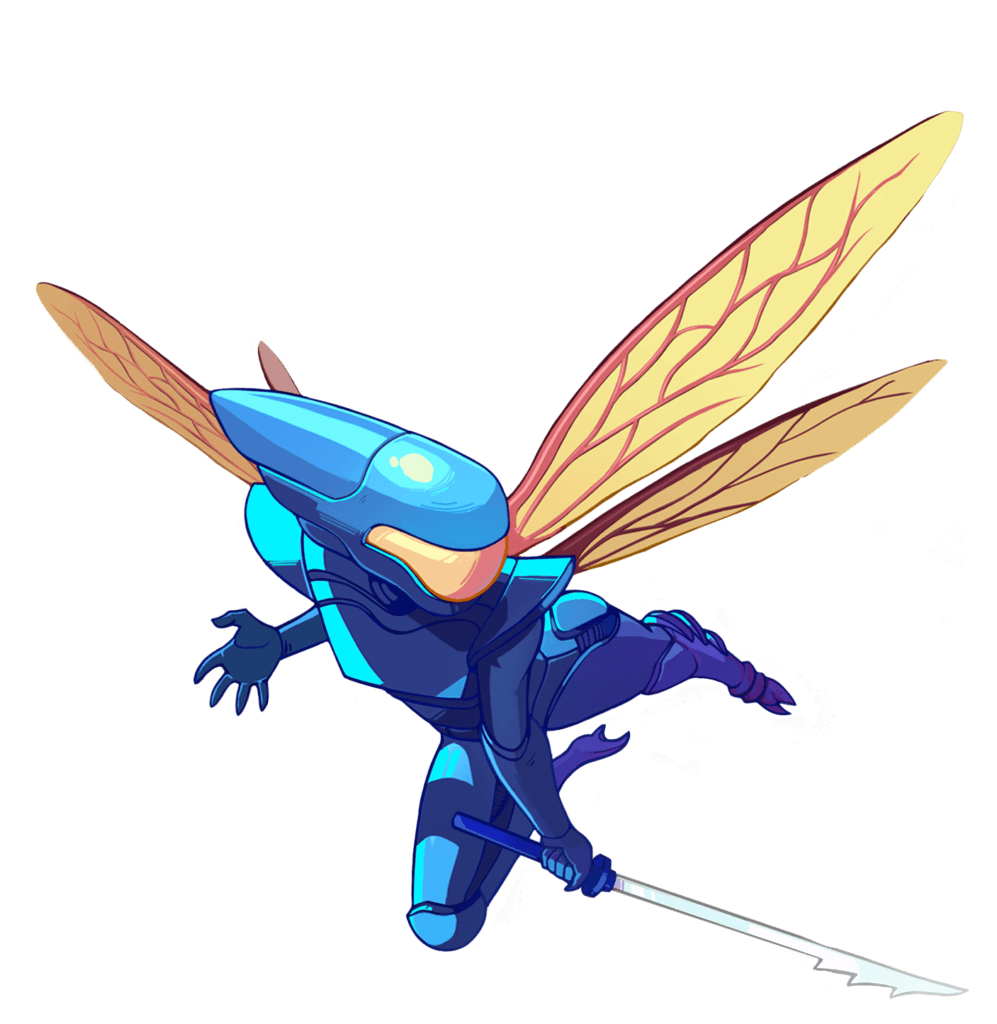