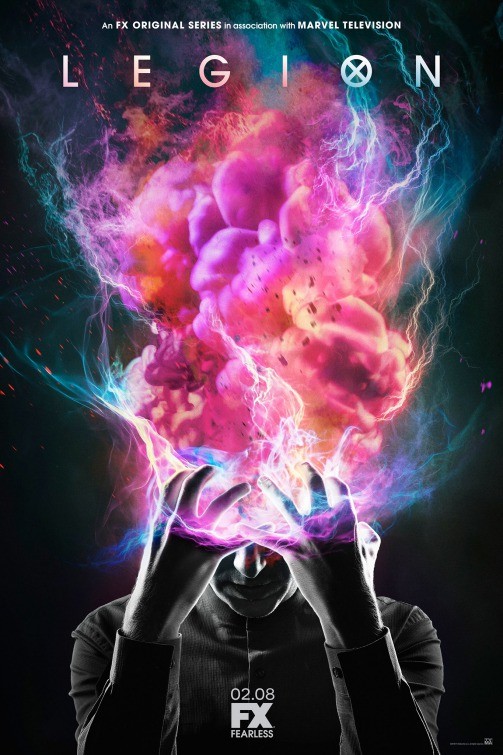 Legion has transformed from this suspicious shot in the dark into a bonafide 2017 X-Men hit. I know, it’s hard to believe. I’m guessing it was even harder to believe back when Noah Hawley (Fargo) and his team were crafting this world for the FX Network. And it really is its own world, more so than an X-Men world. The setting feels bleak and hopeless. There is no school for gifted youngsters sending in a team to save anybody round these parts. It’s kill or be killed out in these Legion streets. If you took One Flew Over The Cuckoo’s Nest and infused a little Heroes into it, with a sprinkle of Clockwork Orange and Trainspotting, this is the product of said cinematic orgy. The show is centered around our mentally unstable main character, David Haller. All real deal X-Men fans will know that he’s the mutant son of Charles Xavier aka Professor X, so he’s a powerful mutant. Like an omega power level mutant. One who has no idea how powerful he truly is, or any clue how to control such power. Therein lies the genius dilemma that Legion explores so bravely. How do you tell the story of a schizophrenic, hijacked, and brainwashed mutant with the capabilities to be nicknamed “World Breaker”?

The pride and joy of Legion is and (hopefully) will always be its superb take on what goes on in David’s mind. Schizophrenic individuals have a lot going on in their heads (understatement of the year) so it was only right that the writers and creators pay homage to the frantic, frightening mentality of someone who was diagnosed at an early age and has been hopping through hospitals since his teenage days. This is the realm where Legion is able to remove its inaugural season shackles and dive headfirst into the trippy, complex, colorfully layered scenes that will warp your understanding of how far out a show can be, while remaining grounded in its truth.

David’s convoluted story alone will keep you coming back for more of this top notch filmmaking, almost as impressively as Elliot on Mr. Robot. Yes Rami Malek just won an Emmy for his role as Elliot. No, I’m not saying this show is quite on that level, but I am making the comparison so do what you will with that! Hawley must’ve been taking the ill Cornell notes on Sam Esmail’s approach on Mr. Robot, because he takes the “unreliable narrator” approach and ramps that shit up to 1,000 for David. Don’t believe everything you see. The reason to justify said skepticism? That brings us to the next portion of our regularly scheduled programming…

There is something intricate and engrossing about the bad guys in Legion. From episode 1, you see glimpses of the Yellow Eyed Devil, our arch nemesis in Season 1. You hear rumors of the faction that opposes our team of “heroes”. You question friends, new encounters, and people in power at every turn because you quite simply have no clue how deep this evil goes. David’s own mind is working against the man, so you really have to take everything with a grain of salt and by seasons end it’ll all make sense. Oh, and can I give a huge shout out to Aubrey Plaza for the Lucifer’s WORK she put in for this show?! Who knew the funny ass Parks and Rec alumnae could dial up the inner demon in herself to portray one of the greatest inner demons in superhero TV history? I for one, had no clue what to expect from her casting, but was thoroughly pleased with her role in the mutant melancholy that sets Legion apart from most comic book adaptations.

Without giving too much away, there is one looming villain throughout the entire season, but it’s SUCH A MIND FUCK that you have to wonder who this mutant could possibly be. I love The Flash, but I appreciated this season long arc and reveal so much more than the villain of the week approach that the Scarlet Speedster deals with each time he vanquishes a new rogue. And the big bad of the season is not the only shade of villainy David and the crew has to deal with. Oh no, we got government agencies with wild resources looking to capture or kill men with the kind of power possessed by our titular character. Lookout for that curly haired creep too. He’s a problem.

Legion is set in Marvel’s X-Men universe so it’s a pleasure watching each new mutant emerge, all with different powers and limitations. David, the psychic, has telepathic, telekenetic, transportational, and R’Hllor knows how many other powers. I say that seriously, nobody really knows how much power or how many powers David truly has, so even at the season’s end you’re left wondering and wanting for more.

Cyd, our lead woman on the show has mysterious mind-swapping powers (mad Ino/Yamanaka clan Mind Transfer Jutsu). One finger graze or swipe could lead down a dangerous path, so that eliminates her ability to touch or have any sort of an intimate relationship. That. Shit. SUCKS.

We got our one brotha in Legion, Ptonomy holding it down, played by actor Jeremy Harris. He’s a memory artist who remembers everything (I’m talmbout poppin-out-the-womb remembers everything), and has the ability to take people back into their own memories. He is one of the most important members of the Summerland team, as he helps David get into his mind and clear up a lifetime of confusion.

Cary and Kerry Loudermilk are the anatomy-splitting fraternal Siamese twins. One of the wildest powers I’ve ever seen. Cary is a middle-aged mutant scientist. He was one of the founding faculty members of Summerland, the show’s main location, following the psychiatric hospital. Kerry is a savant who lives inside him, but comes out to play when it’s time to get buck nasty. They don’t want it with baby Chun Li.

Legion has become a bonafide hit as the first live-action X-Men show to really impress critics and purists, alike. It is chaotic, eye popping, courageous, and creepstatic. Every single episode gives you something new to explore and more to process. Legion is definitely not your average mutant focused, power having show, but it is one that took an extremely difficult origin story and turned it into an astounding branch of the X-Men universe.

I got 1 major beef with this show. Your. Fighting. Scenes. TRASH! We really need to step up the hand-to-hand combat and choreography game. Legion out here with a perfect score for every aspect of this show except one. Puttin them mufuckin PAWS on people.

Shout out to the Visual FX team. Ya’ll got this show lookin like a 100 million dollar movie!

How they gonna hit us with those low key hints and that slight image of Professor X’s wheelchair? Give us David’s pop dukes!

David’s love interest is named after Roger “Syd” Barrett of the rock band Pink Floyd, whose music was an important influence on the series for Hawley.

In the comics, David really does have multiple personality disorder. This is what gives him his powers; all these different personalities with different capabilities. I wonder if we will get that version of David in Season 2.