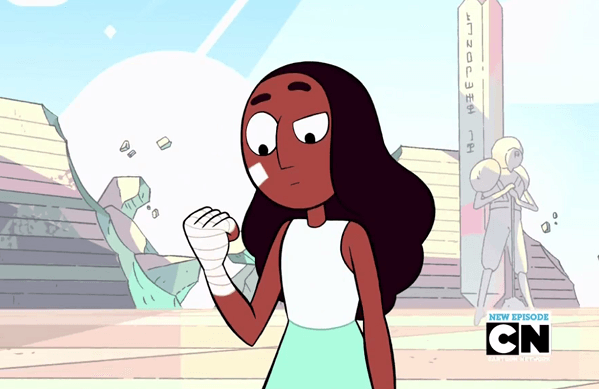 Steven Universe ain’t your average cartoon show. We got the crystal gems teaching Steven about his history as well as teaching the viewers about consent, breaking gender stereotypes, relationships, and everything progressive under the sun. We’ve seen the gems and Steven in action, however, there is one person that’s been leveling up for the longest, and although she is only a a human, that’s not stopping her from becoming a monster.

Enter Connie Maheswaran. We’ve seen this girl’s potential, loyalty, intellect, and sense of adventure grow with ever cameo and appearance. As of the episode “Sworn to The Sword,” we see Connie is going to be playing a role in the war to come with the invading gems. That was the final signal needed to let it be known that Connie just got drafted to Top 5 Dead Or Alive.

Connie is one of a multitude of diverse characters from Steven Universe. We know she is Indian and that her last name translates as “Lord of The Universe” (Translation is Hindi /Surname is Tamil). With a last name meaning Lord of the Universe you know damn well that’s major foreshadowing. We’ve seen Connie in the thick of things ever since day one of her appearance. She a woman of color that been on the forefront of repping her set. Although Connie has stated that she doesn’t want to be a burden, whenever she has been on an adventure she has been a big help either physically or strategically.

Connie is way more than just the best friend (love interest) for Steven — she is his confidant and partner in anti-crime. Connie was is an introvert and didn’t have any friends due to moving around so much, but after becoming friends with Steven we see how hard she rides for loyalty.

Connie is freaking brilliant. We’ve seen hints that she knows some Japanese, she is well-read and quick on her feet. Connie is obedient but will find loopholes to justify actions towards her desired goal. We’ve seen that when danger is present she is able to assess the situation and respond accordingly (physically guiding Stephen in fighting with Rose’s sword) as well as being extremely observational and analytical of her surroundings, as displayed when in Rose’s armory she noticed certain pokes to Steven’s body activated different chambers of the room.

Connie knows fencing as well as being able to play the violin. Connie is able to pick things up pretty quickly and is very mature for her age, as interactions with the Crystal Gems and their enemies require a level head that Connie has proven she has.

One of the best things about Connie is that she is a huge fangirl and nerd. She and Kamala Khan should start a book club at this point. Connie is a die-hard nerd — we saw it with her love for fiction, especially the book “The Spirit Morph Saga“. She has the whole series and introduces Steven to it as well. You know she’s a nerd because she gotta share the wealth so she has someone to talk to about it with. We even get to see her do some cosplay. 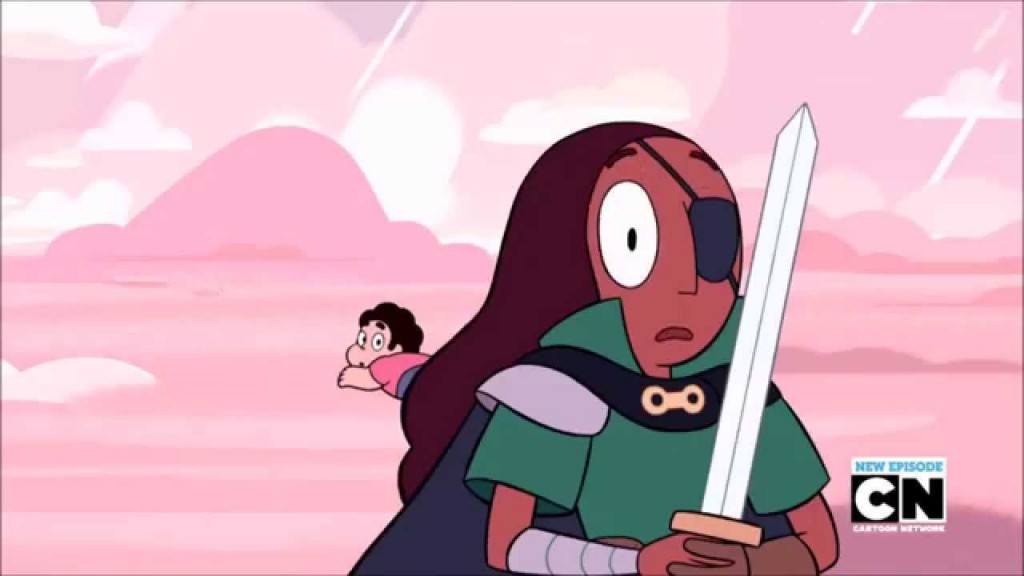 4) “Male Or Female, It Make No Difference,
I Stop The World, World Stop…Carry on”

Connie incidentally helped Steven complete the fusion becoming the first time a human ever fused with a gem. The result was Stevonnie not a fusion, human, woman, or man, but an experience (as Garnet stated). This was a break away from gender norms as we see Connie and Steven interacting (which looks like Stevonnie talking aloud) as to what the other wants. The question isn’t the sexuality of Stevonie but the experience of them. What is this experience like for these two, how are they navigating through it?

This experience made Steven and Connie closer as a partnership (relationship) while at the same time displaying the importance of getting to know your own body, wants, and needs and not having to be ashamed for what you feel or who you are. Rebecca Sugar has commented upon how this fusion between the two represents puberty and changing into another person but remaining the same, while others may treat you differently based upon your growth. We see so much of youth going towards those awkward teenage years into discovering who you are. Stevonnnie is Connie and Steven discovering who they are together as one.

I mentioned before that Connie knows some fencing but recently she went under Pearl’s tutelage in the art of sword play. Maaaaaaaaaaaaaaaaaaaaaaan, if y’all don’t listen when I tell you that Connie went fucking Rock Lee in the training regimen for sword play! Pearl put Connie through some shit that would make Syrio Forel say “God Damn!” She was getting callouses, scrapes from getting her agility up, and Pearl tapped up her wrists on some Palpatine “Good…..Gooood! Let the Fleek flow through you” shit. Where that Meek Mill beat at, I need it for the rest of the post because Pearl went and turned that girl Connie into a Monster!

Oh your eyes don’t deceive you, Connie is rocking the muh fucking Gohan Namek outfit (or a Kalaripayattu outfit). MUTHA FUCKA PAY HOMAGE! What the fuck are we talking though!? That’s what I’m talking about. Pearl straight up recognized fucking game and said, “Nah homie, you done earned this new training Under Super Saiyain Armor.” Connie is not only brilliant, nerdy, ambidextrous and obedient with a hint of rebelliousness, but the girl is a fucking soldier too. She gets to a point where she is ready to put her life on the line for Steven when the time comes. That’s fucking Loyalty, what the fuck y’all know about that? Steven had to tell Connie she is more than a soldier/protector, she is his god damn tag-team partner. Connie then realizes it is stronger to fight with someone than to just fight the battle for them.

We see once again that once Connie and Steven team up? All hell breaks loose. Let me repeat that cause y’all don’t hear me — Connie and Steven turned the training grounds into an ECW in the Hammerstein Ball room and went straight up Eliminators on Pearl to prove their method of fighting together (Steven on shield defense, Connie on sword offense) was more than enough to put on the invading gems.

Connie straight up did the ultimate cross over on Pearl. After someone gives you the fucking business like that you gotta reassess some things in your life. Pearl agrees that their method of fighting as a unit is the correct one and knights both of them. Connie just about unlocked that Bushido Blade trophy. Usually in shows with continuous action once the danger becomes more imminent we start to see the supporting characters riding the pine. That isn’t the case with Connie, she is purely human and going against beings way more powerful than here but she is learning to fight.

We don’t see that displayed often enough in shows, Rebecca Sugar has Connie getting layers of character development and we come to learn that the development doesn’t stop there and spills over into her fighting skills as well. Connie can not only fight independently but as a unit in sync with her teammates. Look, all I’m trying to say is Connie better be an unlockable character in the next Soul Calibur.

In closing let’s just respect how much Connie “Too Trill For Fiction” Maheswaran rocks. She is down to help out in a not only a fight but a freaking war with aliens. She is willing to go through whatever is necessary physically or mentally in order to be an asset and she is just a great, empathetic, stern and awesome person to be around. We’ve seen Connie go from the timid girl that just wanted to make friends with strict parents into an entirely different well-rounded character.

We’ve seen Connie character development from the ground up and one of the most important viewers of this is not only us but her Mother as well. Connie had to disobey her mother in order to protect her and it is there where Dr. Priyanka Maheswaran has to accept that her child isn’t the little girl that needed to be protected so strictly anymore. Connie had to show mom dukes (in the words of Wale) what the problem is, that She’s on top of her game and it’s time for her moms to acknowledge it.

Whenever Connie steps in there’s that piece of you inside that squeals “Yaaaaaaaaaaaaaaaaaassssss” whenever she speaks. And here’s the thing — there still so much more that we’re going to get to see from her in the show. Connie has mos def proved herself as not only a friend, but as an ally that’s down for the throw down. She is there for Steven in numerous ways not only as a listener but as a comrade in arms. You can’t tell anything different cause Connie is that friend you don’t only want but need to have in your corner. 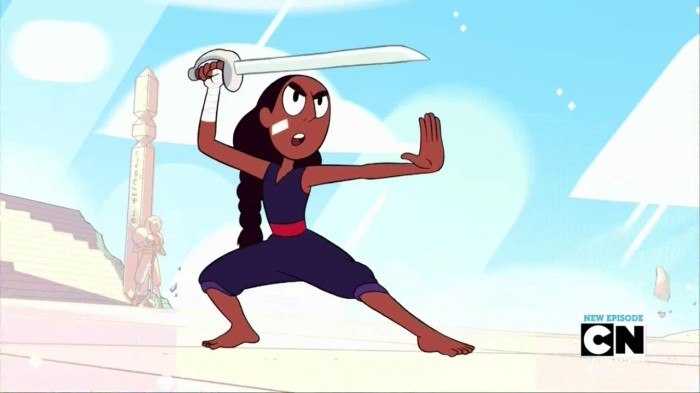