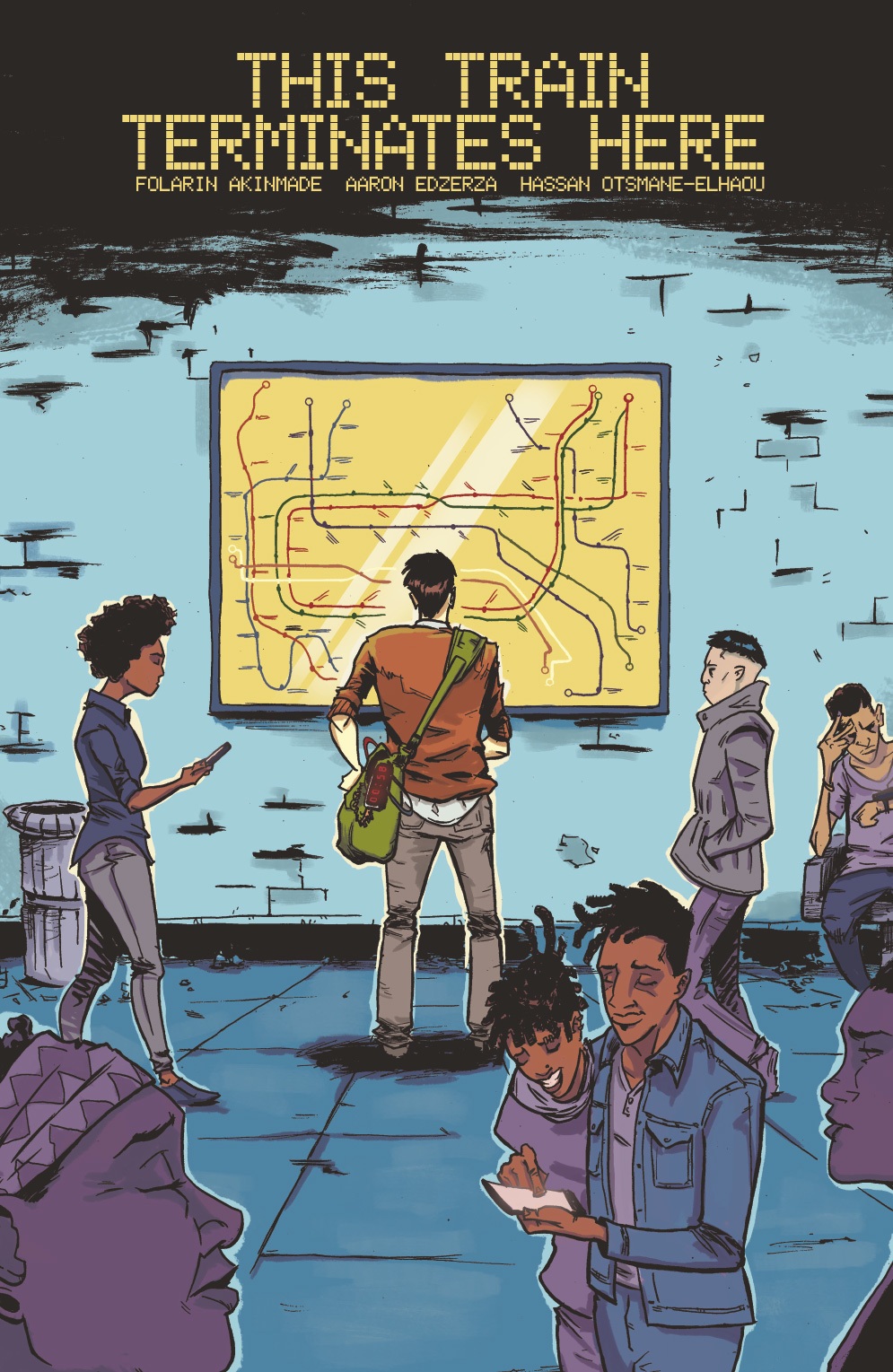 I spoke with South London based writer Folarin Akinmade about his new webcomic This Train Terminates Here, a high concept political thriller with time travel in just ten pages! This is Folarin’s first comic, but I think it’s a strong first step into the medium. He manages to juggle strong messages and high stakes with genuine character moments in a way that conveys his knowledge of the craft. Anyone looking to break into comics, Folarin’s insight from the story’s inception, to assembling his creative team, to crossing the finish line on a project will definitely inspire.

Folarin: Two things. The first, the fact that your only real constraint is your imagination and not wanting to incur the undying wrath of your artist. The second thing is the form itself. Like, there is so much fun to be had with panels as a narrative device. Or the soft reset you get on every page turn. Or the way you can use coloring and lettering to tell a story. It’s an incredibly rich medium.

M: What was the first comic you remember reading that let you know that this was something you could do?

F: It wasn’t so much a comic that let me know I could do comics, so much as a pair of comics that broke my brain, and made it clear that I would live permanently in regret if I didn’t try my hand at writing. I read Warren Ellis and John Cassaday’s Planetary Omnibus, then the first omnibus of Brian K. Vaughn and Fiona Staples’ Saga, back to back. I started reading comics when I was about 9, so by that point I’d been an avid reader for over a decade, but those books were so mind-bogglingly excellent that — after taking some time to freak out — I sort of went “I’m not sure I’ll ever be able to do anything even half as good as either of these, but I think it would make me very happy to spend the rest of my life trying”. Started writing my first comic – a project I’m still working on – a couple of days later.

M: Give me an elevator pitch for This Train Terminates Here.

F: You know when you’re on the train and someone sits too close? Then reveals they know all about your plot to overthrow the government using a highly trained black ops team?  This is a story about that. Also, time travel.

M: Where did the idea come from?

F: So, this started out as an idea a friend of mine had. The basic premise was “an elite team must protect their tyrant of a leader from time-traveling assassins. Shenanigans ensue”. The thing that really inspired me while developing the idea and writing the script was, firstly, the Orientalist lens through which Western powers view certain leaders, particularly ones they deem to be a threat to their hegemony, and how that influences their foreign policy. Secondly, the idea of who gets to write history. These are pretty big themes to squeeze into so few pages, but hopefully I managed to get a few notes of them in there.

M: I definitely think those are prevalent themes. What would you say allowed you to convey them so effectively?

F: I think it all hinges on the fact that I’ve got the protagonist and antagonist — if we can call them that — having a pretty casual chat on a train. It’s an image that was in my head from the beginning and serves the story well because it frames the action nicely, providing necessary context and also giving a lot of weight to the conflict. At the end of the day, it’s a clash of ideologies that we’re witnessing and having that play out in conversation over the course of a train journey while hyper-violence occurs elsewhere helps to cram a lot into only a few pages.

M: Was there a particular reason you chose a train as opposed to other forms of commuter transportation?

F: I could say that I like the metaphor the tracks represent. The idea that we are moving inexorably towards one point, and any attempt to derail that progression is futile. That this perfectly mirrors the pointlessness of John’s cause. But, to be honest, I think I just like trains.

M: How did you and your creative team wind up together?

F: We’re a real product of the digital age, having never actually met. I’d been following Hassan Otsmane-Elhaoue’s work for a while. If you’re after incredibly insightful comics criticism, you needn’t look further than Panel x Panel, his Eisner-nominated digital comic magazine, and Strip Panel Naked, his comics analysis Youtube channel. So when I was looking for an editor and letterer, he was the clear choice. Aaron Edzerza required a bit more digging. I’d been scouring the internet looking for the right artist and came across some samples that he’d posted to a submissions page, and it was love at first sight.

M: Tell me a bit about your characters and the inspiration behind them.

F: The original idea was for a much longer series, so every character was designed around an archetype for a very specific narrative function. Like, we knew we needed a lovable sophisticated rogue, and that’s where Charles started. Very much inspired by old-school Bond. We also felt we needed a professor type to guide us through the mechanics of the weird sci-fi stuff, which was Abi’s origin. 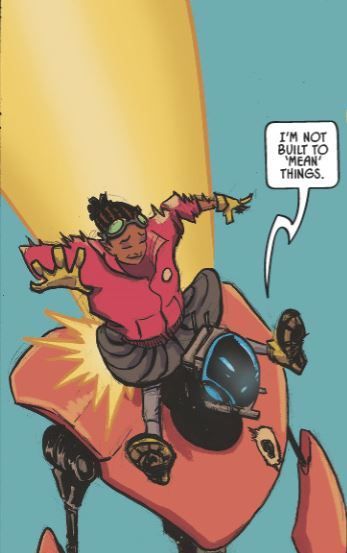 She started off as a cantankerous old man, as per genre convention, but it seemed much more interesting to have her be a young girl. Robot was because we needed a ‘Heavy’ and the idea of a robot who, rather than desperately wanting to be more human, considers their humanity to be a burden just makes me very, very happy.

M: Once you got the ball rolling, how collaborative was the process? Was it pretty fluid or more like an assembly line?

F: I would say it was pretty fluid. From the first jam session that Carl, Christian and I had to build on Carl’s initial notes, to working with Hassan on developing the script, and shooting e-mails back and forth with Aaron about character designs, and background elements, it was all very collaborative. Which is easy when you find talented individuals and trust them to do their thing.

M: How many drafts did it take before you considered it finished?

F: Mmm. I would say there were 3 major drafts or iterations, with innumerable minor revisions to each of those before we got it done.

F: Well, I definitely hope anyone who likes comics, and even some people who don’t, will be able to enjoy it. But it’s definitely not an accident that two of the main characters are black. Like a lot of black nerds, I still have very vivid memories of desperately loving comics and cartoons and wishing there were more characters who looked like me in them. So, I’m really hoping it resonates with black audiences and that they see something of themselves in it.

M: What was your favorite part of the process?

F: Getting art back from the artist. It’s a cliché, but it’s a cliché for a reason. Seeing all your mad thoughts pulled together in beautiful art is just *Chef’s Kiss*

M: Authorial and artist intent don’t necessarily need to be in the conversation in relation to audience reaction, but what are two main things, be it themes, messages, warnings, etc, that you hope reaches your readers the most?

F: I think the main one would be that there are multiple sides to every story and that you have to take into consideration the balance of power when considering them. Certain sides will be invested in one narrative being predominant and it’s worth interrogating why, and what they gain. Also, nihilistic robots are great.

If you have commitment issues, this is the perfect comic for you. You can jump in and jump out in just 10 short pages! If any of this interview peaked your interest, consider picking up This Train Terminates Here here.

You know when you’re on the train and someone sits too close? Then reveals they know all about your plot to overthrow the government using a highly trained black ops team?

This is a story about that.