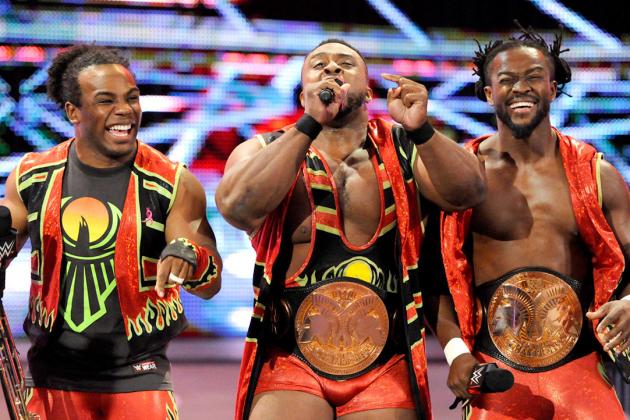 If you haven’t been checking for WWE over the past year-plus, you’ve been depriving yourself of some truly glorious entertainment that you won’t be able to find anywhere else in the world. I’m not talking about the Women’s Revolution or the complete influx of new and fresh talent on the roster – while both have been great for the promotion.

The New Day, a three-man tag team comprised of professional wrestlers Kofi Kingston, Big E and Xavier Woods, has been the most consistently great thing WWE has produced over the past year. From a wrestling standpoint, they’ve proven on multiple occasions that they can more than hold the belts with their in-ring abilities.

Kingston may be one of the most athletic guys on the entire roster – just check his many Royal Rumble saves. Big E is insanely strong and so massive that I’m convinced he hasn’t worn a necktie since 2007. And Woods has a natural understanding of what it takes to get a reaction from the crowd, in either cheers or boos. He can often be found standing next to the ring during matches playing his trombone, Franchesca II [R.I.P. Franchesca I], to the rhythm of his teammates stomping out opponents.

But their in-ring work isn’t enough to make The New Day the best thing in WWE, week-in and week-out. As three black wrestlers that appear to have ultimate creative control over their characters, they’re something wrestling fans haven’t quite seen before. This is the same company that just inducted the conductor of the “Hoe Train,” a prison guard and a cowboy into the WWE Hall of Fame, after all.

If you listen carefully, you can hear “What are thoooooose?!?!” scattered in between “NEW DAY ROCKS!” chants from the crowd. The best thing about the trio pulling material from black culture is that it’s not in any way forced. You can tell that this is genuinely how these guys talk and act in their real lives because it looks so effortless.

On multiple occasions, they’ve come out in the middle of a show, acted like lovable fools and made the most serious of opponents crumble under the pressure and crack a smile in the middle of the ring, including Randy Orton, The Usos and the League of Nations. They even got The Rock and immediately celebrated with a “Got EEMMMM!”

But even that isn’t what makes The New Day so wonderful. What does is how they so naturally bridge the gap between wrestlers and everyday nerds like us. The New Day is as outwardly nerdy as they come and it’s refreshing every time it comes out on screen.

Just this past Wrestlemania, they walked out of a giant box of cereal dressed as the Ginyu Force from Dragonball Z and even struck a pose before heading to the ring. Xavier Woods had his hair shaped to resemble Vegeta’s. How much nerdier can you get, my dude? I’ll tell you, not much. But they still manage to take it up a notch anyway.

To further embrace their nerdiness, Xavier Woods, who was recently working on a PhD in education, has his own YouTube channel called UpUpDownDown where he regularly features other wrestlers and WWE employees as he manages to conduct interviews while playing video games at the same time.

These games could be as recent as the latest Madden or Street Fighter or as old as the original Frogger, depending on the guest. He also has regular contests where losers have to eat a spoonful of cinnamon, get hit in the back with a tennis ball or face some other hilarious consequence. It’s honestly a blast to watch every week.

But, let’s be honest for a second, watching wrestling once a week may be the closest many nerdfolk come to following sports on a regular basis. Some may not even do that much. UpUpDownDown is a window of opportunity to get in while the getting’s good and ride the wave with the rest of us.

Watching The New Day come up with new ways to make us all cry tears of laughter with the power of positivity every week has left us with no choice but to announce that they’ve earned the official Black Nerd Problems stamp of approval.