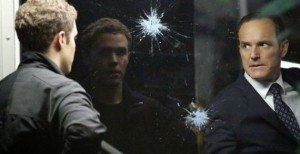 This is monumental because this is something that hasn’t happened since the first episode….which was 16 episodes ago (once everyone realized Joss Whedon was only directing the first episode). Part of the newfound buzz is mainly thanks to it marginal tie-in to Captain America: The Winter Soldier. I wouldn’t have guess that movie would be such a resounding success all across the board, it’s curative powers would trickle down a show that has spend the better part of it’s opening season like a Dawson’s Creek character trying to find itself.

This show was always something of an experiment from the start. It’s meant to be 50% a stand-alone series and 50% a supplemental Hype Machine powered by the latest addition to the Marvel Cineverse (Winter Soldier, Thor: The Dark World, Phil Coulson). The problem is that the second wave of Avengers related films, despite their success in the box office, were met with questionable results among the eight cylinder engine of fanboys that are a necessary Hype Machine all their own. Thor: The Dark World was immensely fun and entertaining, but after all that destruction of Nondescript Alien/God Stuff, it had a fiercely unmemorable villain (which is tragic considering how awesome Comic Malekith is) which just leaves the remnants of Nondescript Alien/God Stuff which isn’t the most interesting springboard to branch off into varying plotlines with.

Even if you go with Phase One…is Phil Coulson an entertaining character? Sure. Were we sad to see him die in Avengers? Of course. Was the Fanboy Hype Machine united in happiness when Marvel announced he’d be one of the principal characters (or, let’s be honest, THE character) in a primetime Marvel series about spies doing spy shit in a superhero universe. Hell Yes. But this is treading a different ground than most. In defense of Marvel’s writing team, when someone dies in television, you usually want to give some sort of explanation as to why for fear of the plothole whores. On the other hand, this is Comic Book Land where the reasons for resurrections are insanely vague purely out of necessity because, ultimately, we don’t particularly care why a character we like is back (even though, really, they’re back because we like them). With that said, it probably wasn’t necessary to drag out the hanging “Why is Phil Coulson still alive?” plotline if the explanation is just going to be “dead alien DNA” or whatever the fuck that is in the basement.

However, Captain America: The Winter Soldier, a movie that is, quite honestly, Marvel’s most fully formed superhero movie yet (for reasons I won’t retread) taps directly into the things we expected out of this show pretty much from the start. It had espionage, double/triple crosses, political intrigue, fighting, standoffs, people gunned down in cold blood, etc. You finally got the feeling that Phil Coulson’s A-Squad was playing for actual stakes. This is essentially what a well done crossover tie-in looks like on primetime television. Honestly, this is the sort of place Agents of S.H.I.E.L.D. should stay in. And hopefully, it’s a lesson to Marvel that if you’re going to put out product based on major releases, make sure your major release is Grade A. Hopefully, since they’ve been clearly making up the second half of the season on the fly anyway, they’ll take this and run with it.

Or maybe they won’t. Because, you know….Hollywood and shit.