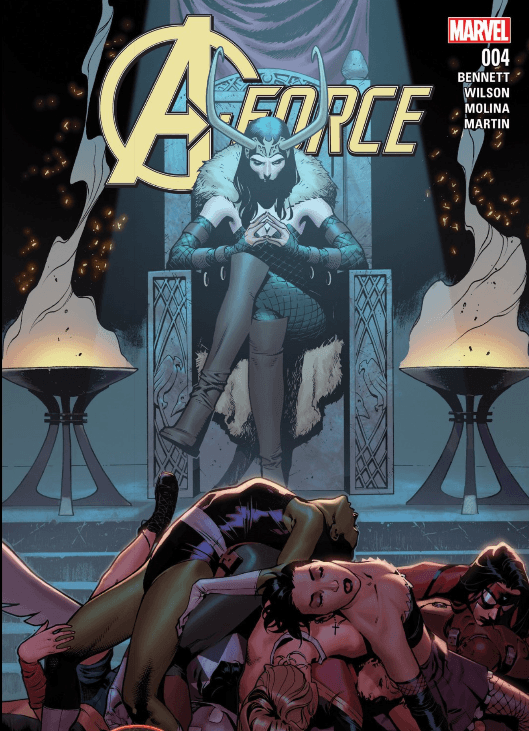 I am enjoying this comic for all the reasons! So I’m happy to know there will be plenty of it to continue reading (and reviewing) for the foreseeable future — including G. Willow Wilson as the lead writer! It is a great balance of action and plot, the pacing is spot on with no dull moments — just breaths between beats — and the art is among my favorite out right now. Molina and the other artists keep delivering great eye-candy, and our superheroes are beautiful and varied with intense, emotional faces.

Plot-wise, three of A-Force come to the fore: the mystery girl, Nico, and of course, Loki (she is the villain after all). This is the issue where young mystery girl comes into her own. In my mind, I think of her as an incarnation of Eternity, but the press coming out of Marvel calls her Singularity. In either case, the comic doesn’t name her, keeping her powers and origin an open question. The beautiful collection of star-dust flexed her powers in the previous issue and now demonstrates that not only does she basically contain all of space, but that she also contains our emotions as well.

As A-Force regroups, Loki shows her true ambitions, ambitions we never doubted. Loki’s gotta be Loki in the end, so the fact that she’s the source of all the trouble shouldn’t even count as a spoiler. And she plays the Thors perfectly, proving again that they and God-Doom aren’t as interested in justice as they are in peace. It all comes to a climax with the fight we’ve been waiting for between Loki and She-Hulk. It is impressive and both of them stay true to form in both the fight and the banter. But in the end, it is Nico who gets the last word.

Nico really is the star here as she continues to mourn her lost friend America while also coming to terms with the fact that her mother-figure, Loki, is true only to herself.

This is a classic story told well. It isn’t surprising and the “twist” — oh, Loki is the villian! — isn’t. But the characterizations are true and believable. The all-women crew works well and never resorts to stereotyping while also remaining distinctively women, centered in their own paradise. Next issue is the conclusion of this arc, making way for the all-new, all-different A-Force which continues on after the end of BattleWorld. So much to read, so little time.