“Their powers being bestowed by a mysterious island, six friends came together to fight injustice. Dedicated to peace and freedom, their only desire was to help other people..and to serve humanity until their final breathe.”

Mark Millar’s follow up prequel series to Jupiter’s Legacy is an inherently different collection of literature, but stands tall on its politically-charged themes and angles. Set in 1959, we follow the group of lucky souls who have powers bestowed upon them by a mysterious island 3 decades earlier. Being in the prime of their lives, The Union is busy puttin’ the beats on alien cephalopods, attending swanky L.A. parties, and getting blackmailed by one of the most notorious politicians in American history.

I was very surprised to see Millar not jump right into the reason George went all Harvey Dent supervillain on the Union. Instead he gives us a snapshot of what I should’ve expected; the team responding to a crisis situation in North Carolina, taking the beast down, then throwing out the idea to get their party on and celebrate a job well done! Being the only superheroes on the planet gotta come with a few perks right? 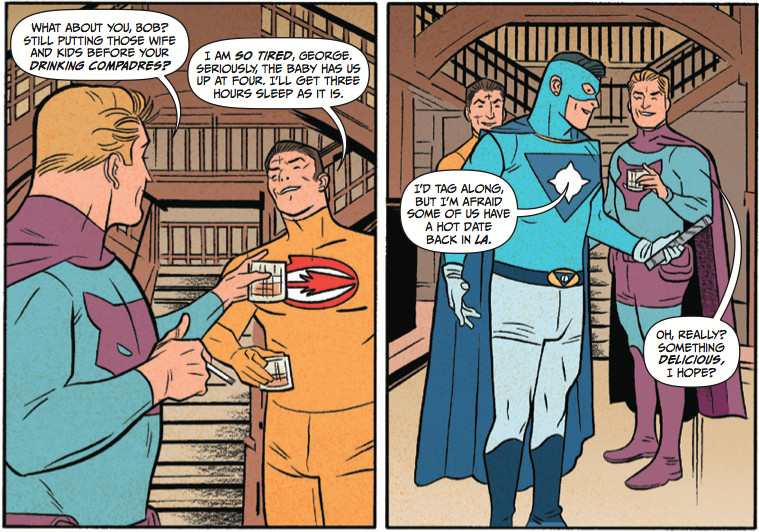 One thing I noticed while enjoying this post-battle soiree at headquarters was the straight up J. Edgar Hoover hate! Thennnnn I remembered this movie and it hit me that Hoover was a sneaky intrusive little snake, and I was down with the hate.

Side bar: Sheldon is a straight up boss! And so the seeds of the revolution were planted.

At this point in their lives, it seems Lady Liberty and The Utopian haven’t started down their romantic path just yet. In lieu of that storyline, we get a look at someone who wasn’t highlighted much in Legacy. Richard is a man living a triple life. He has a cushy job as a doctor by day, changes into costume and becomes Blue Bolt when needed, and hides his homosexuality by night.

This is the late 50’s we talkin’ ’bout. No public figure in their right mind with a family of political influence would ever come out of the closet during 1959, son. Just straight up didn’t happen. It’s a sad thing too. Why can’t the homie save the world and sleep with whoever he wants? Because, Hoover, that’s why.