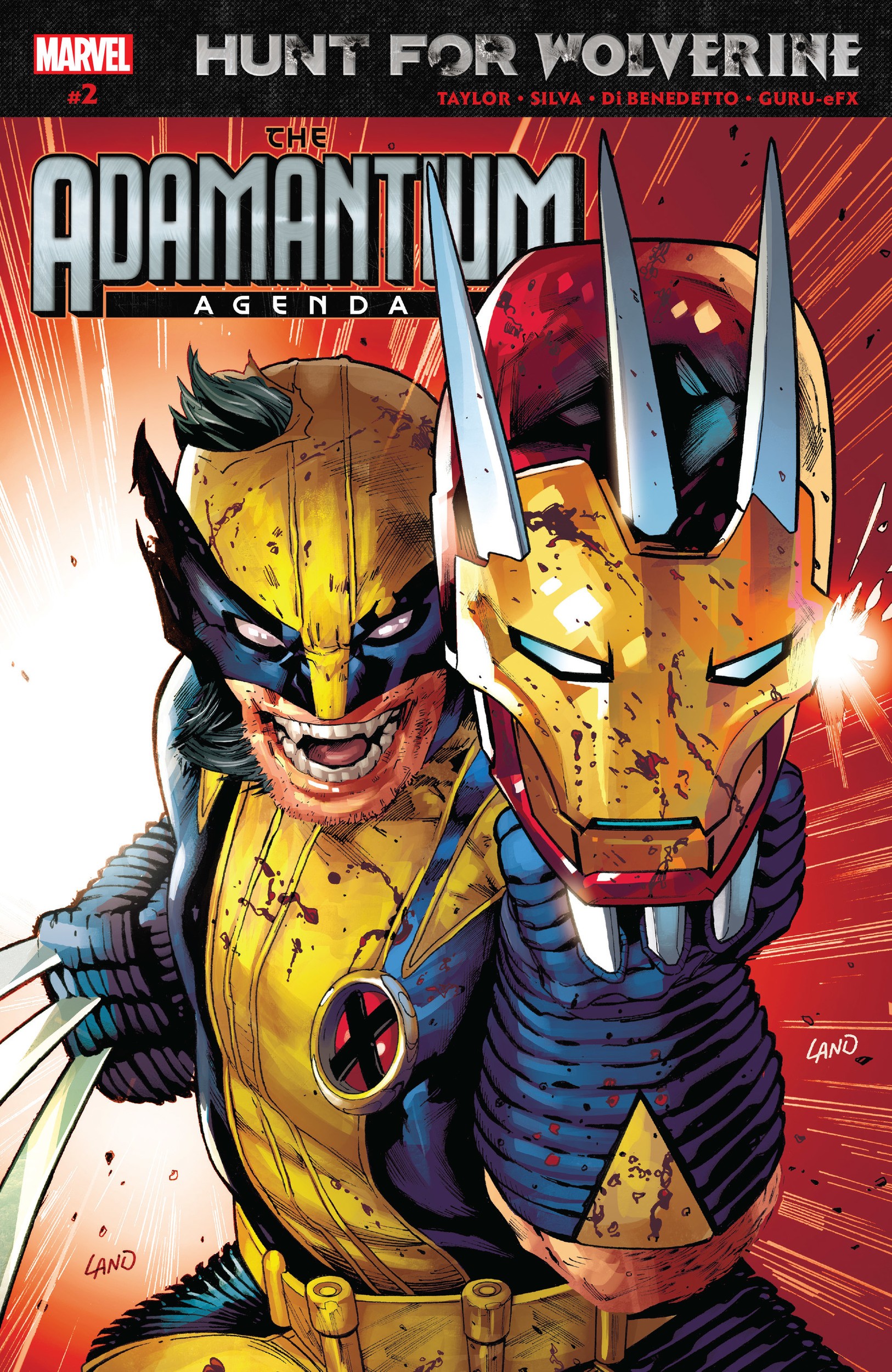 The New Avengers ride again.  In the previous issue of “Adamantium Agenda,” Tony Stark gets the band back together for a mission to infiltrate an underworld auction on a submarine.  Spider-Man, Jessica Jones, and Luke Cage join him, hoping to disrupt what they believe is the auctioning of Wolverine’s DNA sequence. In reality, the criminals are slanging the genetic material of Danielle Cage, daughter of Luke and Jessica.

Just as in the first installment, issue two begins in flashback, revealing more of the event in which Wolverine self-detonates a bomb in order to save Tribeca from turning into radioactive Poptart crumbs.  Logan, being the best there is at what he does (most of the time), survives after much of his skin, organs, and tissue are melted off from the radioactive fallout. 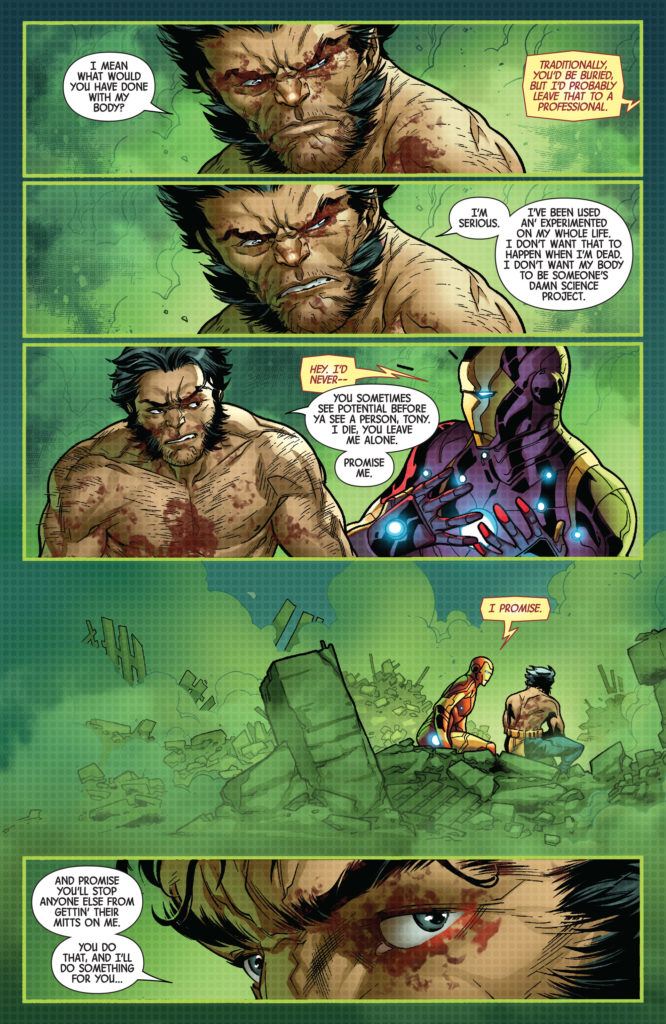 Back in the present, Stark intends to make good on his promise to protect Wolverine’s most dangerous asset. While “disguised” in a ridiculous masquerade mask and helping to ease the fears of Luke and Jessica, Stark purchases the DNA of Danielle Cage before finally learning that Logan’s DNA is on offer as well. Before he can complete the deal, however, Mr. Sinister emerges to punish the thief who stole the DNA sequence. In the chaos, Laura Kinney appears, discarding her own disguise and slicing off the pasty eugenicists’ hand without a second thought. The plot thickens…

After so many instances of “fridging” in popular culture (“Deadpool 2” being the most prominent example of late), let us consider another tired and biased trope. For the sake of giving it a namesake, let’s call it “Caging.” In order to stop the submarine from sinking after Spider-Man diverts a blast from Mister Sinister, Jessica Jones shoves her husband, Luke Cage, against the hole to plug the leak. Spider-Man then sprays Luke Cage against the hole to lock him in place.

Not only is Luke instrumentalized against his will to solve a problem created by Parker in the first place, he is literally thrown against the problem by his own wife.  Normally, this moment would not play so awkwardly if the heroes were acting in a synchronized group dynamic. The majority of the issue focuses on the ‘good ol’ boys’ dynamic between Parker and Stark – in one scene, in particular, they nerd out over Nazi technology.   With Cage and Jones being relegated to a few one-liners, “The New Avengers” feels like the Tony and Pete show with the lone African-American and female character present for muscle, flat jokes, and a dropped Macguffin regarding the DNA of Danielle Cage.

The verdict then is that anytime the sole POC character in a plot is issued against his/her will to solve a problem created by irresponsible or impulsive white characters, that character is being CAGED – literally and figuratively.  Take a moment, and think of how many other stories utilize this same narrative device.  Even easier, just think about the history of the world after 1491. 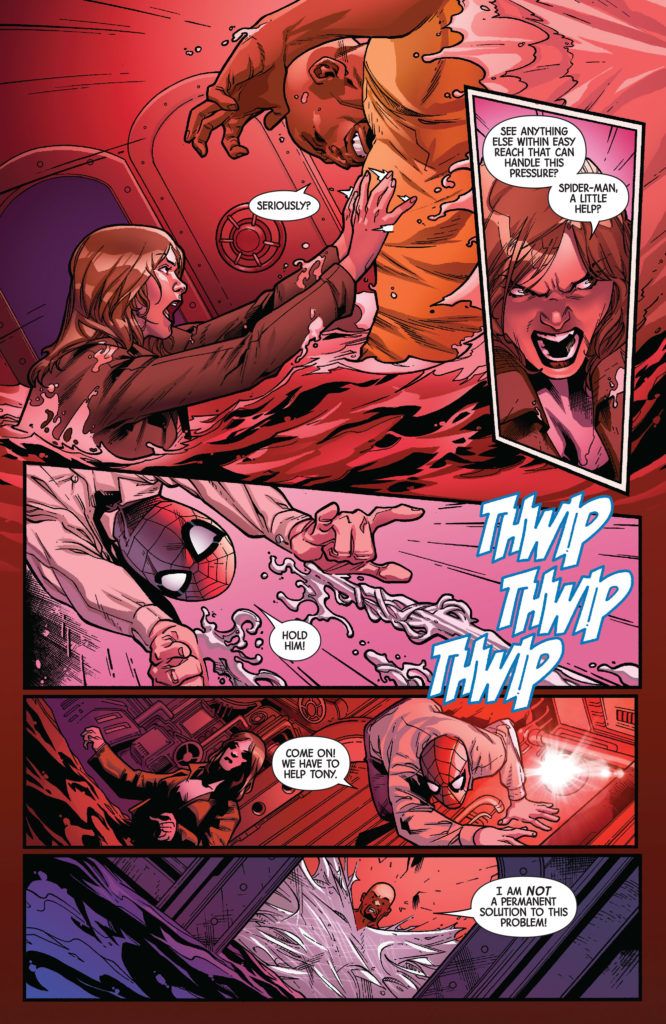 Overall, this issue retains the “90’s action/adventure buddy flick” vibe alá “Bad Boys” or even “Lethal Weapon.” Very comfortable in tone and style, Tom Taylor’s script plays it by pretty safe – the reveals are not that much of a surprise (Laura Kinney/Wolverine), or they just feel silly and forced (Mr. Sinsiter). The most interesting conceit is the opening act of the comic, which takes place fully in flashback, revealing the promise Stark makes to Logan in regards to protecting his body if/when he really gets bodied.  In that simple moment, we see the men behind the masks, armor, violence, and explosions.  Visually,  RB Silva provides smooth, fluid, and clean layouts and art that keep it all flowing. The action is big and the banter is plentiful, but the mini-series is highly skippable unless you are a huge fan of Luke Cage and Jessica Jones (both are currently without ongoing series)

Check your wallets and the extent of your interest because Marvel is playing the long game here, and it is not for the best.  In fact, the worst part about all of this is knowing the 16 issues of the four “Hunt for Wolverine” mini-series will then lead into another mini-series called “The Return of Wolverine.” After that, expect a new Wolverine monthly series in the Fall of 2018. Since his reappearance in October 2017’s Marvel Legacy #1 with an Infinity Stone, Logan has made brief appearances in the back of various comics via the “Where is Wolverine?” end scene tags. The death and return of Wolverine merely repurpose the same problem with Wolverine that led to his being sidelined in the first place by the “Marvel Powers That Be” – oversaturation.

5.5 Submarine Traphouse Auctions out of 10