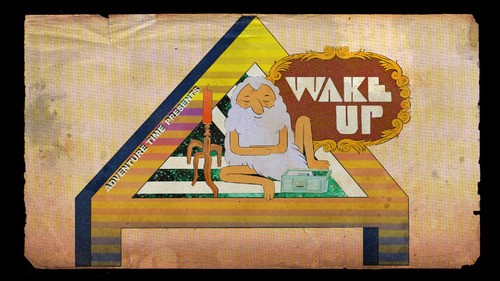 WELP, Welcome back folks! If you clean out the cobwebs in your brain, you’ll remember from how the last season left us with our feelings in buckets, Finn had a chance to finish a bucket list that belonged to his hero Billy who was felled by the Linch. After doing so he finds the closure he needed, and as a parting gift by Billy’s manifestation in the stars is told to find his human father who can be found in the Citadel.

Jake, who has been a party animal at Prismo’s, has seen some crazy stuff. Being a wish granter means you have an eclectic gathering at your epic parties and better yet opportunities to do epic stuff…like take selfies with a passive –not-not-bent-on-murdering-you-and-your-friends Linch.

The Linch while imprisoned inside Prismo’s awesome lair aka “Time Room” cannot function the way he usually does—causing chaos and destruction. Within this time room is is harmless, still creepy but harmless.

The guys seek the advice of Prismo because they need to know to reach the Citadel; according to Prismo, one must commit an cosmic crime! He sends Finn and Jake on a mini quest to retrieve an sleeping old man and to bring him to Prismo’s pad unscathed and still sleeping.

Once our heroes return Prismo reveals that he, his existence is a simply a dream, the dream of the little old man slumbering in front of them! The boys are distressed when Prismo tells them to enter the Citadel, “Killing” him would be their way in for it would be an cosmic crime. Both Finn and Jake object but Prismo guarantees that he’ll be back, as LONG AS THE SLEEPING MAN IS PUT BACK TO SLEEP.

It is then when the Linch (remember him, hanging out in Billy’s body sitting in a corner creeper status and all) throws a serious monkey wrench into the plan by grabbing old man Prismo which wakes him, does away with him and hijacking his way to the Citadel…..did I mention HE KILLED PRISMO!1111?????

“Escape From The Citadel”

With no time to waste Finn and Jake tag along and enter the Citadel with a eager Finn looking for his long lost father. Finn is convinced that his father is a warden or some kind of do-gooder since the Citadel is a prison and it would only make sense that most of its inhabitants would be criminals.

The Linch starts screwing things up again as usual just as boys find Finn’s father imprisoned in crystal. Finn and Jake bust him out and he immediately jets after hearing that he is the daddy of our dear boy Finn.

He couldn’t have moved faster than the paparazzi whenever Kayne West is out and about in public.

Dude couldn’t have moved faster if one of us suddenly announced that we were all now playing a game of “The Ground Is Lava”.

He couldn’t have moved faster than the immediate time it takes for a claim of reverse racism or a cry of “Not All Men” when a legitimate dialogue about the perils of being a woman is started.

So this fellow bounces with Finn and Jake right behind him and when a sudden accident befalls him with a way serious injury, he plays the sympathy card to get Finn to help him. Did I mention his name is Martin? Martin with a forreal nasty flesh wound plays Finn to get him to procure some magical properties junk nearby that will fix him right as rain.

With the junk on his hands and Martin hurriedly pleading him to fix him, Finn shoots dude the million dollar question:

“Why did he leave baby Finn in the forest?”

Yes. What are we, 150 episodes in, now in Adventure Time? Just why did Martin abandon his son Finn? Was it a last ditch effort to save him while on the run from mortal enemies? Was he coming back to get him? Where has he been this whole time? How did he end up here?

The Linch reemerges and when Finn and Jake prepare for a epic showdown with Martin but when they turn around he jets off once again.

When things look hopeless in battling the Linch, Finn accidentally throws some of that magical healing gunk at the Linch which effectively stops the Linch in his steps and starts a transformation that is turning him into something…entirely new.

Back to Finn—while chasing after the dead beat known as Martin he tries his best to hold on to a piece of the star skipper that Martin is attempting to escape on (with other criminals)….

Jake sees Finn in trouble——the grass sword is expanding and mutating abnormally (Like crazy gross Akira stuff. Ugh)… he yells out to Finn to let go.

To let go of the chance to keep up with Martin

To Let go of his only (human) family, the only link to who he “is”

Finn does not and…

The grass sword implodes, hell maybe it explodes sending Finn straight into the crystal waters below missing most of an arm. A piece of the magical healing gunk clamps on the stump of whats left of Finn’s arm producing a tiny flower on a steady stem.

This episode ends with Finn in Jake’s arms minus an arm, Prismo dead and the end of a dangerous Linch.

2.) Save Marriages on The Brink Of Divorce

3.) Become A Florist or at least get a green thumb