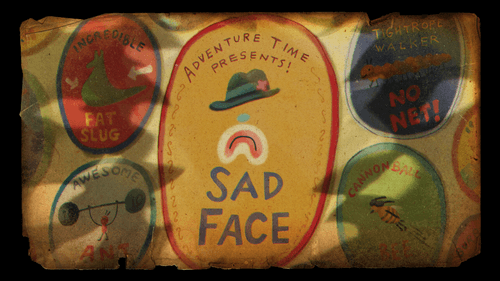 So we’ve seen Jake in a number of different situations during his adventures with Finn:

We’ve seen him sweating cause IT’S GONNA GO DOWN:

We’ve seen him happy, moved to tears about being a daddy:

But this episode we see him doing just this: Yup. The best thing is it’s only a body part of Jake that’s getting all the action this episode.

scheming away in the middle of the night. They are waiting, anticipating for a special event that happens only once a month:

And finds it’s way to a circus?

A circus run by insects for an insect crowd?

Where Jake’s tail is called “Blue Nose” and once he’s in makeup, puts on a mini-show

That is too “Artsy” and not enough “Fartsy”.

WELP. Let’s see where this goes: Another Star of the show, “Gordita”, captured chipmunk is unruly and terrifying until “Blue Nose”, aka Jake’s tail eases her into a hypnotized state and calms things down.

Later after the greedy circus ring leader blabs about unkempt promises and the monies that they’re now racking in, we learn that Blue Nose has repeatedly requested that Blue Nose be released back into the wild where she belongs. He racks his head (?) for ideas for a specular show that will blow the minds so Gordita won’t be needed anymore.

He succeeds, making the crowd roar with laughter and shower him with applause and money (much to his dismay about the ruin of his craft)

The crooked circus ring leader celebrates the success of Blue Nose’s newest, crowd-pleasing set and then goes back on his word by bringing Gordita back in. He tells Blue Nose that he has no inkling to get rid of her now that he has two superb, money making circus cats now.

AND THE CROWD EATS IT UP,

THINKING IT IS APART OF THE SHOW.

Then, he runs off into the night with Gordita.

BUT, oh no he pulled back by the muscle of the circus and pushed around a few times, they aren’t happy and aren’t shy to let him know. Before things can escalate, dawn arrives and the tail freezes and starts it’s descent back, across the lands back to the boys’ treehouse. It snaps back to normal size, awakening Jake in the process and Neptr and Bmo snicker away.