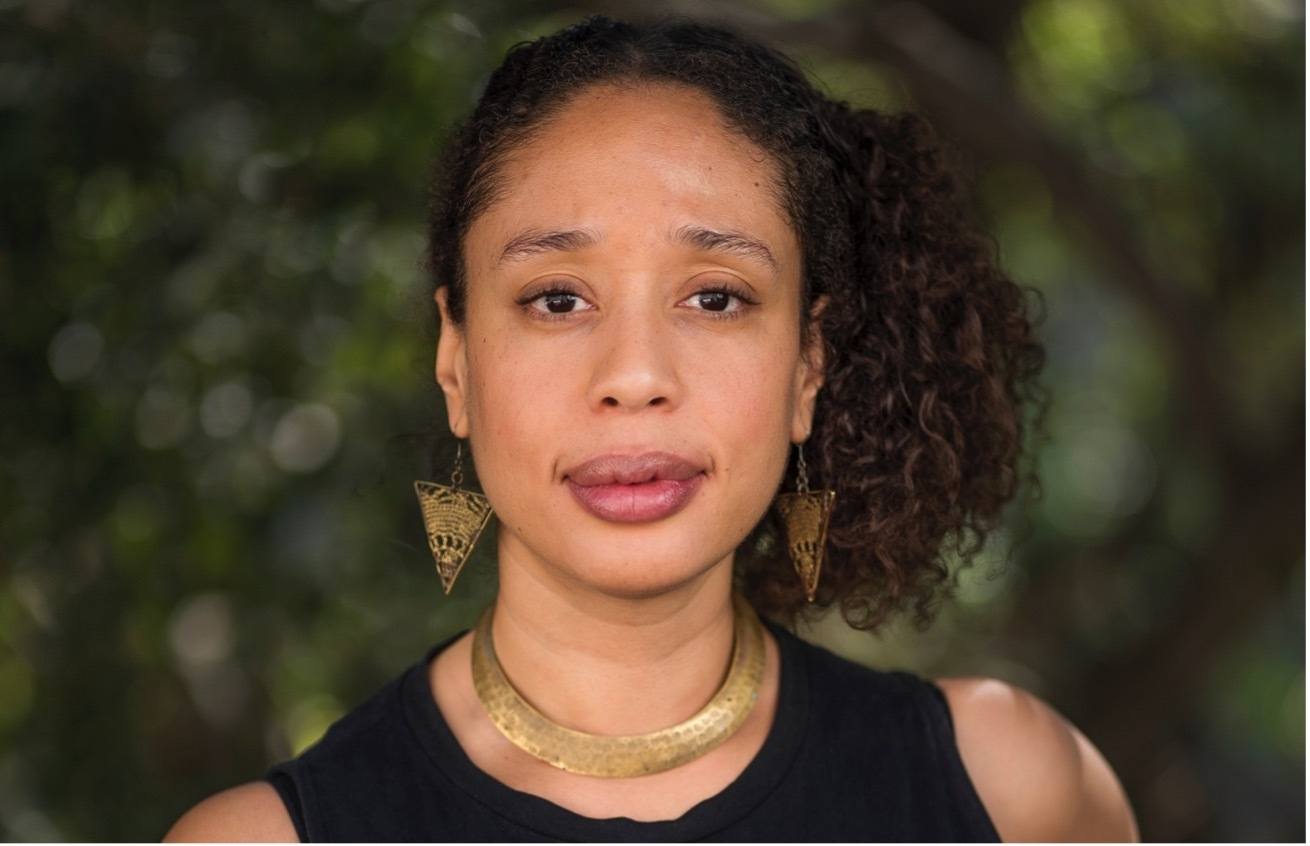 There’s a scene where Phyllis—an assassin in 1940s Harlem—refers to a then-recent author, Zora Neale Hurston. It struck me for a moment that Their Eyes Were Watching God would be “popular” but not yet “famous,” at least not in the context of today where Hurston’s novel is widely known as a classic of its time period. It was one of many moments that pulled me from my modern understanding and helped place me in the wake of the Harlem Renaissance, which was much of the reason I was excited for this interview sponsored by Trouble the Saints‘ publisher, Tor Books.

Because it also sparked the question: what might I read that people in the future will take for granted as an obvious turning point in Black writing? The simple reminder makes reading books like Trouble the Saints, a historical fiction novel by Alaya Dawn Johnson, a dual experience: on one hand, being transported back in time to feel the Black experience in another context, and on the other, appreciating the still-growing availability of Black historical fiction—particularly non-slave-based ones.

I spoke with Alaya on what that experience is like from her perspective as the author, what makes appealing characters, and how the ones in her book, Trouble the Saints, can push back against the tide of white power. Trouble the Saints is available now wherever you get your books, but of course, I recommend your local indie. In the meantime, get started on the first chapter.

The book is set just after the Harlem Renaissance, and there are nods to then-recent Black works that would later become iconic. Did you have the story idea for these characters and their gifts, and Harlem felt like the natural fit?

My first introduction to Harlem was when I moved to NYC to go to college. I was in Morningside Heights, and the relationship between Columbia University and its neighbors was not great. The university is one of the primary drivers of the super-gentrification of the immediate neighborhood and further north, and I ended up covering a lot of that impact as a reporter for the student newspaper. I had a complicated relationship with Columbia myself, but I was always grateful that it gave me this entryway into the magic of NYC and especially Harlem.

I ended up living in the Bronx for a while and would go down to Harlem a lot. I was always fascinated by the history of it, most particularly its literary legacy, and I loved hanging out in the coffee shops to write (and occasionally listen to open mic nights). It felt very natural to put Phyllis’s background in Harlem, both because of the literary resonances as well as my own personal connection to the place.

And, of course, Harlem was the beating heart of New York City’s numbers racket, which became a central part of the story. The way white mobsters moved in on the Black numbers banks in the 30s ended up being the perfect parallel for Pea Green’s journey from simple numbers runner with a knack for knives to Phyllis LeBlanc, Russian Vic’s “angel of justice” that no one south of 110th street knows is Black.

There’s a lot of context to fit into the early 1940s. I imagine there’s a difficult balance to be struck between focusing on the obvious global event of World War II, the non-white experience in America, sex and misogyny, and Harlem. Where did you hope the reader finds emphasis?

The funny thing about historical fiction is that you could set two novels in precisely the same year, and even the same physical location, and still end up with wildly different stories. So, part of what you’re referring to is just the work of any historical novelist: figuring out what aspects of history are most relevant to the characters you are following and the story that you want to tell.

Now, some global events are so large that they will affect everyone in some way. The Covid-19 pandemic is like that. Historical novelists of the future will have to reference the effect of the pandemic on their characters in the years 2020 and 2021, pretty much no matter who or where they are. On the other hand, that shared experience is by no means homogenous.

So that’s how I handled World War II in Trouble the Saints—the characters are coming at the conflict from a very specific worldview, and that means I’m not going to tell the story in the way that we’ve become accustomed to by decades of American mythologizing. Dev gets drafted but doesn’t know if he’s going to be in the Negro units or rejected for not being white. All of them have extremely mixed feelings about the prospect of war and its potential impact on their communities. But all of these realities—the big Historical Event and the smaller, brutal historical realities of misogyny, colorism, racism and violence—intersect and inform one another, to weave the tapestry of three lives.

Speaking of the non-white experience, there’s some pretty different perspectives offered. Phyllis can pass as white, Tamara and Dev cannot, and I found myself especially interested in their navigation of their proximities to Blackness (and to one another). Do you see race as affecting each of them to similar degrees?

The ways that race and the violence of white supremacy affect Dev, Tamara, and Phyllis differently is central theme of the book, for sure. Each of them has a power, which is a mark of their relationship to a legacy of oppression and resistance. Dev isn’t Black while Tamara and Phyllis are, but as you say, Dev can’t pass as white while Phyllis can.

There are ways in which Dev’s identity as a “Hindu” (how white people commonly referred to Indian people at the time, though he’s also actually Hindu) allows him limited access to white-dominated spaces, including a space that is historically (and currently!) a bastion of white supremacy: the NYPD. Phyllis, on the other hand, is explicitly playing on the inherent violence of white supremacy by passing and using her power to help a white mob boss, though she imagines that she is meting out justice. Her reckoning with that choice is the central moral dilemma of the novel. Tamara is her best friend who has also decided to use proximity to whiteness as a personal shield (they’re all involved, in one way or another, with the white mob, after all).

Whenever I read books about murderers, there’s always something (or many things) that make unsavory people lovable. What types of characteristics did you want to leverage to make Phyllis, Dev, and Tamara endearing?

It’s funny—I know that Phyllis is a murderer and morally suspect and probably not someone you want over for Thanksgiving, but I’ve always liked her. I think it’s her desire to do better, to examine herself and her choices that I find appealing. I certainly never got tired of her, and that’s saying something in a book that took seven years to write!

I also love her relationships with the other principal characters, Dev and Tamara. To me, it isn’t precisely humor or cool settings or snappy dialogue that makes characters appealing, it’s being able to appreciate their best and worst qualities in honest and vibrant relation to other characters. Give me a beautifully done relationship—friends, lovers, ex-lovers, enemies—and you’ll find at least two characters I love to read.

As for my favorite, that would be like picking my favorite child or something (if I had children). I love the way each of them is like a string that, when plucked, creates harmonic resonances with the others.

You wrote much of the book abroad, and writing always feels different in a new setting, usually for the better; but in this case, I imagine it could feel pretty different from your book. Did writing abroad make it harder to feel in the right setting?

I’ve been lucky enough to call Mexico my home since 2014, which meant that I drafted most of the novel and did all of the revisions while living here. My experiences as an immigrant are my own and probably not typical of many (though there are a lot of aspects in common), but to me it was invaluable to be able to take a break from what had begun to feel like the hothouse atmosphere of NYC, much as I love it.

I didn’t have the money to be an artist living in the city (who does, these days?). I needed to write this novel, but it was tricky and dense and impossible to sell on spec (i.e., before I’d actually finished a draft). Mexico gave me a new language to think and exist in, a place to write without the financial and social stress of NYC, and a whole new perspective that I was eventually able to integrate both into my writing philosophy and the work itself.

Honestly, I don’t think I’d ever have been able to write it if I’d stayed in the states. It was too much of a risk, and I didn’t have any margin for risk-taking there. I probably would have revised the novella that eventually became Trouble the Saints (what’s now the first section) and published it. In a weird way, the best way for me to write about the New York City of my heart was to leave it.