Ali Wong gotta be the hardest comedian in the game. Easily. Hands down. Her first Netflix special Baby Cobra was incredible. I’m still upset I didn’t get the chance to review Baby Cobra because I found out about it months later. When Ali Wong’s second special ‘Hard Knock Wife’ was announced, I did the Birdman Handrub but was nervous. I was afraid that it may not live up to her first special. Yeah, that is not the case at all. If ‘Baby Cobra’ is a kick to the gut then ‘Hard Knock Wife‘ is the Bast damn Stone Cold Stunner.

This special starts off with Wu-Tang Clan’s triumph playing. You know shit is going to be real rap raw if ‘Triumph’ is playing. That’s a statement. Ali Wong’s Hard Knock Wife works like an actual sequel to her previous comedy special. Ali talks about the Monkey’s Paw situation of being a stay at home mom. In Baby Cobra Ali was envious of the stay at home wife. Well, now she got her wish (kinda) by staying home but the mom part? “It’s a wack ass job. You’re in solitary confinement all day with this human Tamogatchi that has no reset button”. Ali lets you know the tone of this special early and the bars only get more vicious. 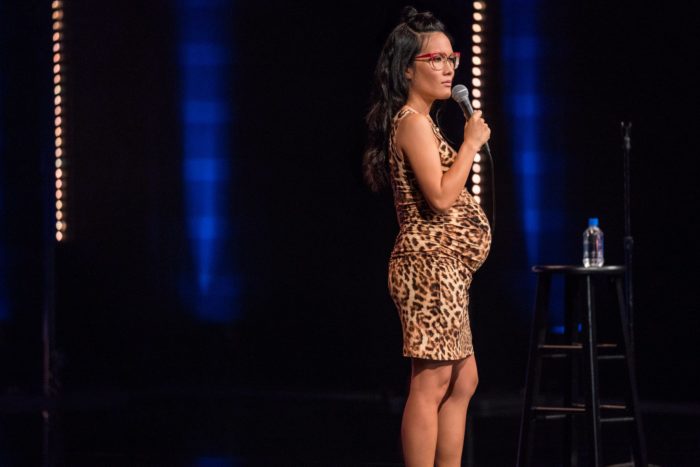 It’s a Hard Knock Wife for us

When Ali talks to the audience about being a mom, giving birth, dealing with a newborn and the perils of breastfeeding, she does so in a way where it feels like a conversation with a friend that needs to vent. Ali is able to talk about being a mom and then tie it into social commentary for issues that both stay at home moms face with the bar being low for father’s to be considered a good dad, as well working mothers in regard to maternity leave. Ali makes an audience feel like they’re shooting the shit with a friend and catching up in a conversation that starts out about motherhood but smoothly transitions into the gender bias and sexism that comes with this new status.

Ali talks about motherhood but doesn’t pigeonhole herself. When she starts talking that sex talk, man. Your girl is raw as fuck. Dick sucking jokes, P**** eating jokes, ass eating jokes. What I love is that they aren’t easy shock appeal sex jokes. They’re precise, gritty, intricate, and raw as fuck. Ali does the deep dive jokes you make with your friends. She honestly feels like a throwback to the Kings of Comedy / Def Jam era rawness. Your girl doesn’t give a fuck, which makes her one of (if not the) best to watch in the game right the fuck now. The best Ali Wong set punchlines are when she gets incredibly detailed with description. 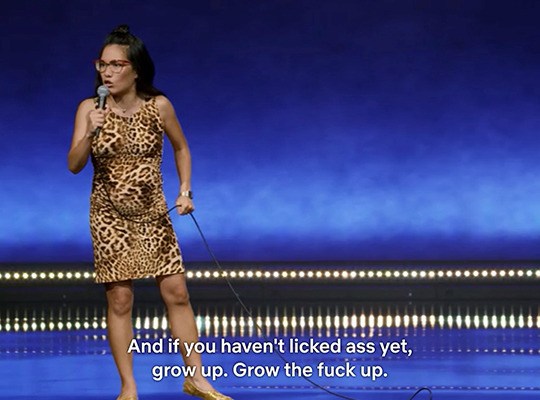 “If we had hired a 25-year-old man who was… not ugly, great with my daughter, and said yes immediately to every chore I asked him to do with a positive attitude? Oh, you best believe, I would eat the shit outta his butthole. Every day would be an all-day nanny butthole buffet.”- Ali Wong

A genius at work

I can’t name another comedian that kills the visual description game like Ali Wong. Your girl is a different type of monster on that stage. From the way she manipulates her cadence, her comedic timing, makes you think the punch line has come then uses ellipses in real time (comedic pause) like Max Payne’s bullet time, slowing the tempo for the audience and allowing them to laugh/catch their breath before taking the joke farther or to another level. If we’re being Bret The Hitman Hart (technical) about it. Ali Wong’s pen game is like a submission specialist. Each joke and reference works different parts of the audience before deciding which limb (joke) she’ll take in order to go in for the kill.

The growth in her pen game is evident when her comment on Mexican culture (which had me nervous aw man where she going with this) opens up a spotlight upon a town in America where Mexican and Filipino culture butt heads. Ali flips this shit into a social studies class through an incredibly calculated and well-played bit that shows how much influence a culture can have upon popular areas of America (no spoilers, you’ll know the bit when you see it). Physically, Ali uses all of her body in short and long bursts for emphasis. A graceful pivot of a foot or an aggressive rapper crotch grab keep you guessing on what direction each joke will come at you.

However, her facial expressions bring another layer to her delivery. Best in the game. She can switch from deadpan ice water in the veins to disgust, joy, distress, excitement. It may seem like such a minuscule detail to acknowledge but it brings such an important element to her comedy. I also love that she was pregnant again for this comedy special but unlike her first one, she makes no reference to it at all. On some “Nah, you ain’t getting that story.” 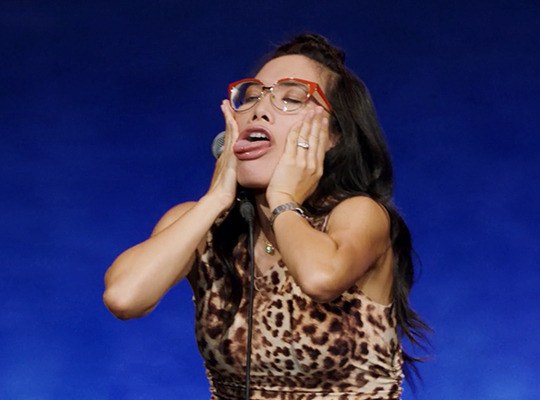 Miss me with that “women aren’t funny” shit

I dunno how the “women aren’t funny” notion came to be but that shit been nothing but a lie. Women been funny as fuck, man. They just haven’t been getting the credit they deserve. This is only Ali Wong’s second comedy special but Lupe Fiasco said it best, “Top 5 alive and I only got 2 out!”. I feel like this bar applies to Ali. Your girl gotta be mentioned in the A1 top-tier comedians. It ain’t even a question. I thought the special was two hours because she tackled so much. That shit is only an hour man. I could not believe it. I’m convinced she’s able to manipulate the time stream. I watched with a group of friends and we all wanted her to keep going. That’s the mark of a true comedian. A tried and true storyteller.

All of which is to say, the Hard Knock Wife Netflix special is a fucking knock out. If you don’t see how skilled, blunt, and trill Ali Wong is then you never deserved comedy in the first place. Ali is blunt, cynical, and raw as fuck. I love how her sincere moments come usually after her most brutal or hard-hitting jokes. Ali is like a tootsie pop, she goin’ make you work to get to that sweet sincere center and it’s always worth it.

You can catch Hard Knock Wife now on Netflix. 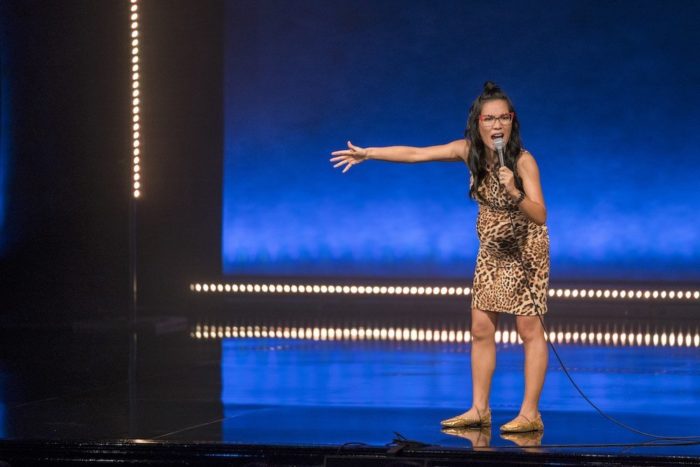