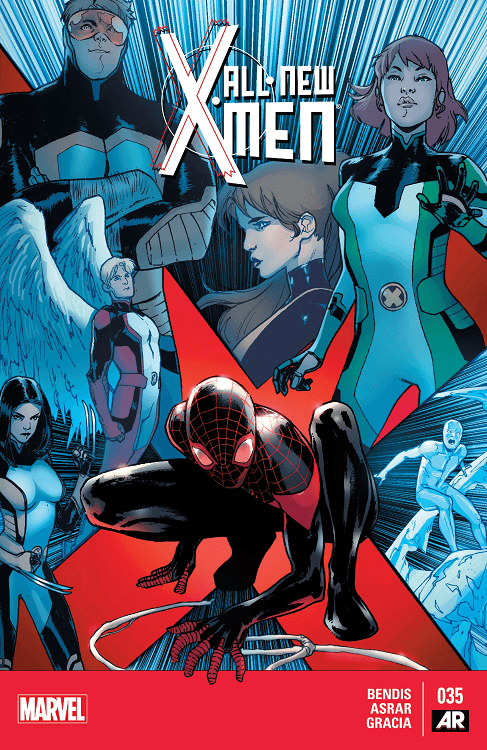 So, the All New X-Men have been trapped in the Ultimate Universe for at least three issues now with no sign of getting home in sight. As entertaining a ride as it’s been, the plot itself has slowed to a power walk. Seriously. I’m pretty sure I heard Captain America screaming “Coming up on your left!” as he ran laps around this plot. But Brian Bendis has started to get back down to the business of getting our underage uncannys home.

It looks like the party’s over in this issue where Young Jean Grey and Miles Morales, the only two people in this entire story who’ve done any real work, start making the rounds to find reassemble the All-News with the help of the Ultimate X-Men (who look a little different from the last time the Ultimate X-Men had a comic that anyone cared about reading). It’s nice that Jean Grey is really stepping up and taking a leadership role since Cyclops went to space to get away from all the crazy shit happening. But it seems like she really IS the only character actually trying on any level lately.

Meanwhile all the interactions between the Ultimate and the 616 X-Men are pretty hilarious and it’s nice to see this story moving along again, so Bendis is definitely on the road to redemption this week. On the visual end, Mahmud Asrar’s pencil work has been getting better since inheriting the book from Stuart Immonen, but the facial expressions are looking sort of generic and lifeless. And some of the faces on varying characters look at little too alike which is kind of a hindrance when you have a story about different versions of the same characters and giving everyone a very distinctive look is important.

Bottom Line: It’s good that the momentum is back in the plot, but some of the art’s weaknesses are a bit of a distraction. 7.5